Disease is something that is common to all living things. Bacteria, virus and even the body’s own cells can cause sickness and even death.
The classic “The war of the worlds” had these little guys saving the earth when the attacking extraterrestrials found they had no natural immunity to earth’s viruses and bacteria.
But there is the idea that some of these tiny killers are actually themselves from outer space with scientists proposing the theory that the universe is infected with many ALIEN DISEASES.
These space virus and alien bacteria sometimes manage to make their way to our little rock and could be the cause of some of history’s worst pandemics.
Are we living under the threat of a microscopic global killer arriving from outer space? 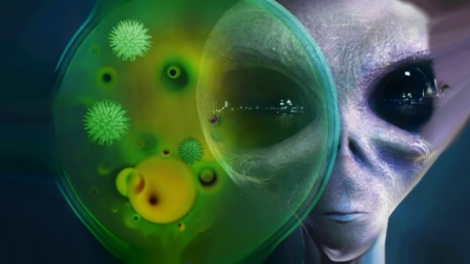 This theory has wide ranging implications and scientist say that if we can find space born virus they would prove not only the idea that they make their way to our planet but that universe can host life beyond of our planet.
This they say will create a “new age” in science.
Viruses outnumber all other living things here on earth, estimates claim that there are 10-100 times more numerous than any other organism on the planet.
These little guys are the most prolific and successful living thing ever.
This new field of study has been given the name “astrovirology” and it is a growing area of research as scientist develop new equipment to detect off planet viruses.
Astrovirology will be a combination of astrobiology and virology, the goal is to detect bio signatures and see if viruses do spread in space.
The consensus is that the first type of alien life that science would confirm would be a lifeform that would be comparable to an earthly virus.
Some say that looking to the heavens is unnecessary as we already have proof that a space virus has landed on the planet and caused chaos.
A theory put forward by Professor Chandra Wickramasinghe and Sir Fred Hoyle say that the virus that was to be blamed for BSE. The disease that devastated cattle populations around the UK and Europe, was from space.
The virus found on prions, the infected pieces of protein in a diseased animal , discovered in the stratosphere.
This virus surviving and remaining in the atmosphere after comet and meteor showers.
About 100 tons of cometary material hit the Earth every day, seeding the planet with alien viruses according to the theory being put forward by the two scientist.
On rare cases a space virus might find itself on fertile ground on which it can develop.
This is how the virus entered cattle.
The practice of farmers is to move cattle from field to field grazing on the fresh grass.
This exposes the bovines to a large area. Even if a small area had managed to host an alien virus the probability of that area being grazed by a farm animal or any animal is high.
This, then may have provided a gateway for the alien virus to enter a host, and from this point it can mutate merge with or even adopt and corrupt its host DNA.
The effects can be and were in the case of BSE fatal.
The virus was also spread by human activity 'Once it got into a few cattle, it spread quickly thanks to animal feed manufacturers grinding up parts of infected animals and including it in cattle feed.'
The two scientist champion the idea that these virus were what first seeded life on the planet and gave rise to all life including mankind, and that we are just as susceptible to these viruses as cattle.
Sub-saharan Africa 2004 more than a million people died of malaria.
Outbreaks of Dengue Fever, Hantavirus, West Nile Fever, Rift Valley Fever, and even Plague these diseases seemingly springing up from nowhere.
We know, that in fact these disease stem from other factors such as increases in the populations of mosquitoes, rats and other virus carrying animals.
The poorer parts of the planet are not the only areas at risks.
We have seen the spread of bird flu and swine flu. These viruses hitching a ride on modern air travel to jump continents and spread globally.
Should we be taking the threat of alien viruses a little more seriously, after all according to the two professors diseases such as the Black Death and flu may have had an interstellar origin.
Well maybe not, for all they harm they can cause, they also do good.
Viruses are incredibly ancient.
They have coexisted with cellular life-forms since the earliest stages of life, it is possible that they directly influenced cellular evolution.
“Viruses are the only entities on modern Earth to use either RNA or DNA in both single- and double-stranded forms for their genetic material and thus may provide a model for the putative RNA-protein world.”
This should be of some reassurance it’s a very rare event, if not nearly impossible that alien viruses would produce a nightmarish scenario of a global pandemic.
Summarizing the scientist looking into this phenomena said “Viruses have a bad rap. If we find viruses on other planets it is an indication of life, not something to be scared of.
Virus are amazing little things the liquid on Saturn and Jupiter’s moons or the sediment on Mars could be home to them.
A 2012 discovery found a completely new group of viruses that are capable of living in acidic hot lakes, essentially living in boiling acid.
This showed the extreme conditions viruses can survive in and in this case, the new viral genome emerged after the combination of DNA and RNA from two apparently unrelated virus groups.
So, as well as living in harsh environments, viruses can find new ways to adapt and evolve.
This means the idea of viruses being discovered across the universe is not so out of the realms of possibility.
So for those of us who long for the confirmation of alien life elsewhere in the universe we should have hope that this new field of “astrovirology” can and will discover a virus on another planet.
If, as the scientist proposed, they played a major part in the evolution of life on this planet it would be fair to assume they could do the same on another world.
Do you think we will find viral life on another planet?
Do you fear we may unleash some as of yet discovered disease?
Let me know your thoughts in the comments below