Immortality closer than ever

Immortality was one of the very first topics I covered on the channel. It was and is an interesting topic, in the ambitious quest to cure ageing like a disease advances are being made constantly.
It is looking that we may well reach a point when we can increase life expectancy significantly.
Could we be treated for ageing in the same way we are with other diseases?
As we learn more about the diseases which affect us, we are also improving in our ability to control them. Could we learn to overcome the most inevitable of afflictions – old age?
Can age-related disease be stopped?
Has the first immortal person been born? 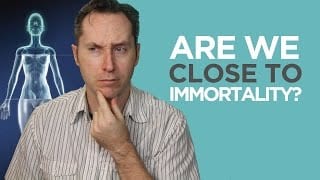 Medical science has an impressive record we have been able to defeat a vast number of once deadly diseases– polio, typhoid, measles, tetanus, yellow fever, smallpox, diphtheria and chicken pox have been almost completely eliminated in many parts of the world.
Vaccination programs have seen us beating back the once deadly bacteria parasites and viruses that once tore through populations decimating whole civilizations and at times almost bringing mankind to its knees.
There has however always remained one inescapable fact that is no matter how much we like to avoid it we all age and die. The best medicine, diet, exercise and environment can only stretch out lives to the early hundreds mark.
Most of us will be lucky to get there without any ill side effects from the natural process of aging. As time passes our cells stop working as well as they once did and can break down, this leading to conditions such as cancer, heart disease, arthritis and Alzheimer’s disease.
100,000 people per day die from the effects of aging and we spend billions globally in an attempt to stop or at least slow the steady march of time has on our bodies.
This is when a group of researchers step in, they believe that we are looking at the process of aging all wrong. We focus on treating the symptoms like the diseases we mentioned earlier, when what we should be focusing on is the cause. If we can cure aging by default we cure all the ill effects it has on our bodies.
A cure for aging could be a cure for almost all things that ail us.
These are not just the dreams or theories of futurist with utopian visions in their minds, there have been many recent discoveries that suggest biological ageing is something we could prevent and is treatable.
Looking at the human form they have learned that at least from a biological perspective, the body ages at different rates according to genetic traits and environmental factors.
Over time tiny errors build up in our DNA and our cells begin developing faults these then accumulate and present themselves as tissue damage. The amount of damage we incur as we age has a direct correlation to our health in the later years of our life.
It seems that old saying of live fast die young rings true.
A man who is on a quest to answer the questions which surround death is Dr.Josh Mitteldorf, the evolutionary biologist has been looking into the field of aging science and has made some very intriguing discoveries.
Most think that all life goes through a similar process of aging time passes bodies ware out and eventually the damage becomes too great and the organism dies.
This could, however be wrong, there is the possibility that we along with other creatures are genetically programmed to age at a set rate. He compares the process to the life cycle of a salmon.
Salmon are programmed to die after swimming up river and spawning.
He adds the only difference between the salmon and us is the time we get to swim upstream, so to speak.
Looking at the problem of aging in this way allows for treatments and therapies to be developed that lengthen the journey, extending our lives.
This is key, the longer we can live healthily the more chance we have of receiving the benefits of new treatments and the cycle will continue with those that received treatments continue to live on without aging until a new treatment comes along which extends their lives even more.
Almost reaching immortality.
Treatments are in development that will allow us to take the first step on this extended life journey, senolytic drug are in the works. These miracle treatments will selectively remove damaged cells from our leaving only healthy cells behind to reproduce. This could eliminate the formation of cancers and other diseases that form on a cellular level.
AND talking of cells, the source code to these is slowly be uncovered with the study of epigenetics (heritable changes that don’t require changes to the genome itself). Epigenetics.
This is when once again we meet Aubrey De Grey and his bold ambition to tackle and cease ageing.
De Grey discovered that the diabetes drug, metformin, had the ability of extending the lifespan of mice.
De Grey is the chief science officer at the Strategies for Engineered Negligible Senescence (Sens) Research Foundation, a California-based regenerative medicine research foundation focused on extending the healthy human lifespan.

The goal of De Grey is  to wind the clock the back for people over the ages of thirty taking them back to a biological state that is the same as when they were in their twenties.
This age is optimum for the cells and tissue to be regenerated quickly without the uncontrollable replication seen in cells when cancer occurs.
De Grey and his team at the Sens Research Foundation say they have identified ways for these problems to be combatted with the therapies that they’re developing.
Step one of therapy would be to have cell replacement therapy, using stem cells to replace and repair aging cells. There is some opposition to this research and De Grey names this “the pro-ageing trance”, this holding back the advancement of anti-ageing technologies.
Most societies find it hard culturally to accept ageing as something that is unavoidable and so it attempts to halt the research and often dismisses the study as quack science.
De Grey is not alone in his thinking other researchers like George Church, a geneticist at Harvard Medical School, commented saying his colleagues may argue that many age-related diseases are too complex and simply can’t be treated, his thought is that such thinking is incorrect.
Cynthia Kenyon is another supporter of the anti-aging, she is vice president of the ageing research center found at Calico Labs.
This Google-backed company had a massive breakthrough in anti-ageing research, when they demonstrated that by changing a single letter of genetic code they could make roundworms live six weeks instead of the normal three.
Another treatment which is gaining a following but sounds like something straight out of a horror movie is what has become known as   “vampire therapy”.
This therapy takes the blood of younger donors and transfuses into older patients. This treatment has seen older people with diseases such as Alzheimer’s regain the ability to feed wash and dress themselves.
Ray Kurzweil another supporter of anti-aging research, says the future is “mind uploading” giving us a way to achieve digital immortality.
We looked at this idea of transhumanism in the video about “the mind body connection” linked above.

Many might think that the claims made by these researchers are outlandish, and seem based in science fiction. But regardless of how it is achieved, the extending of lifespans will occur first by decades and then by hundreds of years, this will present societies with many difficult social questions.
We will have consider if the time put into this research is ethical, after all its time that these experts could be using to cure some childhood disease?
The cost and the economic divide, will these treatments only be available to the rich?
What economic implications will there be from people living forever?
All of these things will need to be answered as move ahead into a world without ageing.
Would you like to live forever?
Do you think a finite lifespan gives life a purpose?
What other problems do you see stemming from immortality?
Let me know in the comments below.