The baku, a creature that also goes by the name ‘dream eater’, is a mythological being or spirit found in in Chinese and Japanese folklore. This beast is said to devour nightmares. One should be careful when dealing with this entity and the baku should not be summoned without caution. As ancient legends tell that if you summon the baku and it is not satisfied after feasting on your nightmares, it will turn and feast upon your hopes and dreams. Let’s take a look at the legend and a surprising theory that could lead us to a real creature. 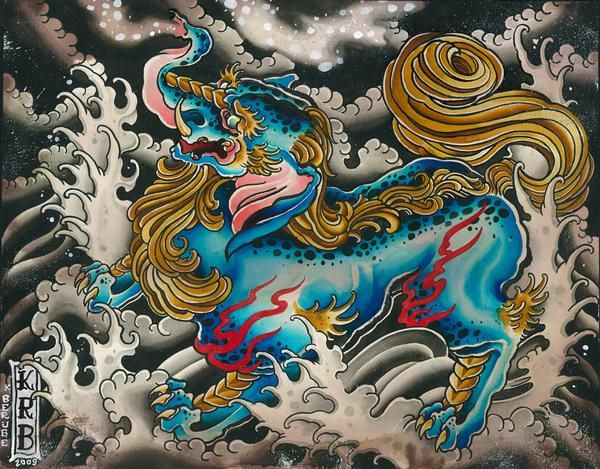 According to these ancient Shinto beliefs, all of the bad thoughts that humans tend to have, create diseases, accidents, and foster the growth of evil urges, but there is a clause as these dreams are said to stem from evil spirits; included in this list of bad experience are nightmares.
It was once a common belief in Japan that if a nightmare was not dealt with quickly, it would grow in strength and develop into something very real and very bad.
The baku the mythological beast of this video was attracted to these dreams and would manifest to eat said nightmare. This beast comprised of a variety of mixed body parts from a selection of other animals, having a bear’s body, an elephant’s nose, tiger’s feet, an oxen tail, and the eyes of a rhinoceros.
Images of the Baku are wildly stylized, but the Baku does resemble a real creature the Asian tapir.
In fact, in Japanese they have the same kanji (獏).
The baku is not the only animal that has this double naming; the word kirin is Japanese for giraffe and also the name of another mythical Chinese monster.
Could this show that real animals gave their names to these creature due to similarities?
Studying Illustrations of the baku from ancient Japanese artifacts it is now believed that the Baku was or is based on a Chinese monster called the “Mo,” descriptions of the Mo reached Japan during the 14th Century.
The tales of this Chinese beast, a picture of a MO could ward off evil spirits, seems to have been merged with 7th and 8th Century legends related to another mysterious  creature named the 'Hakki' this beast  was also said to be an eater of nightmares.
Legend describes the process of summon this monster, a person who wakes from a bad dream can call on the baku.  For example a child having a nightmare in Japan will wake and then repeat three times
“Baku-san, come eat my dream”
the baku will proceed to enter the child’s room and consume  the bad dream, this  allowing the child to peacefully go back to sleep.
There is a warning, as to call the baku for help is something that must be done sparingly, this because if the beast is still hungry after eating a nightmare, he may turn his attention to the childs hopes and desires eating them to satisfy its hunger.
The consumption of these hopes and dreams would leave the child to live an empty life.
Often the baku would be summoned to protect from bad dreams before a person took their nights rest. To this day, it remains common practice for Japanese children to keep a talisman of baku beside their bed.
During the Muromachi period (1337 to 1573) in Japan, it became popular for people who were facing death to hold an image of a baku this talisman protecting the dying person from evil spirits which gather as someone dies.
During the Edo period (1603 to 1868), this belief lead to pillows being sold which were in the shape of baku, and it was said would protect the sleeper from bad dreams.
While many “yokai” spirit creatures and other legendary beasts have faded away in the common beliefs found and still practiced in Japan, baku are still a popular figure and the traditions associated with the monster persist.
The baku appears in many modern animation and comic books, although now its appearance is more like an authentic tapir, and less like the creature of folklore.
The association with tapir may also point at an element of truth to the story, and that is the creatures origins.
it has been proposed the creature once lived.
A grain of truth hidden in a buddle of mythology.
In the book “Ancient Chinese Gods and Beasts,” Kyoto University professor Hayashi Minao points to historical bronze ware and other ancient artifacts inscribed with images of the mythical baku.
He has postulated that some creature like the Asian tapir might have existed in China at some time, but has since gone extinct.
The baku resemble this extinct Asian tapir. And as was stated at the start in Japanese they share the same name and kanji (獏).
Could this mean that this story rather than being a paranormal tale is more likely cryptozoological one?
Or is this all just an ancient Asian myth?
What do you think?
Let me know in the comments below