In the ongoing search to explain sightings of unexplained aerial phenomena researches constantly hunt for a smoking gun a photo or a document which would once and for all blow the lid off of the can secrets kept by the governments of world.

The clandestine agencies working their hardest to hide technology alien contact and other amazing things from the population.

Often these groups are thought as being elite security agencies highly trained with the inside track on what is going on behind the curtain of reality presented to us by the mainstream media.

This being said once in a while these groups release information on their activities and sometimes in can be eye opening.

Not just in the things they keep secret but also in how sometimes they are as clueless as the rest of us.

One of these document dumps has recently taken place do these papers finally show us if UFOs are fact or Fiction? 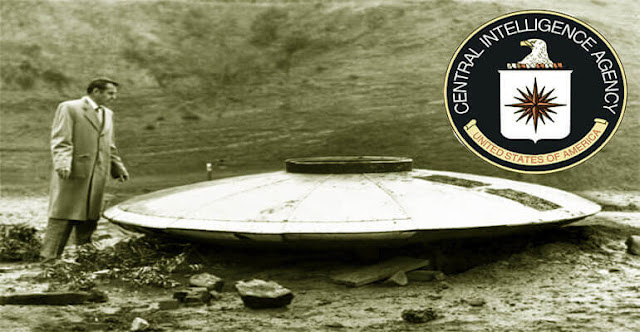 An assortment of documentation from the US security agency the CIA has been released this info dates from the Forties and runs through the first half of the nineteen Nineties.
The bulk of these document cover strange events that the agency pursued out of their own interest or from following orders given by those above. The inquires looked at many odd and strange sightings of everything from ghost and UFOs to mystery animals and suspicious technologies
This compilation of reports is available to anyone who wants to read them, maybe to see if there is any truth to the strange stories and cover ups that have become legendary in the fields of paranormal and extraterrestrial research. Do they uncover the truth and provide the smoking gun (I mentioned in the intro) that many are looking for?
The reports run from1947 to 1990 and can be found on the CIA website linked above. (https://www.cia.gov/library/center-for-the-study-of-intelligence/index.html).
As well as popping up through this video!
This long list of secrets records much more than UFO sightings it also gives us  a peak into some programs that have long been secret and subject to many conspiracy theories. These include the Stargate program something which has been subject to the mentioned speculation
This dossier of secrets contains over 800,000 files which have been hidden from public view for decades only coming to light today thanks to the efforts and appeals using the freedom of information act by dedicated researchers forcing the CIAs hand.

For most of the documents history there were only accessible at the CIA National Archives located in Maryland.
This treasure trove of several hundred thousand pages of intelligence analysis and science research and development show that the Stargate Project, dealt with psychic powers and extrasensory perception.
They tell of how the spy organization recruited famous people that claimed they had these abilities one of the superstars of the program is man I have talked about before Uri Gellar.
Memos detail how Mr. Geller joined the agency and the program back in 1973 and from day one was able to partly replicate pictures drawn in another room with varying accuracy, this leading the researchers to write that he "demonstrated his paranormal perceptual ability in a convincing and unambiguous manner".
This glowing report on Gellar gives a sneak peak as to how the CIA was perceiving the world at that time. An age when paranoia was at it highest at the peak of the cold war. There are also reports on the possible Soviet use of parapsychology, details of telepathic "remote viewing," with disconcerting sketches of a metal structure, and a creepy advertisement for the Buffalo Bill Wax Museum in Colorado.
This enabling a period of history when all possibilities were open to be studied no matter how alternative in an attempt to gain the smallest of advantages over the USSR. This openness, it would seem, has been lost since the end of the cold war, which I think is a real shame.
So what secrets can we learn from the documents?
Well maybe you would find the recipe for German Disappearing Ink useful?
One of the sections contained in the database is focused on “Secret Writing methods and techniques." "Secret" referring to the invisible ink that was and can be used, the strategies for creating handwritten secret notes, and even how to utilize invisible photography. It might not be the most high technology, but its useful stuff for those that want to avoid digital spying.
Next probably the subject that the majority of us would look up first, UFO Photos and Analysis of extraterrestrial visitors to our planet.
One report documents a UFO spotted by two police officers patrolling the Lithuanian border on June 26, 1996.
Contained in the pages is a description of the incident which reads as follows
“Vehicle loads of soldiers from the ARAS rapid reaction force, sniffer dogs and police reinforcements immediately arrived on the scene of the emergency,”
“They noticed a spherical objecting hanging and “pulsing”.
“At the same time, they heard what they described as “a strange sound like an electric or electronic crackle.
“When they moved about 50 meters through the long grass, the police said the sphere moved away, rose higher and rapidly departed.”

Another strange thing about this sighting was the reports of a persistent sound that was recorded and defied explanation. Lithuanian scientists finding it impossible to hunt down an explanation for the incident.

Declassified in 2007 the next report looks at an odd occurrence which took place in the middle of the cold war, the Berlin tunnel, this CIA report denotes a joint operation between the CIA and British Secret Intelligence Service (SIS).
This was a plan between the two countries to tunnel into Soviet-occupied Berlin and then tap phone lines which would carry secrets from the Soviet Army headquarters.
The plan was unsuccessful as the idea was leaked to the Russians but the Russians were no fools they decided to let the plan go ahead until they revealed its existence in 1956. This event was highly embarrassing for the two agencies

Who was the man that caused the plan to fail?
These documents tell us a double agent, known as George Blake, was responsible.
I guess they would have hunted this man down and detained him hoping to get some dirt on the Russians to counter their failure and while on the subject of detention there is a section of the files that also reveal a lot about the CIAs methods when it comes to those they have captured.

"Documents Related to the Former Detention and Interrogation Program," which contained information right up to the early 2000s.
An email, that gives us an idea of what was going on then and possibly now the sender says, "This morning I informed the front office of CTC that I will no longer be associated in any way with the interrogation program due to serious reservation[s] I have about the current state of affairs. Instead, I will be retiring shortly. This is a train wreak [sic] waiting to happen and I intend to get the hell off the train before it happens."
These pages give us a just a snippet of what goes on behind the curtain of national and international security.
One things is for sure there is always something going on that we are kept in the dark about.
Do you think we should be allowed to see that they have hidden?
Do you think they are really hiding proof of UFOs and other mysteries?
Let me know your thoughts in the comments below.