Many of you guys that watch the channel are believers in advanced alien races visiting the planet or that they may have even founded our civilization.
We tend to look for big pieces of evidence a crashed craft a recovered body or objects left behind after a visit.
Sometimes the smallest clues reveal the biggest pictures could this be a case with language.
There are thousands of different; languages spoken on this planet but if you look at linguistics you will see a pattern of evolution shared characteristics and protolanguages all different to what we speak today.
English is actually a good example due to its absorption of words and phrases from many different languages over the years of its evolvement.
Could the study of an alien language offer us clues to some of our biggest questions regarding extraterrestrials? 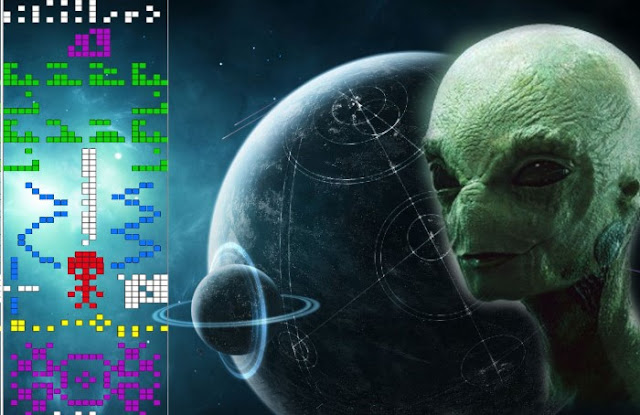 When we see aliens portrayed on the big screen they often talk in garbled series of squeaks squawks or click subtitles are thrown up and that’s enough for most to be satisfied.
Some delve a little deeper shows like star trek create a new language that true fans can learn if they so wish
Hab SoSlI’ Quch
Give YouTube. A search for the Klingon Teacher if you want to know what that means
These shows often do away with the idea that a planet would have more than one language using the old excuse of a civilization evolving to the point when language becomes singular and unified.
Throw in devices like universal translators and that’s the language problem dealt with.
In real life things would not be so straight forward we may get lucky and find Intelligent Aliens Might have taken the time to study and learn Speak Our Language. We have been pumping radio signals out into space for a good number of years.
But we should consider that we need to adjust how we communicate and show our intentions, we wouldn’t want to inadvertently   cause a galactic war from saying the wrong thing.
This is when professional linguists, mathematicians and scientists step in.
METI (Messaging Extraterrestrial Intelligence) operates a program that looks into this very problem and for those of us with an interest in ET it can provide some insight and new avenues of thought for us to explore.

Sheri Wells-Jensen a serving board member of METI said "We have to have all hands on deck, we’re going to need everybody, and we're going to need to generate multiple sets of meanings for a message that we get."
Wells-Jensen carried out an experiment which showed why we may need the power of the human hive-mind.
She presented college students with several puzzles that had been coded in the manner of Lincos, a constructed language designed to be understood by intelligent extraterrestrials. The students figured out the simple stuff, such as basic mathematical functions, well.
Things didn’t however go so well when it came to more complicated concepts go.
Using PI as a question the students struggled to find the answer, they came out with ever more crazy answers.
Commenting Jensen told of how when she said
“‘OK, what is this real word?' they made poetic jumps and said, 'world'; some of them made an opposite poetic jump and said, 'infinity.' Some of them thought that she meant that the diameter of the circle ended at a wall, and said 'prison.'"
This highlights just how quick and easy it is for things to awry.
Communication taking place between the same species and speakers of the same language!!
It will certainly be much tougher to decode something which was put together by creatures from a solar system that do no share any cultural or evolutionary history with humanity.
It is also entirely possible that they may even rely upon different senses to perceive their environment and to communicate, if we use technology to communicate maybe over great distances.
There is also the problems with systems being incompatible “Geoff Goldblum’s magic flash drive aside” Aliens could be using far more advanced technologically than we are.
We have enough problems here on our planet with android and apple.
We will need to come together and use all of our collective wisdom maybe in the form of a citizen-science project, we will need to increase our critical-thinking skills and our understanding of nature and agree upon a form of language and in a case of life reflecting art, we may have to agree upon a universal language for the planet.

"One of the goals of METI is to work on this science-literacy problem.
Jensen is working hard on this task and presented a language she christened "Language in the Cosmos," at the International Space Development Conference (ISDC) 2018 held in Los Angeles.

The workshop was organized by METI, explored the possibility that language — or at least certain essential elements of language — might be universal throughout the cosmos.

Noam "Chomsky the Famed linguist has often made the comment that if a Martians visited Earth, they would think that we all speak dialects of the same language, this because all terrestrial languages share a common underlying structure," METI President Doug Vakoch, also presented a paper at the same workshop, he said " if aliens have language, would it be similar to ours? That's the big question."
The end result was one of both sides thinking they are right, Jensen being skeptical, citing our lack of knowledge about the origins of human language Chomsky, expressed optimism.

Do you think this is an area of ufology that we should spend more time developing?
Is it something that we shouldn’t worry about, can we rely on the advanced abilities of extraterrestrials to find a way to get the message across?
Or could this be a disaster waiting to happen?
Let me know your thoughts in the comments below