Who is Bob Lazar?


Bob lazar has a new movie coming out very soon as someone invested in the field of ufology I am excited to hear what he has to say.

I have believed his story since first hearing about I the secret base and its operations in the early 90s.

I would say he is a survivor

We have looked at how governments and their agencies often find it easy to disappear these leaks.

In a couple of other videos.

Bob is very lucky he never met with unfortunate accident or decided to take his own life.

(suicided) as they say.

So let’s dig into what the man went through to tell his story of element 115 and the back engineering of UFOS.

Most have heard the name Bob Lazar, the man is best known as the whistleblower that outed Area 51 and its program of reversed extraterrestrial technologies.
Lazar claimed to have been a worker at the base being part of the group entrusted with back designing UFO craft.
These days he is making documentary films and is currently employed as a science and innovation advisor to companies like Raytheon, a company which ironically has contracts with the military. 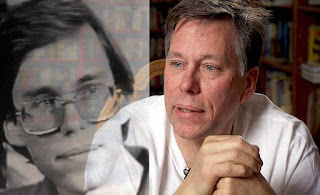 The people who tried to bury Lazar and his story.

so for those that unfamiliar with Lazar let’s have a quick catch up so if you watch the new film "Extraordinary Beliefs" you will have some idea what the man has been through for the past 30 years.

In 1989, K.L.A.S journalist George Knapp aired his interview that would change UFO study for the next three decades.
This is the point at which the world was introduced to Robert 'Bob" Scott Lazar live for all to see on the Las Vegas TV channel.
Lazar gave a riveting interview telling how he had worked at a mysterious underground lab called S4, 8 miles south of the now infamous Groom lake military base Area 51.

On live television, he told America that there was a collection of disc-shaped craft kept at the base which all looked damaged in some way.

He said that he was told they were extraterrestrial in origin, and he noticed that they were of a design that would be suitable for pilots that were small and humanoid in shape. 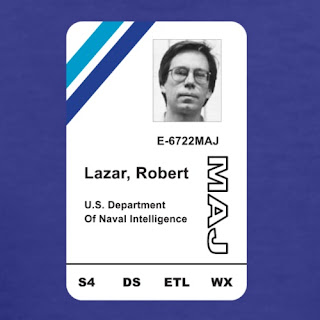 After seeing such things Bob could not keep silent even after he had signed documentation swearing to never divulge what he saw at the facility.

He began telling friends about his work at the base, and even disclosed to them where and when they could see experimental test flights of projects he had been working on.
He and his companions were then caught at one of these UFO viewing sessions and his employment was terminated.

He is lucky that it was only the job he lost, there are many conspiracies out there when whistleblowers end up dead!

So the story goes on. The Air Force denied that Bob had worked with or for them and began to discredit the man.
This is where things get strange and fall in favor of Bob's story.

Upon investigation, Knapp found that another top-secret facility, Los Alamos National Laboratories (LANL) in New Mexico, had Lazar listed in their phone book. Lazar said he had worked there, but LANL denied that claim 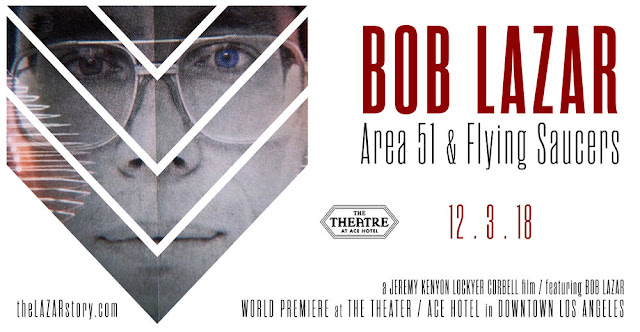 Was there a clandestine effort being made to remove this man’s creditability and make him look like a liar, publicly assassinate his character so people would dismiss his story as the rantings of a UFO crackpot?
It would seem so.

Despite this for a large part of the 1990s Lazar's case was global news, many latched onto the story and how it built a case for Extraterrestrial visitation and the procuring of their technology by the United States government.

This has led to Area 51 gaining a cult-like status in popular culture in regards to ufos and aliens, this could and would have cost the government or the shady groups behind the government billions of dollars as now the base would be under too much attention to carry out secretive testing.

Later we would learn of projects like OX cart originating from the base, proving that this was home to advance aeronautical research programs.

Lazar said he was employed as a contractor at the Los Alamos facility throughout the 80s, and still did consulting work on occasion.
Using the knowledge he gained from MIT in 1973 with a degree in semi-conductor physics he was helping with the back engineering of the propulsion system of these flying discs.
This is when Lazar introduced the world to element 115 at the time something that didn’t exist on the periodic table but now does.
Proving these claims became difficult for Bob but he was able to show IDs showing he worked at other facilities doing high tech work, such as China Lake, Kirtland Air Force Base, Los Alamos, Sandia, and the Manzano weapons storage facility.
Others came forward and backed up Bobs claims saying they had worked at the base and that they had seen him going about his work.
The air force continued to deny that Lazar had worked for or with them in any capacity.
Engineering Physicist, Dr. Robert Krangle stepped forward saying he had attended security meetings with Lazar. He explained that in these meetings “they were given the usual briefing asking not to talk about that were doing or seeing.”
When quizzed about Lazar role on the base and what specifically Lazar was working on, he said he didn’t know what he was up to any more than bob knew what he was working on.”
Compartmentalization working to help keep the projects secret.
DR. Krangle also spoke on how he understood why Lazar’s employers were so upset with him.
“I understand how Los Alamos would blackball him. He committed professional suicide.”
“He broke from the fold and talked about it. Within that security community. It is that mentality: ‘Don’t talk about what you do.'”
I wonder if the silence is kept out of fear or out of respect.
It would seem that Bob Lazar made the smart move by being so public, if something were to have happened to him it would have more people looking at his work and the bases and government secrets.
For years detractors of Lazar’s claims said that it was all fiction but over the past thirty years information has slowly leaked and each a new nugget surfaces it supports Bob Lazars story and that of DR. Krangle.
The question remains, if Lazar really did work at Los Alamos, which is now looking like a certainty.
Why are they hiding that information?
The bizarre mystery of Area 51, S-4, and extraterrestrial technology continues.
Could this new movie finally give us the information we need?
Will this prove once and for all Bob Lazars story and that the government knows about and has actively been researching an alien presence on our planet?
I guess we will have to watch and see.
Are you looking forward to this new film?
Do you believe Bobs story?
Let me know I the comments below.