We have all seen and played with them, their uses can be more serious, being used to hide a person face and even transform personalities and call upon the powers of the supernatural.

From the wild and crazy antics of Jim Carrey and the comic book inspired movie “the mask” to the 80’s action cartoon and toy line of the same name.

Well maybe we should!!

Before you decide to plant your face into one of these disguises maybe you should give this video a watch to the end and make sure you know what could happen.

Let’s take a look at some spooky masks.


I started with the movie the Mask in which Jim Carrey famously wears a green mask that gifts him superpowers. The mask was said to have been created by Loki the Norse god of mischief. If you think this is something that can only occur in movies and fantasy, you’re wrong.
In the following stories of masks you will see that it doesn’t need to be something that once belonged to a god, to have powers that can terrify.
The story begins at New York’s Steinway Mansion when auctioneers were clearing out the house for an estate sale, this is when they uncovered a voodoo and doll creepy masks.
This old mansion had once belonged the Steinway family whose name is still famously linked to pianos.
They left the property in the 1920s leaving a vast assortment of items behind.
it was these and in addition the belongings of the last owner a Michael Halberian, that the auctioneers had to sift through in search of items which that could be easily auctioned.
This is when they stumbled across a spooky artifact, a box containing voodoo masks and a doll which was surrounded by rusty nails and lay in a small coffin.
The box was found hidden in the vast cobweb filled attic of the Steinway Mansion.
Michael Capo was the man charged with the job and responsibility of selling the mansion's contents, these included many old items and antiques as Mr Halberian had lived there for an astounding 82 years.
Describing the box Mr Capo said that it was something that most likely dated form the late 19th century, when opened it revealed five voodoo masks.. 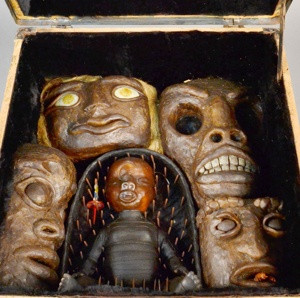 The mask were made from some odd materials that included wax and pig skin, some say it may well have been human skin.
Handling the objects the auctioneer said he could feel an energy being emitted from the masks and that it felt bad even evil.
Inspecting the items those that were in the room fell silent as a cloud of dark feeling descended upon the group.
The masks were obviously things that had been used in some kind of ritual or ceremony there was a mirror inside hem lid of the box which the wearer of the mask could see themselves in.
The box also contained a strange voodoo doll.
The history of these artifacts was researched with living members of the Halberian’s and they insisted that these objects were things that their late relative would absolutely not own.
So we can assume that these things must have been the possessions of the Steinway family and can dated to at least pre 1920.

The location of it discovery could provide a clue, hidden away in an area where the owner wouldn't necessarily go, so perhaps a member of the domestic staff kept it there.'
These staff were of African and Haitian descent the birth place of voodoo.

This mammoth 27-room house, was crammed packed full of objects like telescopes, barometers and old maps.
Built by Benjamin T. Pike Jr in 1858.
Then being sold in 1873, by Mr Pike's widow to the Steinway family, who had begun moving their piano-making facilities to Astoria from Manhattan.
Tailor Jack Halberian purchased the mansion in an auction during the 1920s after the Steinways moved out.
No one is sure if the voodoo masks will go to auction like the house but they are sure the objects hide a dark past.
The voodoo religion originates in the Caribbean country of Haiti, and is based upon a merging of the beliefs and practices of West African peoples and Roman Catholicism.
This system of beliefs was put together by African slaves brought to Haiti in the 16th century.
This religion had given rise to many a spooky story the aforementioned masks and voodoo dolls to zombies and demonic possession all claimed to be curses that voodoo can inflict upon a person.
This brings us to another case of voodoo masks and strange paranormal happenings.
A mask was donated to a museum after those that owned had a series of scary experiences which they linked to the mask.
This mask causing intense nightmares for the majority of people who choose to touch it.
The start of the story is a letter.
This e-mail sent to paranormal investigators after an appearance on the famous coast to coast radio show.
The e mail reads as follows:
Greg and Dana,
Caught your Coast to Coast show on Sunday and heard you talking about the museum of the paranormal. I have a statue that I think you would be interesting in. I was going to send it to you but when I saw how local you were I hoped you might meet me half way instead. It would save me shipping on a heavy item.
I found the statue in the crawl space of our home several months ago and my family and I have reason to believe its is haunted.
I’m ready to put it in the trash but would rather give it to someone who will keep others from using it.
If you would like to know more please email me.
Tim
A meeting place was agreed and the paranormal team met with the finder of the strange object. Wrapped in a heavy burlap sack the object was handed over with an ominous warning
“Well, he’s your problem now.”
The investigator asked what he had just taken possession of and what lay in store for him in the days months or years ahead.
The man began to the story of purchasing a house on the outskirts Dayton, Ohio. He his son and wife were very happy and settling in nicely, while the man got the house in order he had to run new cables through the house and into the basement.
As the man shimmied his way into a crawlspace he discovered the burlap sack bound tightly with twine.
The sack was covered in dust and cobwebs obviously it had been there some time curiosity got the better of the man and he pulled the sack free of the crawl space.
Opening the sack revealed a two-foot statue of a man with elongated features, jet-black aside from ivory eyes and a strange triangular symbol carved into its forehead.
The object seemed odd to them but it was nothing to fear and was placed in a corner of the room.
That night the terror began, the man awoke to the nightmare fueled screams of his young son, rushing to the boy’s aid he found him shivering in fear.
The boy said that the figure had come to life and was trying to pull him from his bed.
the nightmares of the “little man “continued, then he and his wife began to experience terrible dreams themselves.
These terrible nightmares were so bad, that the man refused to talk about them.
This is when the man put two and two together the object was linked to the bad dreams and this is why it was hidden.
After they rewrapped and hi the statue the family’s nightmares subsided, but other strange activity began to ramp up in their home.
Such odd occurrences as Electronics and lights flickering on and off, strange shadows darting through the living room, and more than once, the family would return from work to find their faucets running full blast. 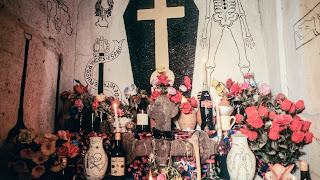 Taking the object the investigator expressed his concern for the man’s family and asked one more time about the nightmares.
The man caved and began to tell of the horrible dreams he and his family had been having.

The man said: I had a dream that I held her down, put a sharp rock to her chest, and cut her open. I heard her ribs crack, felt the warmth of her blood..
I can remember the way she screamed..
Everything, it was all so vivid. Then I dug out her heart with my bare hands and ate it. It wasn’t a regular dream. It was terrible.”
I don’t know about you guys but that sure would do it for me.
The investigators took the object and made their way back home not really sure if the stories were true, that was until they peaked into the bag.
As soon as they laid eyes on the object the vehicle in which they were traveling began developing engine problems coughing and spluttering, radio cutting in and out.
Later inspection of the vehicle found no problems the mechanic even mentioned how a good of a shape the truck was in.
They began to investigate the idol and with help from a friend discovered that they had willingly took possession of Bloody Mary.
Her first words were, “you didn’t unwrap it, did you?”
The idol carried some serious bad energy and a series of rituals would be needed to placate the disturbed spirit which lived with the blackened wood.
This African effigy is in many cases, buried as part of a ritual intended to curse someone.
Once the curse is cast, the idol is wrapped in burlap and buried somewhere it can’t be disturbed. This was a particularly important detail in the ritual, as any further meddling with the object would result in the curse being visited upon the individual who cast it.
It would seem that by finding this object the man.. unwittingly woke the voodoo spirit who showed its displeasure through nightmares and the other strange events reported.
The object is to this day kept with the paranormal investigator and anytime it is unwrapped or handled those that look or touch it have terrifying nightmares
These nightmare gave way to hallucinations the idol appearing at random times accompanied by a sense of terror.
These continue to this day.
This brings us back to the voodoo masks we started with, could they and the doll with which they were found have a curse of some type?
Could removing them, or even selling them curse an unsuspecting collector with nightmares and paranormal activity?
I guess we will only know if or when they are sold.
Do you have any thoughts on the origins of The Idol, the masks or the voodoo doll?
Have you had any spooky run-ins with any of your own haunted objects?
Let me know in the comments below