It’s a mystery which has fascinated the world for years just who was Jack the Ripper?


Now, 130 years later, a postcard sent to police days before he slaughtered his final victim was sold at auction a valuable piece of evidence which will disappear into a private collection.


Could this postcard have answers?


The identity of Jack the Ripper has never been resolved and in this note he warns the police that he has two more women in his sights, and taunts them that his “knife is still in good order”.


Handwriting expert Elaine Quigley thinks that she can finally nail the notorious killer.


Let’s take a look at all the other suspects in the frame for these horrific murders. 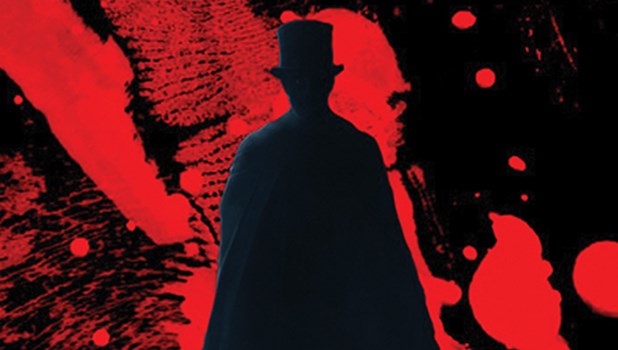 Experts have given us a theory as


to who the infamous killer could have been.


So lets go back to WHITECHAPEL, east London, the year is 1888 and FIVE prostitutes have been brutally slain over a 12 week period –the time that marks the  birth of legend.


Chapman’s uterus was taken, Eddowes had her uterus and a kidney removed and her face savagely mutilated.  Kelly’s body was completely decimated, her face hacked away leaving an unrecognizable bloody mess.


The legend of Jack the Ripper is born and spreads worldwide.


The killer earning his famous moniker from the signature found written on the letters sent to police.


At the time the


People of Victorian England were so terrified of the Ripper, streets emptied as darkness fell.


While other later murders were also linked to him, it is thought these five are the only killings actually committed by the mysterious Ripper.

Other crimes that were attributed to him are thought to be the work of journalists who faked letters to the police whipping up the idea of the serial killer to boost newspaper sales.

A string of suspects has been speculated since the time of the killings but as no-one was ever caught, we can make a guess.

First suspect is a man called


Francis Tumblety may have had a good motive after finding his wife engaged in sexual acts with a prostitute.


Our Expert Elaine is convinced that not all of the 1888 Whitechapel murders were committed by the same person, the man we know as the Ripper was actually  Francis Tumblety.


She says: “He was the youngest of 11 children in an Irish-American family and had an unsettled personality.


“He married a woman older than himself and was let down when he found that his wife was a prostitute.


“It was the last straw, he couldn’t trust anyone and someone had to pay. Thus the string of women he murdered were the losers.


“But he wasn’t the killer of all the women who were killed in Whitechapel in 1888 and the police knew that.”


Tumblety was arrested for gross indecency but after learning cops were interested in him for the Ripper murders, he fled the country and later died of heart disease in America.


The next possible suspect is a Thomas Cutbush. This man was a violent criminal


Cutbush a medical student suffered from delusions thought to be caused by syphillis.


After stabbing one woman and attempting to stab another, he was pronounced insane and sent to the infamous Broadmoor prison, home to many of England’s worst criminals, he died there in 1903.


Next we have james Kelly an escaped prisoner with a police file that perfectly matches the Ripper profile.


Kelly killed his wife in 1883, stabbing her in the neck and was sent to Broadmoor.


He managed to escape five years later using a key he made whilst locked behind bars.


After the last of the five murders, cops suspecting the man searched for Kelly but they could not find him.


Then 40 years on, he strangely turned himself in to police and returned to Broadmoor where he died two years later.


A Cold case detective called Ed Norris claims that he was responsible for murders in America and looking at his police file he perfectly matches the Ripper profile.


Yet another man suspected is James Maybrick[dw1]


Liverpool born Maybrick may have had a good motive.


And luckily a chance find could tell us more.


In 1993, a diary was found under a house’s floorboards in Liverpool.


In it, cotton merchant and arsenic addict Maybrick confessed that the ripper was him and confessed to another killing, a prostitute again but this victim being in Manchester.


Critics said it was a hoax, but researchers found evidence the diary is the real deal.


In 1889, his wife Florence was released after being convicted of murdering Maybrick by arsenic poisoning.


Both had cheated on one another with sex workers, this sparking Maybrick’s Ripper motive.


But findings are still inconclusive.


Now for a suspect that doesn’t originate in the slums of old England.


De Jong was a Dutch serial killer and sailor


He is a relatively new suspect.


De Jong murdered his two wives in his homeland of Holland, and went onto bludgeon two more women to death.


He also travelled to London regularly on ships.


Could his transience be the means by which he avoided justice?


Another man suspected and again suffering from a debilitating disease is JACOB LEVY.


Levy contracted syphillis from a prostitute, which could have prompted his thirst for revenge.


He was also a butcher, this giving him the skills to remove the victims’ organs.


He lived in the heart of Ripper territory and would have easily been able to get away and hide his crimes.


After all its not strange to see a butcher covered in blood.

Finally we have Frederick deeming.


Deeming immigrated to Australia after murdering his wife.


Killing your spouse seemed to be a common thing back in the day!


He murdered his first wife and four children in St Helens, Lancs, in 1891 and later that year emigrated to Australia with his second wife, who he also killed.


After being jailed for the crimes, Deeming, boasted of being Jack the Ripper.


Police believed that he had been abroad at the time of the murders, but experts have since queried this.


Could he be the killer and that slipped the grasp of the police so closely?


One clue we have is a confirmed postcard sent to police by the ripper.


HANDWRITING expert Elaine Quigley who is head of the British Institute Of Graphologists and a Jack the Ripper expert.


Compared the latest postcard to the infamous From Hell letter penned by the Ripper.


This letter gained notoriety for its insane content which also included a fragment of a victim’s kidney.


she believes the two pieces of writing demonstrate different aspects to his personality, with the postcard proving that he was capable of being deceptively rational and collected as well as murderously violent.


She says: “These two writing samples are the two sides of his personality.


“The Letter From Hell has a stress about it and the anger is very evident.


“The narrowness of the letters and the length and height of the vertical strokes in the script show all the pressures and anger that was felt.


“But the postcard is not written in the same frame of mind.


“The letter was a much more emotional experience.


“The postcard has a tidy flow, for that reason it is much more businesslike.


“The postcard is much more thought through while the letter is releasing his anger.


“He had a very complex existence, with the ability to act in a collected way that could be very deceptive and this is reflected in the postcard.”


Going on to add: “You can see by the layout of the writing that he isn’t someone who plans things, but reacts to impulses and anger.


the Ripper is fascinating and we can paw over the few pieces of evidence that remain and speculate to his motives and his identity but too much time has passed for us to ever conclusively know who the killer was.


The mystery adding to his infamy


Who do you think the Ripper was?


Do you think we will ever learn the killer’s true name?


Let me know in the comments below?