Over the 100 plus years since man first took to the skies there has been an ever increasing number of strange occurrences and mysteries. some of these mysteries have GROWN TO  become legend, FAMOUS TALES like the story of Amelia Earhart and her disappearance, the many planes that have vanished over the infamous Bermuda triangle and of course the sightings and interactions with UFP’s.
There is one story that stands out from the rest, the tale of an airplane which disappeared into the clouds vanishing for years and then shockingly reappearing half way across the globe decades later. 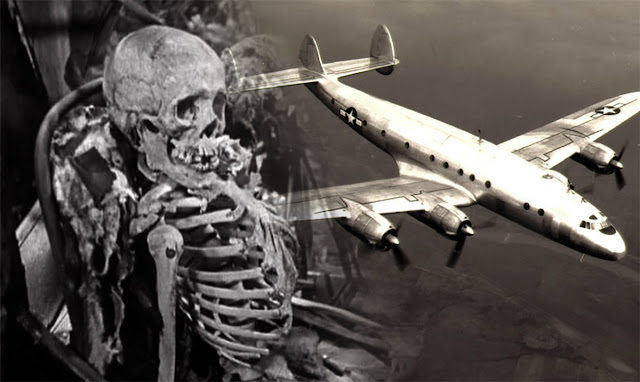 Irwin Fisher wrote an article back in 1989 in which he outlined the story of flight 513.
The airplane in question was a Lockheed super constellation, flying out of Aachen Germany carrying 4 crew members’ and 88 passengers. Heading to Chile ON a routine flight which had been flown many times before, this flight WOULD however not BE so routine!
Flight 513 vanished from radar on the 4th of September 1954 leaving no evidence of a crash or ANY wreckage found. A situation similar to that of the recent DISAPEARENCE OF Malaysian passenger jet which STILL AS OF yet HAS to be found.
Investigators wrote the FLIGHT 513 off hypothesizing that the plane had come down in the ocean and all chances of finding survivors or proof OF A CRASH was lost.

This is far from the end to the story, we jump forward in time to October 12th 1989 and an airport in Alegre, Brazil.
A plane was spotted by ground staff circling the airport, after several passes the aircraft adjusted its position and began the descent to landing. The plane came down and touched down safely but then oddly it just sat silent on the tarmac. The staff of the airport no doubt feeling confused continued in their efforts to garner a response from the crew of the plane, yet it remained silent. Fearing this could some be a sinister planned event or a situation that could end dangerously a security detail was quickly assembled.

This team approached the aircraft stealthily and began to find their way into the craft.

The team edged ever closer and this is when they spotted some strange things with the plane, firstly running along the planes fuselage was the logo for Santiago Airlines. This being odd as the airline had gone out of business a good number of year prior to this event. The plane did however still have its registration numbers, something all aircraft are required to show by international law. These numbers were ran through the database and this is when the airport staff got a shock.
This was the plane that had vanished thirty years previously!!
For a plane that was 30 + years old and had been supposedly lost at sea it was in amazing condition.
The team forced the door of the plane cautiously entering with no clue of the macabre situation that awaited them.
The cabin was eerily silent for an aircraft that had just made a landing and was meant to be carrying 88 passengers. The security team edged their way down the aisle, looking at the seats.
They were greeted with the sight of skeletons, every living soul on the plane passengers, and crew were dead and had been SO for a long time. The crew of the airplane were found in the positions in which they had died, the planes captain still holding onto the controls. The instrument panel dials still reading all the relevant information to the skeletal pilot, and indicating that the plane was in good running order.

The security and airport staff were obviously in shock, this bizarre event having them scratching to find an explanation.
A team was assembled in an attempt to explain what had happened to the plane and its ill-fated occupants. This is when a DR, Celso Atello enters the story. The doctor gave an interesting theory as an answer to the where and what had happened to flight 513.
He said that he thought that the plane had entered a time warp, a portal, or worm-hole that punctured time. The link between time AND distance allowing for the plane to traveling through the anomaly WITH ITS mechanical workings stILL functioning but the living organisms, ‘the passengers’ aging 30 years in an instant.
Reports of this incident, tell of how the only comments the Brazilian Government would make on the matter BY SAYING that a mystery plane had appeared and had landed safely at an airport within its borders.
Another scientific expert had this to say about the mysterious event;
“The public has a right to know everything about this plane and the government has a duty to tell them. If this plane did enter a time warp and there is evidence to prove it, the entire world should be told. Something like this could change the way we view our world and alter science as we know it. It is crime to keep information like this secret, especially from the relatives of the people who perished on Santiago Airlines Flight 513.”
The Brazilian government has kept any knowledge they have on what happened to flight 513 a secret, the story has been the subject to much speculation. There are those that claim it to be an out and out hoax.
There is however a number of other occurrences that are similar to this event.
Most Famously “the Philadelphia Experiment.” For those that haven’t heard of this strange story it involves the U.S navy and a very strange test of technology which was meant to make the USS Eldridge invisible.
The Navy were using high powered electric fields to create a bubble of sorts which they theorized would enable them to cloak the ship making it invisible.
The first test was said to be a success with the manipulation of electric fields turning the ship invisible as was planned.
On the second attempt, something went horribly wrong and the ship was allegedly sent a few minutes through time.
This had terrible repercussions for the men that were on board the ship at that time.
They were said to have become merged with the ship, the molecules of the men and the metal bound together, those observing watched the sailors die agonizing deaths.
It is said those watching from vessels like The S.S Andrew Furuseth saw the Eldridge teleported into Norfolk Virginia base from the waters of the Philadelphia shipyard.
What is odd is that these experiments and the disappearing plane happened around the same time, the plane vanishing in October of 1954 and the program that was said to encompass the Philadelphia experiment running from the mid-forties to the mid-fifties.
Could there be some connection in these events?
Could the technology still be in use today, or was it abandoned after these terrible mishaps?
Are these stories even true?
Let me know your thoughts in the comments below
Also as we quickly approach the end of 2018

Can i say a big thank you to all of you that have helped me and the channel grow so much this year?
I have a few things planned for 2019 so keep your eyes on the channel.
I would also love to know which video or videos were your favorites from the year.
If you could let me know in the comments that would be great