its cryptozoolgy time once again here on the channel, and in this video I will take a look at large flying from beast from the age of dinosaurs which may possibly still be in the skies today.
Pterodactyls were and may still be SOME OF THE largest, winged ANIMALS TO HAVE EVER LIVED. The largest being quetzacoatus, at 35 feet, its wing span was the size of an f-16 fighter jet making it one the largest flying creatures that has ever FLOWN.
These animals did however come in a wide variety, from the nemicolopterus crypticus an animal some 10 inches in size and comparable to a sparrow in size and the smallest dterradon to take to the air.
From 65 million years ago to today, and the many reports of creatures similar to these animals seen in our modern skies.
Could the pterodactyl still soar amongst the clouds today?

There have been many sightings of this prehistoric flyer from all over the globe.
Online you can find pictures of men in the old West posing with Pterodactyls that they were said to have shot, these pictures most likely showing off someone’s impressive Photoshop skills rather than a real animal.
There have been some more credible witnesses and they have for sure, seen something strange soaring in the clouds.
William Green from the UK saw something odd back in 1982.
He had been exploring Shipley Glen woods when he stumbled into an animal he couldn’t recognize, flying in a strange manner, the beast had large leathery wings.
These wings and the lack of feathers meaning this was no bird.
Sightings in the UK have been rare but there is one location where these creatures are regularly seen and are a part of the local legends and culture.
Let’s hop across to that island nations that often pops up in these cryptid stories Papua New Guinea.
Peoples native to the area talk about the “Ropen” an airborne animal that matches descriptions of the ancient dterradons. This living fossil is on the small side of the scale of size that dterradons were said to have reached. Their size is said to be around four to six feet and this could fit with evolutionary theory. Animals do decrease in size. Island reduction is a commonly found characteristic of evolution.
The Ropen have many of the same bodily features found in the fossil record of dterradons. They are said to have long beak like mouths which are filled with many long slender sharp teeth, they use these to catch their prey and are reported as formidable predators.
Another similarity is a long lizard like tail which is said to whip around as the animal flies at impressive speeds.
Another jungle habitat that is also said to be home to this cryptid are the darkest regions of the Amazon rainforest.
James Harrison was an explorer who back in 1947 was on mapping mission of the Amazon River it was on this expedition he and he his group came upon a flock of unidentifiable creatures.
He reported that a group of around five animals were flying at a low level this enabling the party to get a good look, what they saw they had a hard time of explaining.
These animals had the familiar leather like wings were brown in color with a large wingspan measuring some twelve feet. They had long flattened heads attached to a slender neck.
Could this be a larger species of Ropen?
Maybe a related species that could be larger as it is not land locked living on an island.
South America has other forms of evidence pointing toward a long and continued history of Pterodons living in the region. Carvings by local tribes have shown animals that are undoubtedly pterosaurs. These figurines and carved images are known as the ‘Ica stones’ and were and continue to be found in Peru.
These stones have been given a wide date range when discussing the time of their carving, some experts believe them to be thousands of years old, and others say that they are a more modern creation, many followers of the mainstream say that they are nothing more than fakes.
These carvings were found back in the 1960s by a farmer working near the world famous Nazca lines. These are very controversial artifacts as, besides the Dterodons we are interested in, they also show other prehistoric animals living side by side with man.
The problem is the validation of these carvings as with many subjects we discuss here, there have been fakes with locals trying to cash in on the legend by selling them to tourists.
I think there should be some real research of these objects, as it could blow the concepts we accept from the standard timeline, apart.
One thing that could also play a part is the scarcity of these creatures, sightings are rare and this can lead to the embellishment of stories. The excitement of spotting a rare beast giving rise to Local legends painting the animal as larger more fierce or even possessing magical properties.
An example of this could bring us full circle back to largest Pterodon that lived, quetzacoatus.
This species was given its name because of its similarity to an Aztec god.
The Feathered Serpent was a prominent supernatural entity or deity, found in the Mesoamerican religions.
Named Quetzalcoatl by the Aztecs, Kukulkan among the Yucatec Maya, and Q'uq'umatz and Tohil from the K'iche' Maya.
The Aztec feathered serpent god Quetzalcoatl is known from its appearance in several Aztec codices, such as the Florentine codex, as well as from the records of the Spanish conquistadors.
Quetzalcoatl was said to be the bringer of knowledge, the inventor of books, and had associations to the planet Venus. 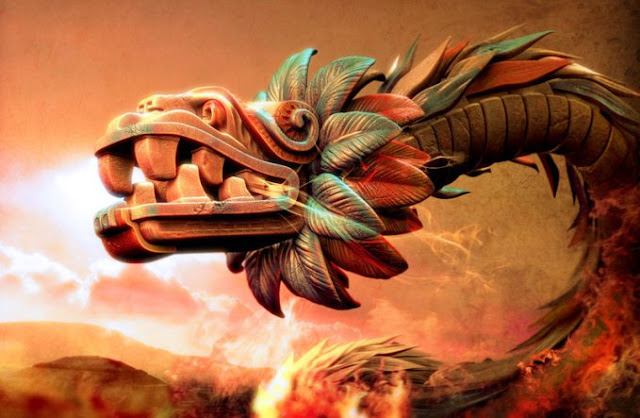 The earliest representations of feathered serpents appear in the Olmec culture (circa 1400-400 BCE).
Most surviving representations in Olmec art, such as Monument 19 at La Venta and a painting in the Juxtlahuaca cave show it as a crested rattlesnake, sometimes with feathers covering the body, and often shown to be interacting with humans.
It is believed that Olmec supernatural entities such as the feathered serpent were the forerunners of many of the later Mesoamerican deities.
Could this idea be wrong?
Could they actually be a flesh and blood creature?
Could these legends, myths and religious beliefs be based on the Pterodactyl?
Let me know your thoughts in the comments below.