The discovery of an Aztec passageway


Aztec passageway to the underworld

I Love how just when you think that you have learned all there is to know about a historical site something comings along that can blow your ideas apart and reinvigorates your interest in the history and legends which surround the mysterious sites of old.
This has ‘once again’ just happened with the discovery of a MYSTERIOUS hidden passageway found below the Pyramid of the Moon which is found in Mexico.
The tunnel was found underneath the Aztec Pyramid of the Moon at Teotihuacán.
Let’s take a look at what they found and some of the strange beliefs that the Aztecs had when it came to the underworld 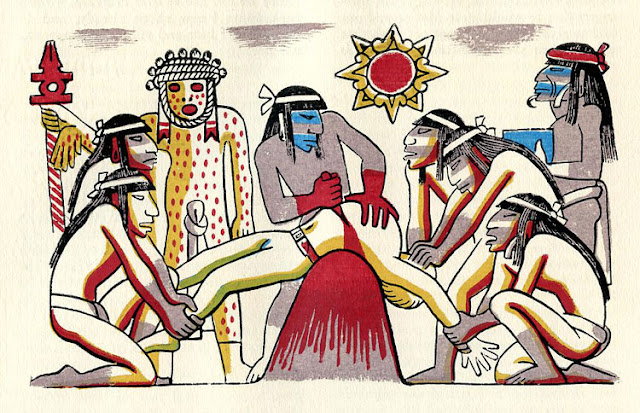 An expert team whom had been examining the structure discovered this previously unknown path way which they belief was used in rituals related to death and the underworld
The tunnel which is home to many artifacts and human remains is roughly 26ft below the ancient structure. It was found using laser scanning technology.
This path was thought to be a representation of the Aztec beliefs in the path taken to the world below, upon a warrior’s death, the national team anthropology who discovered the site said.
This team was led by Veronica Ortega, the director of the Project of Integral Conservation of Plaza de la Luna. 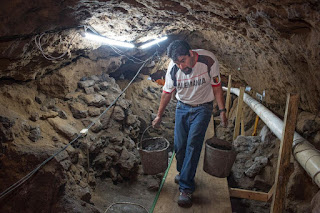 She tells of how on previous explorations they came across skeletons, these remains individuals had the cranial deformation, found in much of the Mayan area. They also came across a diverse range of green stone objects these included necklaces, and anthropomorphic figures.
In other areas an ancient mask depicting a 7th century Mayan king, was also recently discovered in southern Mexico.
Mapping the lay out of the structure the team explained how the tunnel is located to the south of the Plaza de la Luna, and that there is likely an another entrance to the east side.
The discovery of this passage way and the finds which lay within will help unravel the secrets of the ancient metropolis and in turn the other regions of Mesoamerica.
The Pyramid of the Moon is the second largest one of its kind in Mexico and is thought to pre-date 200 AD.
The Aztec city of Tenochtitlan was a gruesome place, where human sacrifices were performed to honor the gods.
A vast array of buried skulls have been found beneath the streets of modern Mexico City , these revealing the grisly details of Aztec human sacrifice.
So what did the Aztecs believe would happen to them on the day of their death?
The Aztecs were the most power native civilization in Mexico, and to the east controlled lands bordering the Maya region. Whereas the Maya were neither culturally nor politically unified as a single entity in the sixteenth century, the Aztec were an empire integrated by the state.
To the Aztec, cosmic balance and therefore life would not be possible without offering sacrificial blood to forces of life and fertility, such as the sun, rain, and the earth.
Thus in Aztec myth, the gods sacrificed themselves for the newly created sun to move on its path. The offering of children to the rain gods was considered a repayment for their bestowal of abundant water and crops.
Aside from sacrificial offerings, death itself was also a means of feeding and balancing cosmic forces. Many pre-Hispanic scenes illustrate burial as an act of the feeding the earth, with the bundled dead in the open maw of the earth monster. Just as day became night, death was a natural and necessary fate for the living.
The treatment of the body and the destiny of the soul in the afterlife depended in large part on one's social role and mode of death,
People who eventually succumbed to illness and old age went to Mictlan, the dark underworld 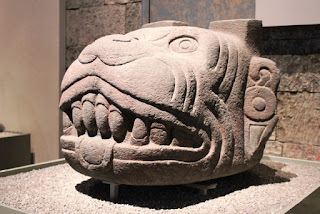 presided by the skeletal god of death, Mictlantecuhtli, and his consort Mictlancihuatl. In preparation for this journey, the corpse was dressed in paper vestments, wrapped and tied in a cloth bundle, and then cremated, along with a dog to serve as a guide through the underworld.

Mictlantecuhtli (pron. Mict-lan-te-cuht-li) or ‘Lord of the Land of the Dead’ was the Aztec god of death and worshipped across Mesoamerica. He ruled the underworld (Mictlán) with his wife Mictecacíhuatl. The god was the ruler of the 10th day Itzcuintli (Dog), the 5th Lord of the Night and the 6th (or 11th) Lord of the Day. He was the equivalent of the Maya god Yum Cimil, the Zapotec god Kedo and the Tarascan god Tihuime. Mictlantecuhtli was closely associated with owls, spiders and bats and the direction south.

The path to Mictlan traversed a landscape fraught with dangers, including fierce beasts, clashing mountains, and obsidian-bladed winds. Having passed these perils, the soul reached gloomy, soot-filled Mictlan, "the place of mystery, the place of the unfleshed, the place where there is arriving, the place with no smoke hole, and the place with no fireplace" With no exits, Mictlan was a place of no return.
After hearing these legends I don’t think I would be so keen or quick to venture down into the darkness of these subterranean passageways, it has all the makings of the start of a good horror movie.
The Aztecs were a fascinating people with complex and often contradictory beliefs, their history holds so many mysteries we only beginning to scratch the surface.
Had you heard of this discovery?
What legends and tales do you know from the lost culture?
Let me know in the comments below.