What were the Ewok creatures of Krabi?


Often the field of cryptozoology is seen a pseudo-science but once in a while a discovery comes along that seems too good to be true yet confirms that it is a valid field of research.

Past discoveries that have been linked to the field such as the coelacanth and the mountain gorilla often give the credit of discovery, to mainstream scientific disciplines.

Cryptozoology had however been looking for these animals for some time before.

These discoveries have steadily kept coming over the years most often with the finding of a single creature or remains of a small population recently extinct.

This could have just changed with a video out Thailand.

This video not only shows a strange cryptid creature it shows a whole group and they are interacting with tourist at and taking part in some bizarre ceremony. 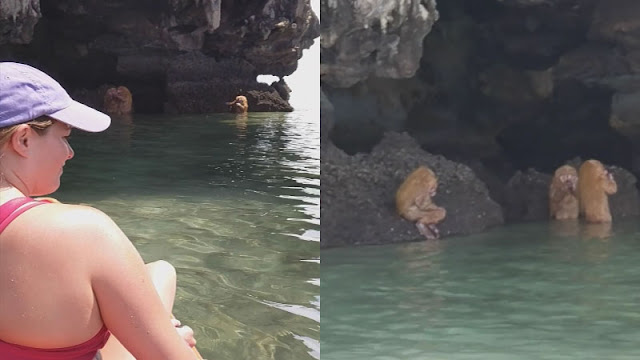 In this video let’s take a dive in the Crystal blue Thai waters and see if we can find some answers.

THIS AMAZING FOOTAGE WAS CAPTURED IN THE HOLIDAY HOTSPOT OF Krabi a holiday destination in southern Thailand famous for its vibrant nightlife and for tourist a place to see some amazing sights.
One thing they may not be expecting to see is a group of small ape-like men holding some sort of ritual in caves which open up into the seas which surround one of the picturesque islands.
A video captured by Jemayel Khawaja show that is just what a group of shocked and surprised holidaymakers found.
This amazing video was shot on the 2nd of November this year.
In the clip, we can see creatures that have been described as ‘Ewok-like troll monkeys'.
Ewoks being the furry little fighters seen in the Return of the Jedi movies.
In a very bizarre moment these ''Ewok-like troll monkeys'' are seen making strange noises whilst grouping around the entrance to a cave system.
The strange cryptids were spotted sheltering under the rocks of Railay Bay,  Krabi, Thailand, as a long boat and canoes gather to witness the strange spectacle.
A ritual was taking place with strange sounds echoing around the rocks.
What could these weird little things be?
Some say just monkeys or some kind of show if we look at local folklore is a creature that may fit the bill.
The Genderuwo. 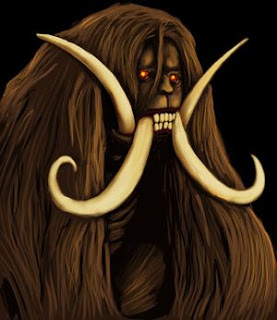 These creatures are said to be spirits which manifest themselves to look like ape-like humans, be, ng the large in size and comparable to an average sized male of the region they have a reddish black colour, their bodies covered with thick hair.
Genderuwo is found in legend familiar on the island of Java (Sundanese people call it "gandaruwo" and the Javanese called it "gendruwo").
They have been recorded in Malay and Thai beliefs due to the crossover of beliefs with these locations being so close to one another.
The strange cryptid is said to enjoy inhabiting stone structures and cave close to a source of water.
These spirits are believed to communicate and make direct contact with humans.
Stories are told that tell of the Genderuwo being able to change its physical appearance this, believe it or not, is so it can seduce men.
It's not only men who need to worry Genderuwo are said to try and seduce lonely wives who have been abandoned by their husbands or widows, but they also try to instigate sexual relations wanting a woman to become pregnant so they can have a child which would be a Genderuwo.
A spirit of someone who has passed due to suicide, accident or burial is thought to be able to return as a Genderuwo.
And like people in life these creatures are said to express a wide range personality type some good and some bad.
One thing they do have in common, however, is their ravenous sexual appetite!!
Maybe this why these creatures have been spotted in Krabi, there is a lot of adult entertainment I the town!!
Like other humanoid cryptids, there are many comparable stories Found across the globe. One, in particular, is Memegwaans.
The Native American Ojibwe have myths of a creature being slightly different from the more common Little People variations of elves fairies gnomes these small people lack a definitive form and are terrified of adult humans.
However, it seems to have a soft spot for children and will often approach in the guise of a child any young person who seems upset, injured, scared or lonely and either protect them.
. If an adult sees one, they will often cower on the ground, screaming and crying hysterically before vanishing in the blink of an eye.
The Memegwesi, are small riverbank-dwelling water spirits. They are generally benign but have been known to blow canoes astray or steal things when they are not shown the proper respect. Described as being child-sized and hairy with a large head and a strange voice that sounds like the whine of a dragonfly. They are said to carve symbols on rocks and sometimes carve small canoes for themselves out of stone. Some people believe that their name comes from the Ojibwe word for "hairy," memii since Memegwesi are usually described as having hairy faces and bodies
These legends and an over-enthusiasm to believe in the discovery of a new cryptid has been smashed, and this video serves as a good example of not letting ones enthusiasm for the strange get in the way of fact, this because despite the almost perfect resemblance to these legendary creatures, the “Ewok monkeys” 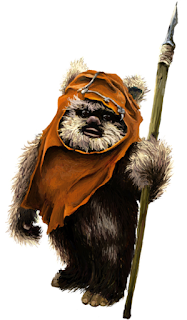 Were actually
In fact
Performance actors!!
The whole thing had been set up by travelling vocalist Tori Wranes who had staged the bizarre scene with a local acting group, it was his voice that could be heard echoing through the caves and not some strange ritual carried out by hidden creatures.
Onlooker Jemayel Khawaja recorded the video and said: ''So we were kayaking around Railay Bay in Thailand, turned a corner towards a cave, and found ourselves confronted with perhaps the most surreal and bizarre situation I've ever experienced -- Ewok-like troll creatures engaged in some cacophonic ritual in the water.

How disappointing after such a clear video and corroborating local legends we find out it was all stunt.
But the story does serve as a reminder to those of us who follow this subject. We must always take a step back and examine evidence
As Sherlock said incredible claims need incredible evidence
So its
Back to the drawing board, the search continues.
Let's hope the next cryptid video to go viral will be of something less easy to explain
Did you think this video showed a new type of monkey or small hairy human, have you been to Krabi and what strange sights did you see?
Let me know in the comments below.