Oumuamua has been the strange word on everyone lips recently the word meaning The name comes from Hawaiian ʻoumuamua, meaning 'scout' (from ʻou, meaning 'reach out for', and mua, reduplicated for emphasis, meaning 'first, in advance of'), and reflects the way this object is like a scout or messenger sent from the distant past to reach out to humanity.

Multiple theories have sprung regarding this object and I thought we could take a look at few and maybe reveal what it could be.

Oumuamua is an object from interstellar space and is the first we have seen enter our solar system.
Speculation has been rife with experts from Harvard no less weighing in with claims that it could possibly be an alien space craft
October 2017, astronomers operating the Pan-STARRS1 telescope in Maui found the bizarre cigar-shaped rock hurtling through our solar system.
First ideas of the object were that it was an asteroid but unlike asteroids seen in the past this one was travelling at phenomenal speed, an estimated 70,000 miles per hour.
This speed plays an important part in the idea that this could be some kind of space vessels as those speeds mean it is traveling fast enough to avoid being captured by the suns gravity.
This rock or ship has been steadily increasing its speeds and some have even reported that it has made course corrections, could this be some kind of probe destined for our planet?
Harvard professors Shmuel Bialy and Abraham Loeb investigated the recorded observations of Oumuamua and found that its motion could be explained by normal phenomena they did however conclude their paper with the inclusion that ‘Oumuamua may be a fully operational probe sent intentionally to Earth by an alien civilization.”
In this theory that Oumuamua is some kind of ship they say it could be craft that utilizes a light sail, a type of spacecraft propulsion device.
You can think of a light sail as being like a kite, but instead of being pushed by air in our atmosphere, radiation from the sun propels it forward. Humans have designed these light sails so it is a possibility to think, “Well, an advanced alien species might be able to make these things as well.”
If this was a craft, my mind jumps to movies like Battleship and the day the earth stood still… in these movies alien threats have arrived in vehicles that were first thought to be asteroids meteors or comets. 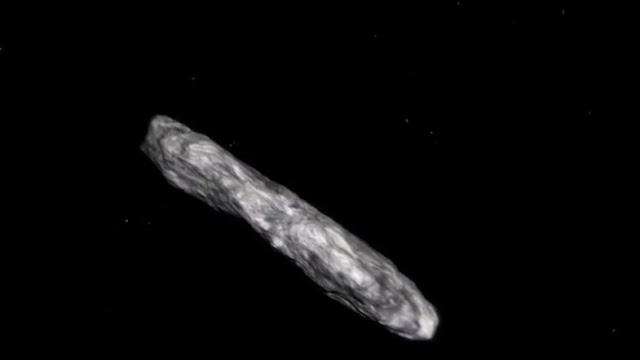 Could Omuamua be an alien Trojan horse, as we spend our time trying to figure what the object is it advances ever closer on a path that would not raise alarm, its trajectory bringing it into our solar system but not on an impact coarse without planet, well not yet!
And like so many sci-fi movies could this come as a result of us sending message into the cosmos.
Astronomers have recently sent a radio message to a star system which could contain habitable planets – and they it’s near enough that we could receive a reply in less than 25 years.
What if this message had been sent early and now that oumuamua is on its way they have to public release the details of a program which is trying to initialize contact, that’s if first contact hasn’t already happened. Which I think it most likely has.
Messaging Extraterrestrial Intelligence (METI) International.
METI is an offshoot of the more familiar SETI – the Search for Extra-Terrestrial Intelligence.
The target was a star in the goldilocks zone ‘the habitable zone’ of another solar system. They chose GJ273 as there is high probability of finding water and maybe in turn life.
The message was full of information on counting, arithmetic, geometry, and trigonometry, and included a description of the radio waves that carried the message.
There was, as well as a tutorial on clocks and timekeeping, to see if any potential inhabitants of GJ 273b have an understanding of time similar to our own.
This was not the first attempt.
In 1974 from the Arecibo radio telescope sent a message which contained information on the planets of our solar system, the structure of DNA, a simple depiction of what a human being looked like, and basic information about the earth and its inhabitants.
In the words of LEX Luther form batman vs superman
“The bell has been rung, and they are coming, and they are hungry”
Many have said that the idea of sending message out into space unchecked for all to hear is a bad idea. We could be inviting our doom.
Physicist Stephen Hawking spoke of the folly in inviting extraterrestrials which would far more advanced than us to our planet.
He is not the only voice of concern 98 percent of researchers thought that the message was a bad idea comparing the action, to something as stupid as standing in a jungle full of tigers and bears and other dangerous animals and yelling at the top of your voice!
So should be worried that evidence could tell us if this indeed an alien ship on its way to us with a nefarious plan.
The object successfully used a known tactic of increasing a crafts velocity by sling-shoting around the sun giving it enough speed to overcome the force of its gravity, then it did something unexpected It continued to speed up, being propelled by some inexplicable force.
Researchers noted that there must be something acting upon the object providing it a means to control its motion.
When the Hubble Space Telescope spotted Oumuamua in the beginning of January 2018, it was some 25,000 miles ahead of its expected trajectory.
There has been one a simple explanation for the acceleration.
Like a comet, it may have been expelling debris and gases from its surface; that would be enough to propel it along just like a rocket burning off fuel at the end of a spacecraft. 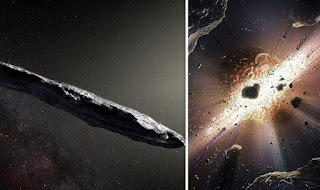 The problem with this is there has been no visible evidence of these jets.
Another strange occurrence is that when closest to the sun, it didn’t break apart like a comet would amid the heat and display a telltale tail.
So there’s evidence, both for and against the hypothesis that Oumuamua is a comet.
That being said as I mentioned  at the start this would be what we are meant to think, the ETs employing a trick famously used by the Trojans here on planet Earth.
What do you think oumuamua is, could be some kind of alien Craft, probe or weapon?
Are you concerned we could be seeing the vanguard of alien invasion?
Let me know in the comments below