Lake monsters have been with us for time and memorial. The most famous being the loch ness monsters but they are found over the entire planet.

it has been believed that  strange, dinosaur-like animals have existed within the murky waters of the world’s lakes.

There have been numerous attempts to prove the identity of these creatures, most come up empty-handed.

There have been many photos and even a variety of different “hits” using of sonar.

Many researchers take the mystery very seriously and continue to search for evidence and craft new theories.

It one of these ideas I want to look at in this video as I think it provides an extremely plausible explanation for what these cryptids could be. 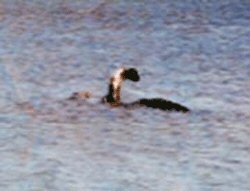 Some have the idea that these monsters are reptiles everyone knows the idea of a long-surviving plesiosaur but they have been ideas that another type of reptile could be the secret to unlocking the mystery.
Car-sized turtles called Carbonemys cofrinii that existed in prehistoric times. These creatures, as the image shows, certainly looked like a partially-submerged saurian animal, which are often reported at the locations of lake monsters.
“Champ” the Canadian Lake Champlain beast has been described as a creature that resembles a large turtle, or at very least, an animal resembling some variety of turtle or another type of large, stocky reptile.
Giant turtles are hardly the strangest explanation offered to us for sea serpents and lake monsters. Biologist Roy P. Mackal, and others, have suggested that the creature reportedly seen in Loch Ness might actually be “a variety of long-necked seal,” and this to me makes a lot of sense after all a mammal would be far more suited to the cold waters in which these animals are said to reside.
Drs Anthonie Oudemans and Bernard Heuvelmans hypothesized a rare long-necked sea was the cause of these legends and strange sightings.
They named the creature Megalotaria longicollis.
The creature they described looked a large sea lion and they said that like real sea lions the neck of the male would be very THICK, which is something witnesses have reported.
The description goes on to tell of how the length of the neck of a female would be more than four times its diameter. This is important, it would be the norm for this species.
Heuvelman notes, the big male is not more than three times the length of a female and the big males would be expected to be twenty feet long and maybe a little more. 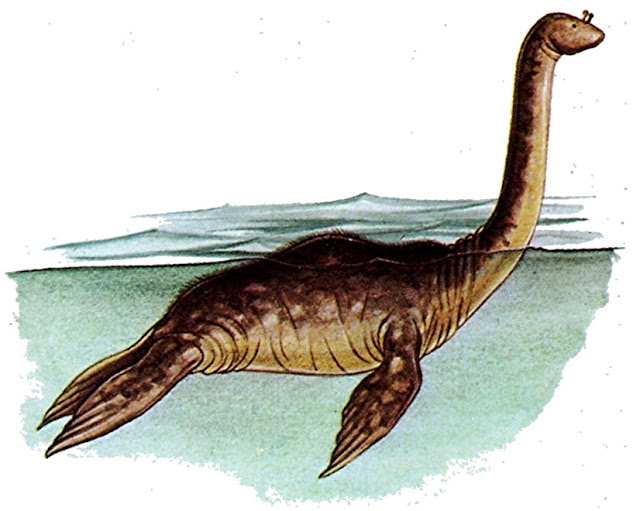 The hind flippers are somewhat close together and more like a tale of a whale. This species is claimed to have small spiky ear-pinnas and erectile nostrils. They have normal seal-like whiskers. The female could also have more developed hair on the neck but here it is slicked down as it is characteristically found in known seals. Males may have shaggy fur and mostly reddish-brown with a possible black circle around the eyes and the female has a more greyish-brown with darker spots.
They are huge seals, giant aquatic mammals such as elephant seals and walruses and this brings us to a report that could corroborate the theory.
In June and July 1971 at the White River near Newport in northeastern Arkansas sightings began to be reported, Witnesses told of a creature thrashing around in the water. Witnesses saying it was "the size of a boxcar" or "the length of three or four pickup trucks.
Other witnesses said, "It looked as if the thing was peeling all over, but it was a smooth type of skin or flesh."
Another person, who spotted the creature's face briefly, said the animal had a bone protruding from its forehead. Strange noises were attributed to the creature. It sounded like a combination of a "cow's moo and a horse's neigh."
Distinctly mammalian sounds.
This wasn’t the first time this creature was seen reports go back to 1915. Tracks were found on nearby Towhead Island.
The three-toed tracks were some fourteen inches in length, and lead to and from the river.
In between there was evidence that a creature of enormous size and weight had moved across the land, bending trees and crushing bushes in its wake.
So what is this mysterious creature?
Biologist and cryptozoologist Roy P. Mackal examined the evidence and decided "the White River case is a clear-cut instance of a known aquatic animal outside of its normal habitat or range and therefore was unidentifiable by the observers unfamiliar with the animal type.
He claimed it to be a large male elephant seal. 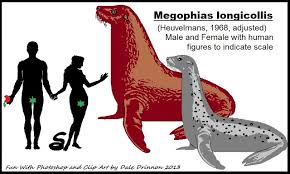 Elephant seals are truly huge creatures weighing 7,500 pounds with a length of 16 feet, is the largest member of the seal family.
Many of the characteristics noted by the observers of the White River Monster seem to fit with this animal. The moulting skin, tracks, sound and particularly the "bone" on the forehead all seem to match the creature's description. Elephant seals come in two types, living in the northern and southern hemispheres.
The fact that the animal appeared to be moulting during the northern summer suggests it might have been a northern animal.
One question that does remain if it were a lost elephant seal, how can it explain the older sighting?
Maybe a small breeding population?
If an animal the size and as well known as an elephant seal provides an answer in this case, could another type of aquatic mammal explain the other lake monsters we talked about?

It would show that these animals do migrate into new areas where they would not be commonly found. Could this of possibly happened with a type seal and over the years they have evolved the distinct long neck and other characteristics witnesses describe when spotting a lake living cryptid?
I think this is highly possible and could provide a new avenue for researchers
Do you think this theory offers a reasonable explanation for lake monsters?
Have you seen or do you believe in these beasts?
Let me know in the comments below 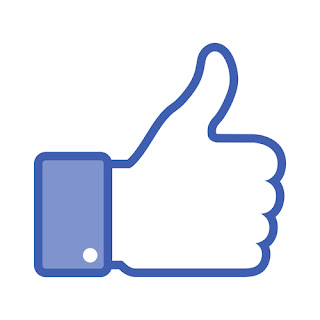 before I go I would like to say a big thank you to Morten Strandgaard my first patreon contributor.