Unidentified humanoids are a staple of many legends and are found in almost every culture on this planet.

We all know the big hitters in the man-ape world sasquatch bigfoot the skunk ape and the smaller cousins like Pukwudgies and gnomes and other little people of the forest.

There are however a few lesser known humanoids said to run around the wildness of the world.

the story begins with a volcanic eruption that occurred in the state of Washington in 1980.

Mount St Helens woke from her slumber with a thunderous roar, the mountain was blown in half scattering ash and debris over a distance of eleven states.

This eruption had a massive impacted on the area and changed the environment significantly but did it also allow something strange to be revealed as the dust settled?

after the eruption a bizarre flying entity began was seen in the area. A creature which was given the BATSQUATCH. 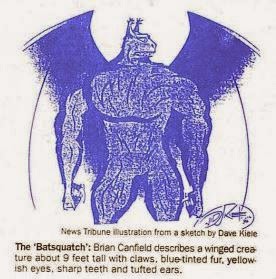 The people of the area seeing a crazy sight in the skies a giant flying purple beast that looked like a  cross between a large ape and a bat!
Flying cryptids are nothing new we have looked at the legendary Thunderbird the flying humanoids over California and other winged entities seen by people across the globe but this cryptid is something quite unique. A mix of animals that was until that eruption unheard of.
The Batsquatch is s described as a completely organic creature whose wings are a natural part of its body. it would seem that those that have witnessed this flying mystery have gotten a close enough view to distinguish the beast from other flying animals and even people piloted  craft  hang gliders and such like.
a large humanoid creature with the proportions of a sasquatch would need massive wings to lift its immense bulk. This would mean the smaller wings of the Batsquatch should make it a biological absurdity imcapable of flight.
yet it has been seen!
No primate in the world has or has ever evolved wings unless you include the flying monkeys from the wizard of Oz.
Joking aside, what are these people seeing?
The sighting gives us a general idea of the creature appearance of a purplish-tinged humanoid creature with glowing red eyes, bat-like wings and a distorted, bat-like face. The wings of the animal may either be large skin flaps between the arms and the body or membrane type appendages like the wings of a bat growing from the shoulder blades.
This was how the Batsquatch was said to look when it first showed itself after the eruption.
The sighting of old Batsy continued through the 1980s there were even reports that this cryptid attacked sheep and cattle, reports which could easily be hysteria and just be the work of wolves coyotes or cougars.
there is one outstanding sighting that is very well documented, this happened in 1994.
Brian Canfield a teenager at the time was driving his truck along a quiet stretch of backwood road, bad luck struck the young man as his vehicle coughed and spluttered finally rolling to ahult at the side of the isolated road.
Brain sat in the road headlights on, thinking about his next course of action, when a huge shadow entered the beams of the truck's headlights.
descending from above the truck an animal the likes of which the scared man had never seen before or since.
at a height of around nine feet with clawed feet and covered in a bluish fur. Brian noticed its muzzle filled with sharp teeth and glowing eyes which looked like they had a spark of intelligent.
The man and beast looked at each other for several minutes, then the Batsquatch twitched and enormous wings spread out from its back. with a heavy swipe and gust of wind, the weird entity took off back into the night sky.
The young man was then able to restart his stalled truck and head to his destination, with one hell of a story.
This story was picked up by local news organisations and broadcast heavily this is when the animal gained its name "BAtsquatch"
The creature was sighted once again this time by a pilot, Butch Whittaker. he was flying his small plane over the area of Mt, Rainer when the cryptid is said to have flown up from the mountain and then alongside the plane getting dangerously close. Whittaker says he took a photo of the incident but to this day he has shown no one.
2009 is the year of Another unusual sighting.
A group of hikers were scared witless by a large man-like flying creature that had enormous wings. these Witnesses clearly stated that they had seen an animal which had the “head of a bat”.
There are other cryptids such as the Ahool, Orangbati and Olitiau that are described as being like giant bats.
These have even been investigated by the national geographic.
The held an expedition into the heart of the Indonesian jungles searching for the Orangbati, they didn't find anything more than legends stories and exaggerated tales. They did, however, conclude that a real creature could be the truth behind the legend a flying fox bat.
The flying fox is the biggest species of bat in the world and seeing one of these winged behemoths at night could easily frighten someone into thinking they were something larger and more grotesque and possibly supernatural.
so could Batsquatch be an unidentified species of flying fox?
its possible but unlikely as this species is normally found in tropical climates but maybe its a theory we shouldn't be so fast to rule out
Bats do enjoy roosting in caves, could the eruption and subsequent destruction of the mountain have left this bat homeless and now its new home has made it more visible to people of the area?
other theories of the beast origins are more fantastical, with some claiming the blast from St Helens broke open a portal to another dimension which Batsquatch entered through. Others say it is a truly paranormal entity in a group similar to Mothman. This idea coming from the pattern of flying humanoids often being spotted before and after large disasters.
so if you’re thinking of taking a  hike in the Washington area or around  Mt. St. Helens keep one eye on the sky you may never know who might just drop in.
What do you think this flying cryptid could be?
Has Bigfoot decided to take a leaf from Bruce Wayne's book or could it be something from nature like a flying fox?
let me know your thoughts in the comments below.