Maharashtra Lost Civilisation "IF" There was a single prehistorical culture?

History is often shown as a linear progression, mankind evolving as a society. Developing ever more complex technology, and larger and larger societies.
This mainstream idea of our past, being the only plausible history for many. There is, however, a whole range of different ideas on humanities development in antiquity. The multiple theories on the history of Egypt and who built the pyramids along with stories of Atlantis giving our history a fantastically gilded image.
However, from time to time evidence does come to light that shakes up or smashes these established ideas. We took a look at this idea with the discovery of the Land of Mu in another video when geologist discovered a new lost continent in the Indo – Pacific Ocean.
This rediscovery of a once unknown lost society has happened again this time in India. In this video, we take a look at this lost civilization and see if it has any connection to the legendary civilizations of the past? 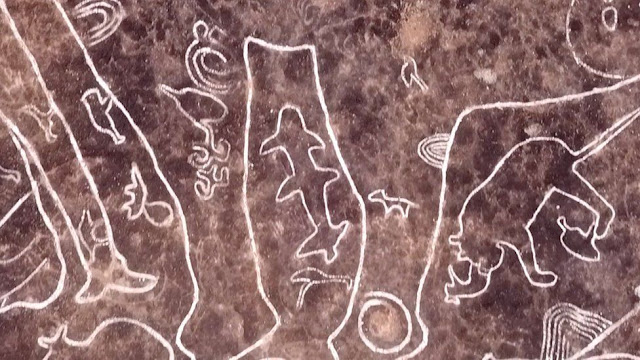 An Indian western state has been hiding a secret for tens of thousands of years, the archaeologist from the area known as Maharashtra have just uncovered a collection of rock carvings revealing a long-lost civilization.
The region named Konkan is home to thousands of hillocks, this being the location of the discovery of petroglyphs. Somehow these ancient rock carvings have remained undiscovered.
Most of them were hidden beneath layers of soil and mud. But a few were in the open - these were considered holy and worshipped by locals in some areas.
The difficulty in clearly seeing these ‘rock works of art’ coming from the layers of mud and soil that covered them, the archaeologist were tipped off to the presence of the petroglyphs because of a few locals who still worshipped at the locations where these images were uncovered.
These Indian villages praying at the feet of animals, birds, human figures and geometrical designs carved deep into the rock.
The way the petroglyphs have been drawn, and their similarity to those found in other parts of the world, have led experts to believe that they were created in prehistoric times and are possibly among the oldest ever discovered.
The archaeologist was surprised when they viewed these petroglyphs, this because they are strikingly similar to others carved at ancient sites spanning the globe.
Could this be yet more evidence that there was a singular global culture in the past, this culture destroyed and humanity cast to the corners of the globe to rebuild in what became the fractured cultures of today’s planet?
The dates are given by the Maharashtra state archaeology department putting these glyphs at around 12000 years of age. 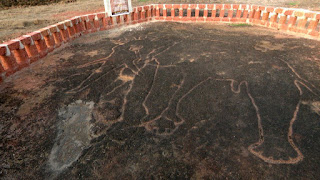 The discovery of these petroglyphs has been credited to Sudhir Risbood and Manoj Marathe this pair explored the area after seeing a few images in the region and witnessing worship at village temples and listening to local folklore.
After hearing these stories and talking with the elders of the community they began their hunt. Locals would often bring them photographs of carvings they had uncovered or discovered.
This local help enabling them to find engravings at 52 different locations. Strangely only five local villages had any idea that these amazing artefacts were so nearby.
The two explorers are working hard to preserve these sites at the same time studying them hoping to reveal the hidden secrets of the lost civilization.
What has been revealed is that these glyphs are thought to have been created by a hunter-gather society. They reached this conclusion from the types of images which were carved into the rock, these did not include farming activities but mostly wild creatures from land and sea.
These most likely being the animals, birds, and fish the civilization hunted.
There are images of sharks and whales as well as amphibians, turtles, hippos and rhinoceroses which oddly aren't found in this part of India.
Did the people who created them migrate to India from Africa?
Or were these animals once found in India?
Once again it would seem that evidence is pointing to a singular culture, this then leads us into the many different ideas on what disaster or disasters wiped this founding civilization from the planet.
Do you think there was once a single human culture spanning the globe?
Do you think this could explain the many commonalities found in cultures separated by land time and culture?
Let me know your thoughts in the comments below.