Dropa Stone Discs "IF" Ancient Chinese UFO Mystery? We are IF We are IF


There have been many reports of alien bodies being discovered on this planet. The most commonly known story being that of Roswell New Mexico.
We have watched as Dr Greer had the body of a Chilean mummified corpse analyzed to see if it was extraterrestrial,and  the infamous alien autopsy videos that can be found on the internet.
One discovery of alien bodies that may well be more credible, this down to evidence discovered alongside the bodies, is the Dropa alien bodies  and the Dropa stones. 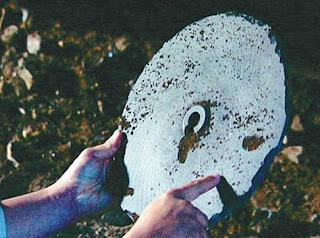 So who or what are these mysterious beings known as the Dropa.
They can be found to this very day living in isolation but these people are not aliens or descendants of aliens but a tribe that anthropologist say do not fit in with Chinese or Tibetan lineage.
Members of the dropa tribes are what would be considered pygmy size, the adults height measuring somewhere between 3-foot-6 and 4-foot-7  average height of a tribe member being measured at 4-foot-2.
They are very slight in their build  weighing in at 38 to 52 pounds with thin bodies and disproportionately large heads
The skin is off-white edging toward a shade of yellow with very little body hair and with large eyes that are not Asian in appearance, but have pale blue irises.
This description has many of the same characteristics as skeletal remains found in caves of the area in 1938.
These remains being part of this peoples legends and folklore, they tell stories of a crashed UFO and  lost alien occupants.
The ancient story says how a small, slender, yellow-skinned people fell to  Earth from the heavens, they were shunned by the local population due to their ugliness.
the legend tells of how a  space probe from a far and distant planet crash-landed in the Baian-Kara-Ula mountains of the Himalayas.
The aliens who piloted the spacecraft – “the Dropa” – probably scared, hid in the caves hid of mountains.
The Dropa were said to be peaceful in nature, this didn’t protect them from being misunderstood by members of the local Han tribe who called nearby caves home.
They hunted down these stranded alien and killed a few of them.
There is some hard evidence that gives credit to this story.
several ancient, neatly arranged burial sites, these graves containing the skeletal remains of several small, frail and spindly people with disproportionately large skulls.
In what seems like a desperate attempt to explain the possible remains of the ET beings a team who explored the caves suggested that the remains may be that of an unknown species of  mountain gorilla. Professor Chi Pu Tei is reputed to have responded, "Whoever heard of apes burying one another?"
Agreed Professor Tei!
More proof comes in the controversial artifacts known as the dropa stones or dropa discs.
These carved stone discs became more notorious when a story emerged which claimed that In 1938 an archaeological expedition led by a Professor Chi Pu Tei, explored the mountains. This was to survey a series of interlinking caves that border China and Tibet.
the team found the cave and discovered the several small bodies, along with 700 small round stone discs.
These stone discs said to document an alien crash-landing on earth 10,000 years ago.
the caves themselves are said to have been artificially carved and resembles an underground complex more than a cave system, this because of the what looked like a system of organized tunnels and underground storerooms.
The walls of these caves or tunnel being squared and glazed, suggesting they were carved into the mountain using some source of extreme heat.
These glazed walls also displayed a large collection of petroglyphs and pictograms these showing complex star maps and celestial bodies that were most likely unknown to peoples of that area at that time.

And in the dirt half-buried in the floor of the cave was a stone disk, something made by intelligent hands.
The disk was approximately nine inches in diameter and three-quarters of an inch thick. In the exact center was a perfectly round, 3/4" hole, and etched in its face was a fine groove spiraling out from the center to the rim. The groves were found to contain 'almost microscopic' hieroglyphs.
A further 716 such discs were retrieved from the cave.

These artifacts were then placed into storage for the next 20 years.
Beijing university holding these discs in secret until 1962 when a Chinese scientist called Dr Tsum Um Nui stumbled upon them whilst he was working for the Prehistory Department of the Beijing Academy.
He studied the discs and is said to have deciphered the inscriptions, and successfully translated the text from the discs.
The Chinese censorship machine went into overdrive after reading The paper written by the professor when he presented his discovery to the university before its publication.
The Academy of Prehistory expressly forbade him from publishing or even speaking of his findings and for over two years it was hidden until he bravely published the paper himself.
Dr Tsum Um Nui's translation was ridiculed.

Then in 1968, the Dropa stones caught the eye of W. Saitsew, a Russian scientist. He re-published the findings of the professor and carried out tests on the disks these revealed more peculiar properties.
cobalt and other metals were contained high concentrations inside the granite of the stone  -  granite being a very hard stone would have made it almost impossible for the primitive people to carve the lettering, let alone characters that are so tiny.
oscillograph was used to test the discs, a surprising rhythm was recorded the scientists saying this made them believe the discs had once been electrically charged or had functioned as electrical conductors. 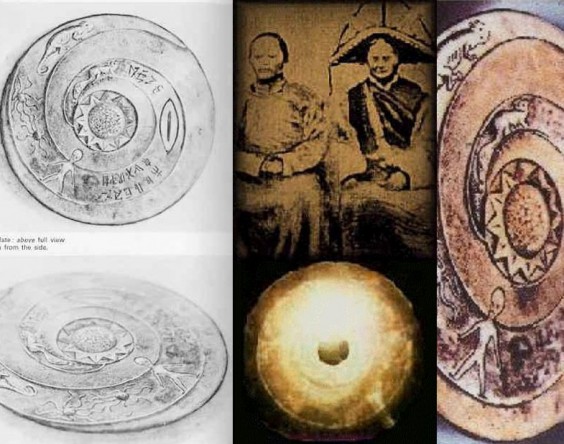 so what message did these alien castaways leave?
The professors' translation of one of the passages says: "The Dropa came down from the clouds in their aircraft. Our men, women, and children hid in the caves ten times before sunrise. When at last they understood the sign language of the Dropa, they realized that the newcomers had peaceful intentions....". The stones go on to say how the Dropa were unable to repair their disabled spacecraft and could not return to their home planet, and so were stranded on Earth.
Is this proof that ET first landed in ancient China?
are these stones an elaborate hoax?
What could explain the remains found in the cave and the different appearance of the dropa and the legends that they are descendants of star beings?
let me know your thoughts in the comments below