Cryptids Explained "IF" The Tatzelwurm Lives?


Its time for another cryptid video, this time we take a look at a serpent type creature that could be the inspiration for tales of dragons.
The Germanic legend talks of a strange beast that would seem impossible to exist but they have been sightings and the creature periodically pops up in cryptozoology news.
Some say this beast is on the brink of extinction and others claim it to be no more than fantasy.
So let's take a look at the cryptid which is known as the Tatzelwurm. 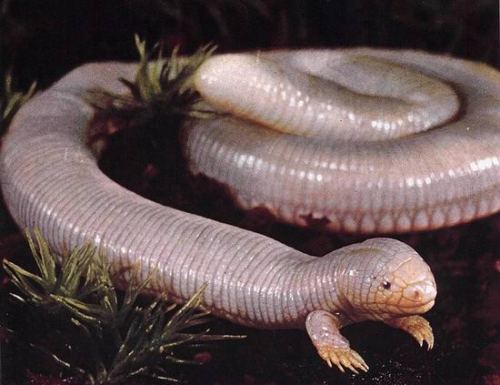 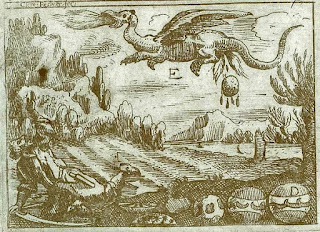 Dragons area cryptid which spans many cultures around the world from the sleek serpent type which is popular in Asian and middle eastern legends to the beast which have a taste for maidens and  a weakness for gold found in stories from Europe.
What has inspired these legends?
Why is it , that they are found across the globe ?
what inspired such beast?
Many make the comparison between the familiar shape of dragons and dinosaurs and think that dragons may have be a way to explain the finding fossils in a time when dinosaurs were named.
But, what if the answer is something else what if there is a creature that could possibly offer us an explanation, well to the European dragons at least!

the Tatzelwurm, which is German for the clawed worm, has been a rumored creature found within the Alps of Austria and Swiss mountains for more than 250 years.
The Tatzelwurm is also called the Stollenwurm, this alternate name meaning the tunnel worm, along with the Bergstutzen, and Springwurm.
the former suggesting that the beast is capable of making impressive jumps. This abibilty could be why dragons are thought to fly.
Descriptions of the creature can vary somewhat, however the common description tells of a short lizard-like creature with one pair legs with a body length around six feet long.
There are a few descriptions of the Tatzelwurm that say it has four legs, the animal having  3 toes or fingers with long sharp claws. 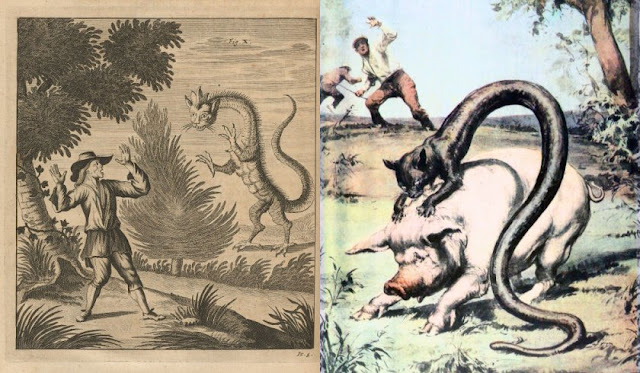 The earliest documented encounter with a Tatzelwurm came in 1779.
Two of these cryptids appeared to a village head named Hans Emil Klaus Julius Fuchs.
The sighting of this animal scared Hans so badly he suffered a fatal attack dying shortly after his ecounter !
before his death, he was able to tell his family of the encounter.
There is a famous painting commemorating Hans death; the German cryptozoologist Ulrich Magin, says that this depiction of two lizards like creatures is the best proof we've got for the Tatzelwurm s existence.
There are a few more pictures of the strange reptile, A Bavarian wildlife manual from 1836 includes an illustration of the cryptid in a section that refers to animals seen in woodland and the Swiss almanack 'Alpenrosen' of 1841 shows a scaly creature with 2 little front legs.This is assumed to be the Tatzulwurm.
from the 1800s we jump to 1954, a Swiss man by the name of Balkin made  claim that he had photographed a Tatzelwurm.
The picture he snapped causing a flurry of interest in the mysterious beast and an expedition was arranged to search the area where the picture was taken, this search didn't yield any fruit and left many claiming the whole story was a fiction and the famous photograph was a hoax.

Another piece of proof which many also say to be a hoax was the discovery of a Tatzelwurm skeleton.
the Geneva Institute of Science took possession of the skeletal remains during the 1900 s. The skeleton was snake-like with two clawed arms and a  head which was bigger than normal  proportions when looking at its body.
We sadly can't subject these remains to modern testing because as often is with this type of thing, the skeleton has been lost. The lack of a body again having people call hoax when discussing the Tatzelwurm.

Bernard  Heuvelmans, regarded as the father of Cryptozoology by many, believed` that the Tatzelwurm was a real venomous lizard living in the Alps.
He believed the animal to be some kind of amphibian,  saying that it could be a European relative to genus Megalobatrachus, the endangered large Salamander found in China and Japan.
so with a distinct lack of hard proof, we are back to witness sightings and they are many more than poor old Hans.
In 1828 a peasant found the remains of a Tatzelwurm, he managed to take the remains home,however the carcass was subsequently eaten by crows and this the specimen was lost.
throughout the 18 and 19 hundreds, it was an excepted fact that the Tatzelwurm was a real animal with many other incidental tales, like the peasant boy, keeping the story alive.
another story tells of a farmer and his son who were out gathering herbs high up in the mountain valleys.
The son rounded a rock looking for more herbs to pick, this is  when his father heard him let out an almighty scream.
Rounding the rock himself he saw a ‘gruesome monster’ behind the rock, worryingly close to his son.
The animal hissed like some sort of a snake but its face was not that of a serpent but something more feline looking, with huge bright eyes.
The father protecting his son stabbed the Tatzelwurm with a sharp stick, this weapon punctured the creature's skin sinking into its flesh.
‘blood’ sprayed out of the animal and when it hit the mans leg it burnt as if it were some kind of acid.
This reminds me of another acid spitting worm found in cryptozoology "the Mongolian death worm" could there be some relation in these creatures?
So what creatures that are excepted by mainstream science could this cryptid be related to?

there is the obvious comparison to snakes and other reptiles, we know of animals like the Italian Skink, the Mexican mole lizard and we have the fossil records of Tetrapodophis and other flap-footed lizards.
I would think that the idea of the Tatzelwurm being a reptile or amphibian is slim as the area is not an environment suited to reptiles, let alone a six-foot-long species.
Mammals do thrive in the area, could they provide an answer?
species such as stoats and weasels could match the described long slender body and cat-like face but they do not have the size and are obviously covered in hair and not scales.
as for the creatures acidic blood, maybe that could give us a clue.
Insects often have this trait, along with arthropods like centipedes and millipedes. Insects also have an uncanny knack of evolving to look like other creatures.
Could the Tatzelwum be some kind of super large arthropod?
Or maybe it is a dragon!!
Sadly Tatzelwurm reports have all but ceased in recent years, this leading some to claim that the animal may now be extinct if it did ever exist.
What do you think the Tatzelwurm is or was, is it a creature of fantasy or do you think there is the possibility of an unknown small dragon-like beast hiding in the picturesque mountains of the Austrian Alps?
Let me know your thoughts in the comments below.
at October 17, 2018