Australia the land of some of the strangest and deadliest creatures on the planet. Its unique geographical terrain and location have given rise to some unique creatures.
Sadly many have been lost to extinctin, but in a similar note to the recent rediscovery of the lost bear in Russia. Another one of these lost animals has been found. In this video lets take a look at a species of thought to be etinct  kangaroo and ask if it could offer us hope in finding other lost animals and possibly cryptids 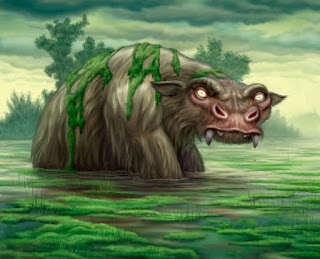 A lost species of kangaroo has been found and photographed for the first time in history, this lucky sighting captured by a tourist to the area.
The British holidaymaker Michael Smith snapped a picture of the tree kangaroo or Wondiwoi to give it its proper name. When we think of kangaroos most peoples mind jump to the continent of Australasia but this tree-dwelling marsupial was found in a place we have mentioned in other cryptid videos Papua, Indonesia.
It seems that this location keeps giving stories and sightings of extinct creatures and animals that are meant to mythical.
The wondiwoi is a creature that heads up the 25 most wanted lost species along with creatures such as the Wallace giant bee, the shovel-nosed sturgeon, and sinu parakeet.
The last time anyone had seen this animal was way back in 1928 and until this picture it had never been captured on film.
Michael was on a two-week expedition to find a new species of orchids in West Papua.he turned his sights on the long-lost Tree Kangaroo after spotting claw marks on trees.
The intrepid tourist manage to track the tree kangaroo in the area he was exploring after staking out the area he caught a glimpse of something that resembled a teddy bear 30meters up in the tree canopy he took out his camera and snapped away catching the image of what experts said was extinct.
There are plans in place to return to the location of the picture with conservationist camera traps and other equipment in an attempt to verify that this species is back from dead.
The area remains largely untouched and unexplored due to the remote location and impenetrable thick vegetation on steep slopes.
So if anything needed a place to hide this would be perfect.

So this got me thinking of other cryptids and one which has interested me since a child was a cryptid which could also possibly some strange and undiscovered species of marsupial the Bunyip. 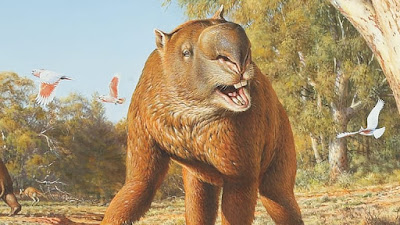 This animal common to aboriginal folklore is said to be a river and swamp-dwelling beast. Tale tells of how the creature will defend its watery home from those foolish enough to enter.
The Bunyip has varying descriptions with the appearance ranging from something reptilian like a crocodile to a creature covered in feathers said to have long tail tusks and flippers, this animals unusual mix of features making it iliar to the platypus.
Or maybe it could even be part of the same animal, being a larger variant of the species?
To prove this,and  show that the bunyip
is more than mythical would take evidence, so has there been any hard proof beyond aboriginal tales and strange noises in the night?
In 1846 there was a discovery of a large strange skull in an isolated area associated with ‘Bunyip calls' seemingly providing physical evidence of the Bunyip's existence.
The Bunyip skull was found on the muddy banks of Murrumbidgee River in New South Wales, submitted to and examined by experts who concluded that the skull was from a creature unknown to science.
In 1847 the strange Skull was put on display at the Australian Museum in Sydney. During the skulls exhibition at the museum for a period of two days, the Sydney newspapers reported a large increase in Bunyip sightings.
The skull had created Bunyip fever and everyone was associating each and every strange shadow and noise in the night to the Bunyip.
This all died down when other experts claimed that the skull was nothing more than a disfigured cow or horse, seems like a convenient explanation to calm people down.
So if we speculate and suggest that what they found was a real Bunyip skull are they any creatures from the past that could give us an answer to what has been a creature of legend for so long?
Diprotodons were large rhino-sized plant-eating marsupials, thought to have gone extinct some 10,000 years ago.
So maybe just like our friend the tree kangaroo or the Russian bear, we covered in another video could it still be around just on the point of extinction a few creatures hidden eking out a quiet existence?
Diprotodons shared many of the same physical features attributed to the Bunyip.
They had a face like that of a dog, as well as a long shaggy coat maybe this could look like feathers when wet?
A few Scientists have proposed the theory that the Bunyip is a seal, a common marine mammal found along the coasts of Australia but that doesn’t explain how if it were a seal it could cross massive baron and dry stretches of land to inhabit a swamp or a billabong.
Bunyip Sightings have decreased in recent years leading some to claim that if the creature was a fact it too has now joined the ranks of the extinct.
Had you heard of the Bunyip before, what do you think about the rediscovery of another said to be 'extinct animal'?
What other creatures do you think we will find again someday soon?
Is the Bunyip a known creature of antiquity or something new to science?

Let me know your thoughts in the comments below
at September 01, 2018