The giant squid is a creature that has gone from myth and legend to fact. The old sea tales of krakens and sailors being dragged to the bottom of the ocean were once scoffed at but now we know that they were probably true.

The giant squid still remains enigmatic the behemoth rarely being seen, and science still has a lot to learn about these highly intelligent super predators.

This knowledge improves little by little each time there is a sighting or the discovery of a dead animal. This is something that has just occurred with Divers Finding an Enormous, Squid on a New Zealand Beach 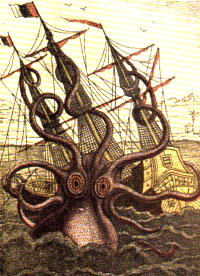 The recent finding of this underwater giant may help scientist gain more understanding of the underwater 8 legged monsters found on  Saturday 25th of august by spear fisherman on the Wellington beach in New Zealand. The pictures show how these men are dwarfed by the cephalopod.
At a length of 13 feet or 4.2 meters this is a large animal but at its biggest it is said that these creatures could get as big as 16 feet.
This creature is said to be a smaller ‘Architeuthis dux’ not the beast which most likely inspired the legends of the Kraken ‘Mesonychoteuthis hamiltoni.’
This large slab of calamari would have been made to look small if it had been a colossal squid as they can break 30 feet in size.
This information is highly speculative as gather any kind of data on these animals is notoriously difficult. Most of what we do know has been gleaned from accidental captures and specimens washing ashore.
So with these legends of the deadly Kraken attacking boats, sailors and creatures as large as whales do we see these behaviors playing out in the real world with these two species of giants?
The short answer is yes!
And here are three tales of frightening squid attack they may well have you staying out of the water!

In this clip, we can see a monstrous squid attacking a diver in the ocean depths.

We can see the diver is just taking footage of the elusive creature when from the murky depths a squid decides to go on the attack.
Wrapping the diver in its tentacles the man is almost powerless to fight back. This smaller species of squid-like other large squid has hooks running along each of its tentacles, these grabbing the diver with ferocious strength.
We can see the animal attempting to pull the man toward its mouth a beak like an apparatus that would have easily torn through the man and crushed his bones, probably being able to tear the man limb from limb.
This sounds just like the old sea tales to me.
Luckily the diver manages to break free and heads for the surface no serious injuries thankfully

Incredibly, though, it’s not the first time the elusive sea monsters have attacked visitors to their
Scott Cassell diver and filmmaker was also attacked by the angry eight armed underwater terror.
He tells of how the creatures dragged him underwater at ridiculous speed breaking his wrist and dislocated his shoulder.
If attacking a diver is not close enough to the legends of the Kraken and its attacks on the sailing ships of old. How about an attack on a submarine.
Two green peace workers were using submersible in one of their projects, this is when a giant Humbolt squid decide to attack them.
Spraying ink as they swarmed the small submarine containing the two people.
The Humbolt squid may not be the size of the cephalopods we have already mentioned but they more  than make up for that size difference with aggressiveness that is legendary, it’s even earned them the nickname red devils.
The bright red color coming from their ability to manipulate and change the shades and color of their skin. This is thought to be a method of communication but it also adds to the terror when they attack. Flashing through an array of colors and back to bright blood red, they become a colliderscope of terror. 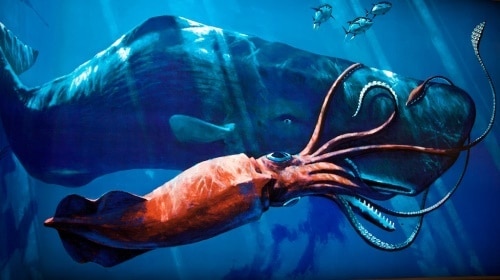 These tentacle menaces have killed.
Reports coming out of Mexico document how a pack of squid capsized a fishing and attacked the fisherman in a gruesome spectacle witnessed by many from the beach.
One of these witnesses talk about seeing bodies washing ashore. He said these unlucky souls were black and blue all over and covered in circular lesions from the squids suckers.
One survivor washed up with the bodies this unfortunate man was almost unrecognizable.
Biologists commented on this horrific incident, they think that the attack was from a coordinated group of female squid. This attack was so bad it had the local government creating a cordoned off area of the sea, this so no one else would fall victim to the locally known ‘diablos rojos”
One scary fact of this incident is that it is likely to happen again, dwindling fish stocks will put man and beast at odds in the future.
These giant squid will make an unmatchable advisory for anyone who takes to the water with them.
Their size, the gang mentality, eight strong flexible arms and two longer tentacles with large pads to grab prey, all covered in suction cups lined with small teeth.
Cardio would not be an issue, with their three hearts.
Eyes the size of soccer balls mean they can easily spot anything even in the darkest of ocean waters.
All of this would be enough to keep me out of the water.
How about you?
Would you like to see this squid up close?
Do you think the stories of the Kraken pulling down whole ships could be true?
Let me know in the comments below.