Old castles, churches, and abbeys have and will continue to be a hotbed for paranormal activity.
From the ghostly figures spotted at Berry Pomeroy to our video on haunted objects its something, I enjoy covering on the channel.
In this video, we have another ghost sighting from the UK.
This time a spectral apparition in the form of a hooded monk has been seen and
The photos of this ghost are very compelling 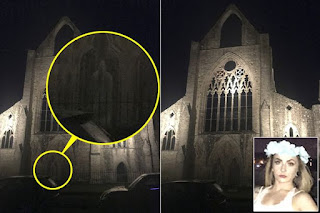 A ghoulish figure of a hooded monk has just been snapped at Tintern Abbey Wales.
This abbey has a long history being founded by Walter De Clare the lord of Chepstow in 1131.
Located on the border of Wales and Gloucestershire in the village of Tintern.
A place featured heavily in local folklore.
legend telltale of how the Devil once preached from a pulpit made from a rocky outcrop near the abbey.
Lucifer, Up to no good as usual,  was attempting to lure the Monks of the abbey from their faith.
The Devil was unsuccessful in his efforts and to this very day, the spirit of one monk is said to be seen frequently, praying at one of the arches nearest the Devils Pulpit.
keeping satan at bay.
Tintern Abbey monastery was home to over 400 monks and abbots in its heyday.
life at the abbey was an idyllic bliss for many years, this until many of the monks fell to tragedy.
the plague and Black Death decimated the population of the British Isles and the Monks were no exception.
Following this, the monk had to endure The religious persecution of Henry VIII. The king forced the closing of the abbey along with many other religious refuges through Britain during his Reformation.
This led to its abandonment in 1536, 400 years after the founding.
With this kind of history, it is no surprise that  Tintern Abbey is said to be haunted?
So what was it that was recently seen haunting these ruins?
Well before we look at the pictures. 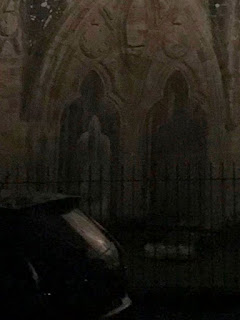 don’t be a ghost to the channel, let me know you’re here by leaving a comment or a like and maybe if you enjoy the video and want to see more on the paranormal and weirdness of this world.
hit that subscribe button and ring that notification bell.

Our witness is a miss Rosie Boulton, was exploring the Welsh abbey but did not see anything unusual whilst on her adventure – it was not until she returned home and examined the pictures she had taken that she saw something surprising and creepy.
Rosie a bit of a fan of the paranormal had seen strange things before once spotting spectral orbs.
Touring the country and investigating many haunted locations each week, Rosie is constantly traveling snapping pictures of many of the countries old ruins of an evening. but her past experiences paled in comparison to what she had uncovered at the abbey.
Her camera had unknowingly captured the image of A ghostly ‘monk’.
Rosie reports how herself and friends had no unusual feelings when they were at the location of the picture, but did feel creeped out by the abbey.
The monk or some other type of 'hooded figure' is seen standing in front of the ruins in what is a surprisingly clear photograph.
Having always had a  belief in ghosts and the paranormal, Rosie could not believe her luck when she first saw the picture and said she can't wait to visit the location again.
Rosie commented saying: "I get an adrenaline rush, especially when it's dark because it sets that eerie vibe.
"I felt okay at the beginning but it was a huge place which made it feel a little more spooky.
we had a 'creepy' feeling in the area but did not see the ghostly figure until later
"You're not supposed to go there at night. We felt like someone was coming towards us so we all ran out as we were scared.
"I didn't know about the ghost of the monk until I got home and looked back at the pictures.
"I was on my own going through the photos and it just freaked me out. I called my friends and told her about the photos straight away."
"I want to visit more eerie ruins, like abandoned churches."
This photo is definitely spooky and It's a really clear image
the abbey has been the location of many ghostly sightings of spectral monks and other spiritual entities. 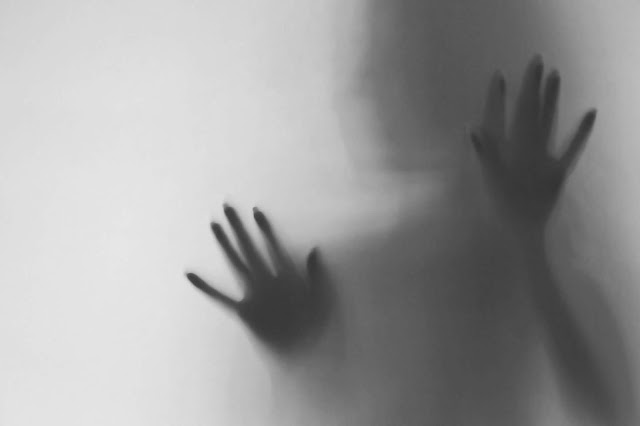 Do you think that this woman captured such a paranormal with her camera or could it just be a trick of the light or some other optical illusion?
Do you believe in ghosts, have you yourself seen a ghost?
Let me know in the comments below.