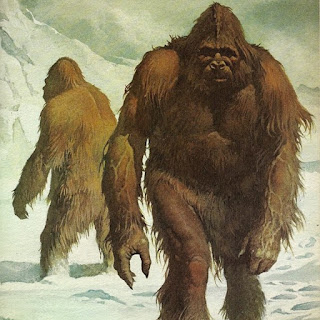 The world of Cryptozoology has once again been given hope as a species of thought to be extinct Russian bear was rediscovered, not just surviving but thriving in the wilds of the  Altai Mountains.
This is in its self is very exciting news, but what could this mean for the more cryptid creatures out there like the Almas?
The bear known as the Sailugem bear was captured by tourist cameras unexpectedly while the took a trip through the national park.
this large mammal was said to have died out some 60 years ago and other experts claimed that it was a mythical creature. 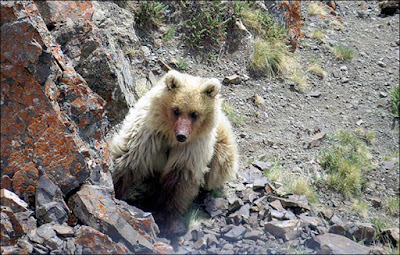 This species can be told apart from its brown bear cousins, due to its lighter almost blonde colored coat with large white claws, and unlike the brown bear, it prefers a highland habitat to the forest home of its cousin.

These pictures are hard photographic evidence for a creature that was only found in an artist's impression made in the Soviet era.
This brings us to the Almas.
This area of Russia borders  Kazakhstan one of the most secretive nations on the planet and Mongolia.
For centuries stories of wildman have plagued these areas.
Much like Bigfoot the Almas was thought to be a creature of myth, evidence of the cryptid again like bigfoot being sparse.
The Almas is said to ape-like in appearance. found throughout central Asia, Russia, and the Caucasus.
The people of these regions describe the Almas as a human-like bipedal creature which stands between five and six and a half feet tall, that's quite a bit shorter than reported Bigfoot measurements, this could also help with the legitimacy of the stories.
Many species found in the area have cousins living in North American wilderness and although not all there is a pattern of the North American species being larger.
but back to the Almas
They have a human-like appearance or better comparison would be a neanderthal with their pronounced brow-ridge, flat nose, and a weak chin.
The body is covered in reddish-brown hair, some sightings have them wearing primitive clothing, made from animal skins.
Over the years many reports have told of interactions between the Almas and humans, with successful communication between the two parties coming from hand gestures.

These stories have been recorded locally for hundreds of years and the West knew nothing of this creature that was until British anthropologist Myra Shackley read Tibetan medicinal books.

These books contained drawings and descriptions of all flora and fauna in the region and you have guessed it the Almas can be found amongst them.
Actual hard evidence has been difficult to come by footprint casts, and even photos, but no physical evidence of the Almas has been reported.

This creature, like Bigfoot and other hominid cryptids, will need to be captured or a body found in order to show it exists.

This brings us full circle to the bear a creature that is easily excepted as being possible so why is it Cryptid hominids like the Almas are not?
If the environment is sufficient enough to support a large animal like a bear it could easily be able to support a hominid. 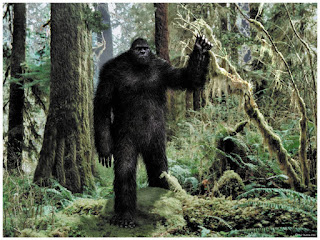 The two share some basic needs both are omnivores both use the natural shelter and both would cover a large range when gathering or hunting food, this making a sighting difficult.

Do you think the Almas could be roaming the Mongolian steps waiting to be discovered just like this bear?

Do you think the Almas and other hominids are just myth?
let me know your thoughts in the comments below