Who is Lutz Heck?

A Nazi zoologist with dreams of a Jurassic Park.

Did he have plans to create T-rex for the German soldiers to ride into to battle?

we look at the weird creations of a man who had the idea of bringing back long-dead creatures before the story of rampaging dinos we are all so familiar with today was even penned.

let's take a look at the Nazi Jurassic park!!

Lutz Heck was a German zoologist who roamed the world looking for animals and he had a plan which was supported by the Nazi regime, this plan was to bring back a long extinct bread of large, horned cattle called aurochs.
This bovine monster was not the only beast he had his heart set on, his plan was to recreate a whole menagerie of animals that once roamed the Rhineland of old.
A Nazi Jurassic park!
This eventually lead to the crazy zoologist breeding The Heck cattle a long-horned naturally aggressive beast still found in Europe today.
He also created breeds wild horse similar to those of long ago.

taking over the Warsaw Zoo by 1941, he filled the zoo with animals he wanted to help populate his park the others he found on his travels those he did want to keep, he hunted and killed. something he was said to really enjoy.

His and by extension, the Nazi's ambition to create a park filled with animals from the past seemed to be a certainty. This park would be used for German men to hunt and prove their manhood, this idea coming from the stories that were told of ancient Germans and how they would prove their manliness by venturing into the wilds alone to kill one of the huge beasts.
A right of passage that would support the idea of Arian superiority and be a PR dream for the Nazi propaganda machine.
These plans would be stopped with the outbreak of war. 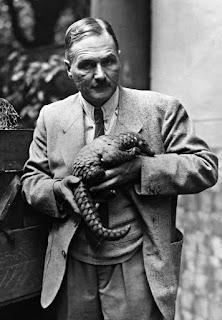 The science Heck was using was flawed. Unlike the book and movies, there was no finding of DNA in an amber-encased mosquito. A method which modern science says is impossible.
readable DNA only lasts up to about 1.5 million years.
Heck wasn't even using genetic editing. he was developing a program of selective breeding. This meant he was not recreating the animals from the past but breeding completely new ones. These animals may resemble older species, but genetically, they are nothing like the real thing.

Heck traveled the globe looking for species he could breed to recreate the aurochs. Many countries, like Canada, gave him animals to help him in his efforts.
He claimed to be successful with many species and moved forward with the park.
The war then came, as we all know it did not go the way Germany had planned, and when allied forces attacked the country their bombs destroyed the zoo and many of the animals Heck had bred.
Those that escaped the zoo killed by starving locals and eaten.
A few did however survive and these nazi bred beasts can be found in zoos today.
As for Heck he survived the war and lived until the 80's ten years shy of seeing what was his dream on the silver screen. 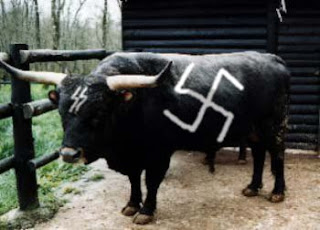 Have you seen a Heck animal in a zoo?
Do you think the Nazis successfully bred any other strange creatures?
let me know your thoughts in the comments below
at August 06, 2018