Klerksdorp Spheres. 'IF' They are an Alien Artifact?

Evidence of ancient lost civilizations or alien contact from long ago or long-lost intelligent creatures whom once called our planet home is hard to come by but have we found the answer deep in the mines of south Africa?

what are the Klerksdorp Spheres? 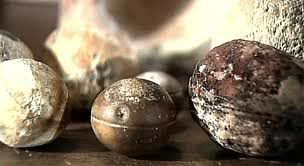 These Tiny mineral spheres are from around three billion years ago.
By all scientific accounts, these small spherical objects can be found in mineral deposits around Ottosdal, South Africa.
This location is home to 3 billion-year-old rocks that were naturally fashioned by carbonate concretions.
The spheres are tiny, sleek metal balls, averaging a few inches in diameter, they have several grooves running around their circumference.
Many make the claim that this is evidence of advanced ancient technology, their claim is that the spheres are so perfect they could only have been made by technology that would not exist according to current historical models.
The spheres vary in color between a blueish tint to variable hues of red.
The tiny mineral spheres are normally between 5 and 10 cm, with even angular groves around the ball which are set at a uniform distance.
But their most impressive feature is that, according to some, they could not be manufactured on Earth, but rather could only be made in space.
This makes many believe that these objects have an extraterrestrial origin, or are possibly an artifact from an alien visitation of our planet.
There has been much research carried out on this little balls of mystery Paul. V. Heinrich, Geologist and Archaeologist at Louisiana State University, and his team of Geologist searching for answers, a claim that NASA has even researched the origin and concluded that they could not have been made on this planet. 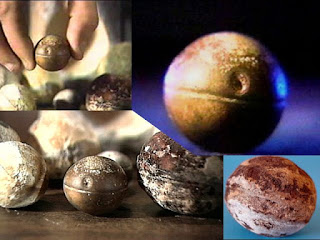 Nasa reporting that the orbs were too perfect to have been crafted in an atmosphere and to achieve the level of geometrical accuracy demonstrated by these balls they would have to have been shaped in zero gravity, This then leads us into the actual shaping as these smooth objects are said to be way harder than steel.
So if they do not have an Earthly origin where could they be from?
Michael Cremo an American researcher and follower of the Vedic texts.Says that they are the last remnants of a prehistoric long extinct advanced culture that once inhabited our world millions or billions of years ago.

This idea plays into the popular ideas of lost civilizations but really, ups the ante.
If there were an advanced group on this planet that many years ago would they have been human?
Were they aliens here exploring the galaxy,?
and that question leads to the idea that these balls are some sort of seeding device. Like the scene from the movie Prometheus when the alien priest empties a vile of black goop into the water thus seeding earth with the first building blocks of DNA.
Could the Klerksdorp Spheres be a similar device, a technological panspermia machine if you will?
Or could they be left over by some other creature that evolved on this planet way back then, the evidence for them being hard to come by due to the vast scales of time involved or maybe they left this planet on their own explorations?
These ideas are very interesting but mainstream science says no!
The spheres are a natural geological formation, simply a wonder of the natural.world.
What do you think these spheres could be?
Do you think they are a relic of an ancient race or alien artifacts?
let me know your thoughts in the comments below.