Ghosts and the Soul

Ghosts and the Soul 'IF' We have Proof?


For most us the thought of a serious accident is terrifying enough.

Some see these accidents as  unfortunate acts of fate, but what if there is a paranormal element to these occurrences?

In this video we take a look at the sightings of apparitions at such accident sites, and ask if spirits, angels, and other supernatural entities have been captured by cameras at the scenes of tragedy. 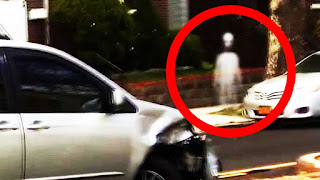 The presence of ghost, spirits, angels, and demons has been reported for as long as we have had the concept and idea of a human soul or spirit.
Manifestations of souls separated from the body have been talked about across countries and cultures for centuries.
Until quite recently "in a historical sense" we have had a lack of proof.
However with the invention of the first cameras it was not long before people began making claims that they had captured a departed soul on film.
The Victorian era was a booming time for these images. It was the golden age of Psyschics, but we can clearly see that most of these pictures were fake.
Today however camera technology has moved on, and images continue to be captured.
Let’s take a look at some the most compelling images and ask “IF”  we have proof for the soul.
The first clip shows a taxi crashing into a tree after 'ghostly attack'
The clip from the middle of a motorway in Singapore shows a ghost standing in the middle of the road.
The unlucky taxi turns a corner,when a large white mist-like figure appears out of nowhere, it  quickly strikes the vehicle.
The vehicle then swerves from the road, crashing into a tree.
Have we witnessed a supernatural assault?
Why would this Taxi be the target for such attack?
Or is this something else?
The video is very strange and I cant think of anything that would behave in the same way this ghostly mist does, well nothing that would force a car from the road.
what do you think it was?
Not all interactions are so violent, often the camera catches an image thought to be the spirit of a victim or possibly an entity that has manifested to protect an accident victim.
A recent image that fits with this idea, recently surfaced at the scene of a fatal road accident in the northern Thai province of Chiang Rai.
An on-scene rescue worker  captured a ghost in this photograph.
The picture was taken at the accident which killed a young woman.
The unfortunate lady had smashed her car into an electrical pole this resulting in her death at the scene.
The man who wqs part of the Rescue Foundation of Chiang Rai, took ten photographs at the scene.
He posted a few of them to his facebook page.
The rescue worker said he then thought no more of the photos, this was until he realized that they had been widely shared.
Then on closer inspection he realized that a spirit could be seen walking away from the accident.
Do these images show the spirt of the deceased lady leaving the scene of her death?
Is this her soul departing for the next life, or is she now going haunt the area of this tradegy?

The picture could only be the start of the story. 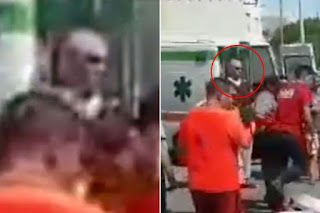 The final images are of something a little different.
This  Eerie figure was seen the scene of  a car crash and has sparked much online debate, claims range from this thing being an alien, a demon or is it another ghost?
A video was captured by a witness at the
aftermath of a collision between a van and a car in the central Argentine province of Rio Negro.
It shows the vehicle flipped over on its side and a man leaning in its open door to talk with the trapped victim.
if you look closely a strange grey figure can be seen standing beside the ambulance door observing the carnage.
what could it be?
Well for this picture there is an answer.
It was ambulance driver Pedro Moguillansky.
The bald man was wearing sunglasses, and  appeared to be a grey alien thanks to a trick of the light affecting the camera of the smartphone that shot the clip.
This was a technological glitch and not something paranormal.
So are the images we mentioned and the others that have been included in this video all down to tricks of the light or faulty camera equipment?
Or have they truly captured images from the supernatural realm?
let me know what you think in the comment below.