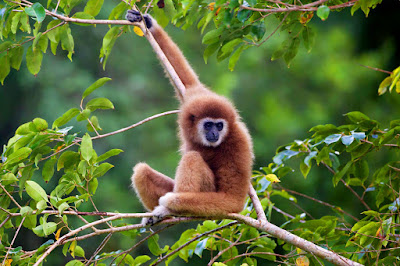 The discovery of new species of animal continues with the recent finding of a new species of primate in China.
I always enjoy these stories, as for those of us that believe in and research the existence of cryptids it can give us renewed hope.
So in this video let’s take a look at this monkey and other ape like cryptids that could be discovered next.


This species of gibbon was rediscovered after it was thought to have been long extinct, remains were found in a 2300 year old tomb showing that these creatures lived until recent history and could well be living today.

This new species was given the name ‘Junzi Imeprialis’ by the British scientist whom discovered it, finding a partially buried skull in the tomb. This tomb was located in the Chinese province of Shaanxi.
The Chinese considered the Gibbon a noble creature and they were often kept as pets by the ruling elite of the country.
This explains why the skull was found in a tomb, the remains were thought to have been buried with Lady Xia the grandmother Qin ShiHuang the emperor whose warriors built the great channel wall.

This discovery could give hope to those in the cryptid community whom are always praying for a new discovery to prove the existence of creatures thought to be mythical.

So what ape like cryptids could be likely to be found next?

We all know about the big three Yeti, Bigfoot, and Yowie, but what others are out there? 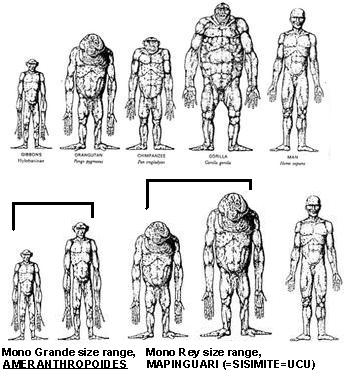 First up is the Agogwe.
The Agogwe is described as a small bipedal human-like creature. Reports of the cryptid coming from the forests of East Africa.
The small ape like creature is said to stand at around 5 ½ feet tall with long arms and  long rust-colored woolly hair.
Oddly it is reported as having yellowish-red skin under this thick wooly-coat.
Other variants of color have been reported with some sightings saying they have seen the animals have black or grey hair.
This ape differs from identified species because of its distinct rounded forehead, small canines and its odd hair coloration and strange skin tone.

The next hominid is more ‘human like’in its appearance and behavior.
The Almas.
Said to be Found Mongolia this "wild man", is  purported to inhabit the Caucasus and Pamir Mountains of Central Asia, and the Altai Mountains of western Mongolia.
The Almas shares many characteristics with its Bigfoot cousin but is thought to be slightly smaller and more human like in intelligence.
Some speculate that it could be a surviving member of an ancient group human, similar to Neanderthals.
There have been many sightings and a few expeditions to find the beast, but all have met with failure thus far. 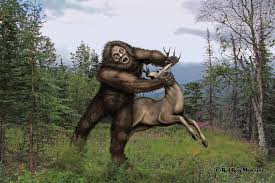 A lesser known cryptid ape comes from the Philippines the Amomongo.
Philippine folklore, tells tale of a creature described as hairy, man-sized and ape-like with long sharp nails.
The people of La Castellana in Negros Occidental refer to the creature as a "wild monkey" that lives in caves near the foot of Mt. Kanlaon.
Interactions with Amomongo do not go well, the creature is said to be vicious and will attack livestock and people that wonder too close to its subterranean home.
Another interesting humanoid from the region comes from the borders of Laos, Vietnam, and Borneo.
The Batutut.
People in the region talk of "forest people", and many groups that have explored these regions have had sightings.
French colonist referred to a animal they had encountered as a wild man.
There were reports of this creature being captured in 1974 but still no hard evidence has come to light.
Footprints are often found and reports still come in with villagers in the area saying these hominids are fact, they are extremely reclusive so gathering hard evidence is very difficult.
This being said many footprints and other anecdotal evidence does exist and this makes me believe this is a good contender to be discovered soon.
However the last species of ape we will look at was said to have been discovered but was then discredited as a hoax.
Many actually still believe the initial discovery was correct and this is a distinct ape species. 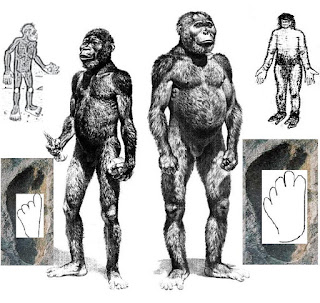 The De Loy’s ape.
This Ape was classified by science and given the name Ateles loysi.
A Swiss explorer discovered the large primate in South America.
He supplied only one photograph as evidence for the ape and this led many to believe it to be hoax.
Today many believe it to be the misidentification of a spider monkey with some photographic manipulation to make the animal appear larger.
Do you think any of these cryptids will discovered?
Which would you most like to see found?
What other ape like or humanoid cryptids are you interested in?
Let me know in the comments below.
at July 02, 2018