The internet has exploded with people claiming to be time travelers and visitors from parallel or alternate time-lines.
We have had the discovery of a strange Nazi coin, the woman claiming to have bought photos from the year 3800 and others.
In a recent article from notfromearth.com
We see the world of time travel merging with the world of aliens and ufology.
А self-proclaimed time traveler recently came into the public eye with some sensational announcements about humanity and the future alliance with extraterrestrials. 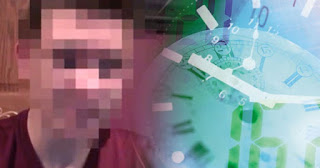 So let’s fire up our flux capacitor and hit that gas we need to make to 88 mph and the year 2030.
This is where we can catch up with Noah the man claiming to be from this future and he has some important information for us.
The time slider appeared on ‘Apex TV’ and was prepared to answer as many questions as he could regarding the future.
He did however have to keep some answers to himself to avoid any time paradoxes from occurring, although watching him slowly fade from existence would make for some pretty compelling proof!
The interview covered many of the normal topics, disasters we could avoid, technologies we can look forward to but it also strayed into unfamiliar territory of the UFO phenomena.
Noah says that 2030 is the year we make contact “well at least officially” with E.T. This is the date that the human paradigm of being the only intelligent species in the cosmos gets shattered.
He added this was however a great moment as we would unite with are new interstellar friends and the things would be rosy.
Answering a question from an interested party he says.
“Yeah they are, so the aliens are practically allies with the whole world except some religions that they must be dealt with and everything. America is allied with them.”
There was then a request from another member of public asking Noah to tell them about the UFO’s construction specifically the interior of these craft.
Noah claims that he did not remember much about the ship only having been in one once.
This was with friends where they kind of fooled around move the ship a little and then left, an experience similar to today’s kids fooling with their parents car. 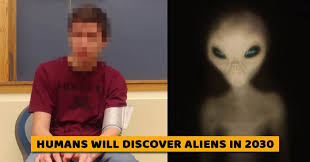 Noah claims that he came to our world from a future not so far away from our own.
He says he came from the year 2030.
And that Noah’s world is not that different from our own, according to him!
The time traveler may have been smart to visit this time, maybe he saw how popular his videos would become racking a large number of views on YouTube and other media platforms.
Seeing his success, he came back to insure it happen guaranteeing his future or past internet stardom….
oooppsss did we just hit one of them pesky time paradoxes?
Noah would say that his arrival in 2018 is nothing but accident he and his friends were fooling around and he was transported to the here and now.
These guys have a great life, messing with UFO’s and jumping through time, teenage high jinx certainly has upped its game in the future.
Speaking of his journey He went on to describe how this group ended in a government facility, which of course was secret.
They did however, although him to first change into a special time traveling uniform, and then step into a giant electric dome and be shot to the year 2018.
Very John Connor!!
But let’s get back to some of his prediction for the year 2030.
He told us that we would see another U.S president of color, and a women to boot.
The granddaughter of Martin Luther King, Yolanda Renee King would be elected to the presidency in the year 2030, she will then lead the nation in a time of war but we shouldn’t worry too much the conflict will not global.
So it would seem U.S policy doesn’t change much either in the future.
Some of the technologies he mentions are not that outlandish, in fact we have them today, with the obvious exception of time travel.
Or maybe not depending, on the websites you visit.
He mentions electric cars the prevalence of VR technologies and a path of technological development we can map today.
It seems the future is going to be a pretty cool place. It does sound very much like the world of Futurama and something to look forward to.
That is if you believe Noah.
Do you think this guy has taken a little trip through time?
Would you like to time travel?
What do you think our holds, will it be VR, environmentalism and E.T or a dark apocalyptic land of the machines?
Let me know in the comment below.