Ancient Gods 'IF' The Lion Men are More than Myth?


The history of humanity is filled with strange sub-species of hominid and long lost missing links.

It would seem that the human form has existed in many shapes and forms over the millions of years we have been walking this planet.

From recent discoveries like the Denisova hominin and Homo floresiensis it would seem that there are many discoveries still to be made.

Could a group of human animal hybrids have been real?

Did these ancient ancestors roam the ancient plains? 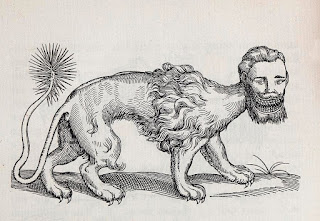 Lion iconography has been found across many cultures and in many countries
The mixing of man and beast being a common practice in many ancient stories.
The lion imagery is often tied to ideas of royalty. Kings and leaders often carrying an image of a lion on their crest or coat of arms.
In a recent online article Author of The Genesis 6 Conspiracy Gary Wayne – looked at this history and made some very interesting conclusions.
He mentions the bible passage Wisdom 14:6
“This was how it was in ancient times, when a proud race of giants was dying away. The hope of the world escaped on such a boat under your guidance and left the world a new generation to carry on the human race.”
This passage he says has some hidden meaning. Explaining how the Nephilim were prideful beasts filled with hubris.
Hubris a Greek word originally, meaning pride, excessive behavior, dangerous overconfidence, and the refusal to stay within bounds.
He comments on how oddly, a group of lions formed into a social unit are known as a “pride.”
The relationship between “pride of lions” and Nephilim maybe something we should consider.
The Sumerian legend of Urmahlullo tells of a ruthless lion-man race.
These man beasts were fearless warriors who showed no mercy.
Lion-men warriors of ancient Babylon and Akkad possessed lion heads, men’s bodies, bird’s feet and identified with Nergal, The god of the underworld.
There are also the lion-men sculptures found in Germany that unexplainably are also associated with Nergal somehow, even though these cultures are separated by time and distance.
Other cultures like King Hambada of the Cedar forest who is found in the “Epic Of Gilgamesh” had the face and paws of a lion, bull horns, vulture claws, serpents’s tail, and was covered in snake-like scales.
Yet another culture with a similar creature were the Greeks.
The Chimera having a body and head of a lion, a goat’s head on its back, a serpent tail and breathed fire.
And yet more examples with the Mithra of the Zoroastrian cult of Persia and India who was often depicted as a lion-headed god with a snake wrapped around him.
These depictions and forms of man-lions or lion-men can also be found in Gnosticism Nubian beliefs in Apedemak and maybe most famously in Egypt.
The Egyptians made record of lion-men on reliefs in Luxor. They were said to be the offspring of the son of Ra and the powerful Egyptian god of war Ma, “ma” being The Egyptian for lion.
The Egyptian Warrior Goddess Sekhmet was depicted as a lioness-god, the fiercest of warriors, and a terrifying goddess.
She was worshipped as “the destroyer.”
The hieroglyph for Tepi-Aui was a large, slouched lion with its head down. Tepi means “first,” but it can also be translated as “ancestors,”
While Tepi-Aui was also applied as a title for ancestral Egyptian deities.
The lion hieroglyph is very reminiscent of the Sphinx.
The lion and Sphinx were both called Aker, the ancient gods that were said to have fathered the gods worshipped by the Egyptians.
In the “Egyptian Book of the Dead”, a lion-god protected the gateway to the underworld and other heavenly domains.
In the ancient world, guardian leonine sphinxes were placed at temples, pyramids, and tombs all across Eurasia as guardians.
The many cultures across the globe all seem to point to the same idea, that these lion-men were the offspring of powerful gods this origin being much like the Nephlim.
The Nephlim are believed to be the ancestors of giants, a subject we took a look at in another

…linked American Giants. 'IF' The Smithsonian knows the Truth?

So if the idea of giants seems plausible to a large group of people what about the idea of these lion men?
Do you think they are or were a real creature
Or is the Lion just a symbol used to project power and strength?
Why it is the lion is chosen by most as the imagery or icon used to symbolized royalty, on flags, coats of arms?
Why are they known as the “king of beasts?”
Let me know your thoughts in the comments below