Alien Abduction 'IF' This is proof?

Claims of alien abduction are nothing new. For years people have reported being taken by E.T .
Beamed aboard UFO’s and experiment on.
The proof of these abductions has been sparse, there have been some amazing stories and a few recovered implants but nothing that would 100 % prove the phenomena.
The recollection of many of these incidents has also been recovered using hypnosis. A process which also has its flaws. The debunker’s claiming that the recovered memories of abduction are actually implanted during these hypnosis session.
But maybe we finally have proof and of all places it comes from the internet.
Google maps to be specific.
Let’s take a look at the
“Google earth alien abduction” 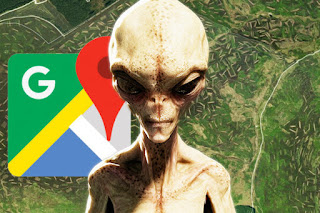 A story recently reported by the website Mysterious things makes the claim that a UK man has found evidence of his experience on the internet, using google earth.
John Mooner a self-proclaimed UFO expert whom is a resident of the sea side town of Torquay, in the UK county of Devon.
Told of his experience.
The man saying this incident was not his first, the man told that he has been the victim of abduction on numerous occasions.
In the year of 2016 he reports that over a twelve month period he had many periods of missing time, alien contact and multiple ufo sightings.
One of these abduction events was captured by the satellites that are used by google earth. 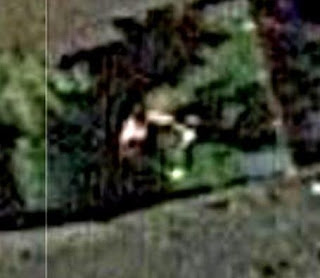 These are the images that show the kerfuffle or so he claims, what do you see?

Mr Mooner reported that he was taken to the moon by the aliens, (I guess he has a name that fits with his abduction story well.)
It also seems the aliens that took him weren’t the usual tractor beaming, weak, spindly bodied E.T’s.
These aliens not only took him against his will but gave him a beat down for good measure.
The man reports missing memories from the incident but unlike most he says this was caused by a punch to the face from one of grey aliens.
This punch resulting in a mild concussion!
THE SATELLITE HAS CAPTURED A REAL ALIEN ABDUCTION TAKING PLACE,” MOONER TOLD LOCAL PRESS. “THE SHOCKING THING ABOUT THIS WAS THAT IT’S ME BEING ABDUCTED BY A GREY ALIEN AND THE SATELLITE IMAGE CLEARLY SHOWS ME TRYING TO FIGHT OFF THE GREY ALIEN BY PUNCHING IT IN THE FACE.”
Mooner said that he discovered these pictures when he began trying to piece together what had happened to him, he felt drawn to the location of his abduction and upon analyzing satellite images he found confirmation.
He says that he can clearly see himself in an altercation with the aliens proving he put up a fight.
Mooner went on to say;
“Looking at the image it appears that the alien has blocked my punch and has grabbed my fist and must have been able to subdue me. The strangest thing about this captured incident is that I do not remember that aliens abducted me.”
The pictures aren’t very clear and do leave much up to the interpretation of the viewer but if you look long enough you may see the details of the man’s target, something that looks like a smaller creature with an elongated head. Could it really be a Grey alien about to take a punch? Or are we being deceived by our eyes and the things we’re conditioned to see?

As strange as Mooner’s story may be he is definitely not alone. The internet has allowed us to see a steady increase in UFO incidents and many detailed reports are published online.
The social stigma that has been associated with UFO sightings and believing in aliens is steadily dissolving.
Is this the result of an increasing number of UFO encounters or because people are beginning to accept the reality of aliens and UFOs?
Skeptics are still the majority and until undeniable evidence is produced, their arguments will remain valid.
Do you believe this man’s story?
Have you found any convincing evidence online?
Have you ever been abducted?
Let me know in the comments below.