'IF' The recently found remains are a real sea monster.

Sea monsters and  lake monster are a main stay of those in search of cryptids.

A creature that looks to me a convincingly strange new species has just washed up on UK shores. 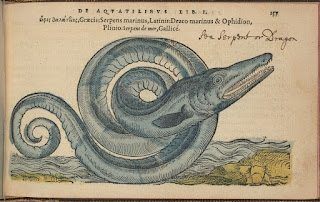 Reported by Devon Life on the morning of May 24 2018 Dog walkers were baffled to find the bizarre remains of creature resembling a crocodile on the North Devon beach.
The report tells of how Beth Jannetta’s discovered of the strange creature along Rhossili Beach in south Wales.
The pictures she snapped and posted online have caused quite the debate.
The women was walking her dogs Roxy, Bella and Bracken along the beach in the morning when she came across the decomposed creature,it had  a long tail and a large head.
She estimated its size to be around one meter in length.
She spoke with the local newspaper saying:
“I was going for a run with my dogs when I came across it. It looked like a well rotted cetacean to me. I put it on Facebook and it caused a big discussion. Other people think it is something different, like a crocodile.”
“It would be very interesting to find out what species it is.”
Dr Dan Forman, of the Swansea Ecology Research Team at Swansea University’s Department of Biosciences, gave his ideas on the creature.
He said that the jawline would suggest that the creature is likely a whale or a dolphin.
Whales and dolphins are reasonably common to the area and many which are dead and decomposed wash in on the local beaches.
The data from the region tells that there seems to be a cluster in the numbers of reported remains washing up on beaches at this time of year in June and July. 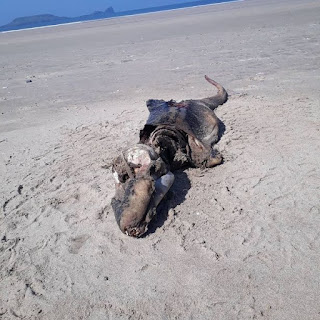 He said that what makes the picture look unusual and something difficult to identify is that the remains are upside down this making the jaw appear thin in places and changing the overall appearance to something that is easily identifiable.
At the first glance you may think it is a crocodile.
He says it most certainly is not.
There is a big bulge on the base of the skull which is characteristic of a cetacean.”
There are many legends of mysterious sea creatures in the area.
Sea monsters of Cornwall and Devon come in a large variety of forms, they have reportedly been sighted many times over the past centuries.
The belief that a giant octopus-like creature plagues the north coast of Cornwall, sea serpents in their various guises.
Most of the sightings, at least those of the modern era, have been attributed to a monster known to the locals as Morgawr.
Morgawr (meaning 'sea giant' in Cornish), is a serpent-like cryptid purported to live in the sea near Falmouth Bay, Cornwall.
First sighted in 1876, various theories have been proposed for the identity of this particular sea serpent, suggestion that the creature is a surviving species of Plesiosaur or that it is a previously 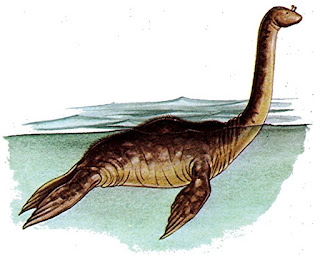 In the absence of a carcass or a living specimen, identity explanations depend only on eyewitness accounts and photographs.
Could these remains be the Morgawr?
A National Trust area ranger, collected the creature from the beach.
They agreed with Dr Dan Forman saying the creature was a porpoise.
The told the newspaper;
“We have porpoises washing up quite regularly, as well as dolphins and seals and sometimes sheep.
Do you think this creature was just an identifiable marine mammal?
Or looking at the picture do you think it was something else and maybe they are trying hide it?