'IF' The Poles are about to flip?

Environmental change is an endless cycle of creation and destruction.


Humanity has witnessed these events and many events have passed into myth and legend.


Stories of great floods and earthquakes echo through the ages.


Are we today at a point of history when a world changing event is once again threatening to sink us into catastrophe, a disaster that will reset our civilization?


A recent anomaly found over the South Atlantic may just be it? 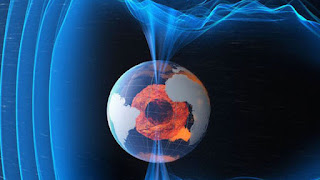 A huge anomaly discovered over the south Atlantic could spell the end, a doomsday scenario for mankind. Scientist have been warning of the effects this strange occurrence could have.
What they are so concerned about is the significant weakening they have found in the earth’s protective magnet shield, and they predict that it’s only going to get worse.
This weakening is said to be part of a pattern of weakening that will last for the next 1,000 years or so.
Why is this such a threat to the planet and in turn us?
The planets magnetic field provides us with a protective barrier from the harmful solar winds and the radiation from space. These can affect all livings on the planet altering the d.n.a of all lifeforms living on Earth.
The idea of a reversal or a flipping of this field has been discussed for many years with a large number of experts giving evidence for their claim. This evidence has been considered weak and was thought to be nothing more than fear mongering.
The talk of pole change causing massive earthquakes, volcanic eruptions, and even crustal displacement on a continental scale, even the extinction of most life was thought to be lacking in hard proof.
But now ‘with this discovery’ there is real hard evidence that this force field could be ready to flip.

This rock is found in the African continent and is known as the African Large Low Shear Velocity Province, the rock itself is extremely dense and sit 1800 miles below the ground.
The geological feature is thought to be tens of millions of years old, existing in between the hot liquid iron of Earth's outer core and the stiffer, cooler mantle, scientist speculate that this somehow generates the planet’s magnetic field.
Monitoring of the region has highlighted the correlation of the growth of this area and the loss of strength in the magnetic field of the Earth.
This loss is seen in the form a hole this hole reaching from Chile to Zimbabwe, this has created an area that has the ability to adversely affect electronic devices.
But before you head for the hills there maybe a little sign of hope.
One study concluded the South Atlantic Anomaly cannot be interpreted as a sign for the beginning of a reversal of the poles, and that when this had occurred in the past it did not result in a pole reversal. After some time the anomalies disappeared. This conclusion based on the research they had carried out
The researchers went on to explain, that the conventional idea of pole reversal starting anywhere in the core is wrong and that the latest findings suggest what happens in the magnetic field is tied to phenomena which happen at special places in the core-mantle boundary.
Do you think there is reason to be worried?
If the Poles do flip do you believe we will see massive natural disasters unfold?
Let me know your thoughts in the comments below.