'IF' We can Find the Source?

The boom is back.

Strange booming sounds have once again been reported.

This phenomenon occurring all over the US and UK

April 15 Liverpool a huge boom was heard in Bootle and the Wirral, with some New Brighton residents saying that their homes shook.

April 22, Southeast Michigan a loud “boom” that sounded, and felt, like an explosion

Explanations for these sounds range from the sonic booms of jets to fracking and thunder storms.

It would seem that today it is harder to pin down a source of these loud sounds.

They have however been heard in the past, this gives us a chance to remove all the sources of modern booms and bizarre loud noises.

There are many legends that tell of sounds from the heavens, let’s take a look and see IF we can find an answer. 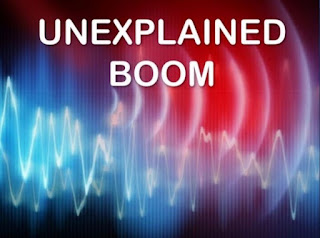 The strange sounds that people hear emanating from the ground and skies come in many forms. There is the Hum, The mystery Booms or sky quakes, strange Ocean sounds and sounds emanating from the Earth.
These noises have been reported for centuries. Probably the most famous story is that of the Trumpets of the seven angels of the apocalypse.
This biblical tale says that when the apocalypse arrives it will be heralded by the sounds of seven trumpets. each trumpet will blow to cue the occurrence of a new event.
These trumpets would proceed disasters that would be world changing, if we take the first trumpet as an example it is said that after it sounds the world will be engulfed in a hail of fire and blood destroying a third of all plant life.
If these Booms that people have heard were the trumpets of the apocalypse I think we would have noticed the following destruction.
I am going to rule them out for now. 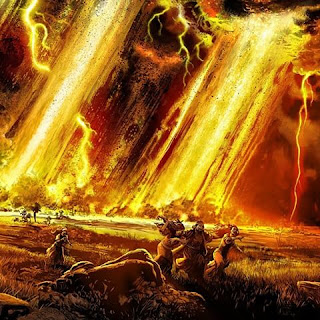 Let take a closer look at the UK and a legend called “the seven whistlers”. Strange that it is seven, the same number as ‘the horns of the end of times’?
This legend goes all the way back to 1853 when newspapers reported that miners were refusing to enter the mines after hearing strange sounds.
These sounds were said to be a warning sign, the miners convinced that something bad was going to happen and people would lose their lives.
Local folklore says these sounds are “Gabriel’s Hounds”. The angel Gabriel hunting the spirits of the dead unsaved.
The angel Gabriel riding a snorting black horse leading a supernatural pack large black dogs with eyes which “flamed with fire”.
The sounds of this paranormal hunting pack came in the form of loud peculiar whistling’s or yelping’s and would often occur after nightfall and just before dawn during the winter months.
Over the years many have attempted to give rational explanations for the sounds but no conclusive answer has been found.
The other convincing part of this legend is that these sounds have been heard before tragedy struck.
The seven whistles were heard before the violent Miners strikes of 1874 in which three were killed and many more injured.
To this day many fear the sounds of the seven whistlers and believe it to be an omen of bad times ahead, death and catastrophe.
The last two mysterious sounds are ‘The Bloop’ and ‘The Hum’.
The Bloop was and underwater anomalous sound that happened in 1997 and had many mystified as to what it could be.
An ultra-low frequency sound was heard at underwater listening stations over 5,000km apart, and one of many mysterious noises picked up by the National Oceanic and Atmospheric Administration (NOAA).
This began the wild speculation of what could produce such a noise, many believed it to be a super large underwater creature something which lives in the deepest regions of the oceans and is never seen and rarely heard.
Some think the mystery was solved and the sound is nothing more than the echoes and reverberation of ice breaking up and cracking, this is a dominant source of natural sound in the southern ocean.
Still many hold onto the idea that this was a noise made by living creature and site recent discoveries of new species of whale and fish in our oceans as examples of how little we know about the sea and its creatures. 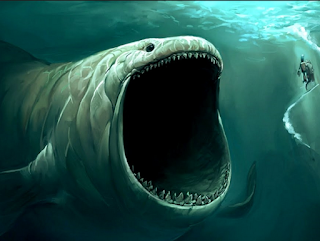 The Hum is a low frequency noise that many have reported hearing since the 1990’s its described as the sound of idling engine, the sound can come and go and sometimes for extended periods of time.
The incessant noise becoming life altering to those that hear it.
It has been heard in many locations around the world from the sleepy villages of south west England to the mean streets of Detroit.
In each reported case of The Hum, a different explanation has been given.
The answer to what creates the sound is normally pinned to a local source, usually some kind of factory or industrial complex.
Some of the stranger reasons given for this sound have included toadfish and mass auditory hallucination.
Whatever you believe to be the causes of these sounds it would seem that researchers are still unsure of what causes the mysterious “humming” noise heard by many people, and the USGS still has yet to identify a cause for “skyquakes” the loud booms regularly reported by many.
What do you think these sounds could be?
Do you think they are a warning sign?
Have you heard these sounds yourself?
Let me know in the comments below