Sumatran Tiger 'IF' It was a shape shifter ?

Images of a dead Sumatran tiger killed in a village in the northeastern region of Indonesia have been doing the rounds online.


The saddening picture shows the critically endangered big cat strapped to wooden board above a crowd of villagers.


There are thought to be only 4 to 5 hundred of this species left in the wild.


The animal is protected with stiff punishments for those that kill them.


These villagers however have a different take, they say the animal they killed was no ordinary tiger.


They claim this creature was “siluman” a shape shifter.


In this video we ask if this “siluman” was a weretiger of legend. 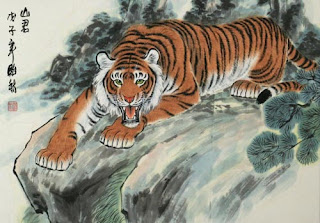 Weretigers are a common story in the Asian regions, the belief that people can be changed into a tiger by magical curses or vengeful spirits is common.
This belief does have some regional differences, in Thailand for example it is believed that the Weretigers are Beautiful woman whom are very skilled in black arts.

Like European werewolf folklore these women await a full moon, this is when they go on the hunt.

During the night she searches for a man to lay with, when she has found her lover/ victim and after she has had her wicked way with the unsuspecting man.
She transforms into her tiger form and proceeds to eat the unlucky fellow.
This transformation does have a crucial difference to that of the werewolf, as not only can humans change to become animals, but animals can change to become human.

Another group of people said to be at risk of becoming Weretigers are hunters and poachers.

Those that have killed a tiger will be hunted by the animals’ sprit, when the spirit or spirits of the dead tigers find the hunters they possess their body transforming them into a tiger.
A fitting act of revenge.

The last and maybe most cunning of theses Weretigers is the seua saming, this creature is said to change its form, it does this in order to tempt people into a trap.

It is said to appear in three forms, the first a beautiful girl naked bathing in a river, the second a crying baby lost in the wilds and finally a peaceful monk sitting and meditating under a tree.
When someone approaches one of these three disguised forms the animal quickly reverts back to its tiger body and pounces on its victim.

In china the shapeshifting creature is believed to be a family curse, the ability to change into the beast being handed down through the generations. This happens when a family has been cursed by a magician, and talking of magicians the Chinese, Malay and Indonesians also believe that these magical men can transform themselves at will.
This is once their magical powers have become strong enough after many years of practice.
The passing of this curse through generations has given rise to the idea that there are many of these Weretigers.
In fact there are so many, whole villages can be made up of generations of Weretiger.
They are said to be private and rarely interact with the outside world.

The belief in animal forms, totems and spirits is common to local religions were animism was practiced long before the arrival of the Hindu and Buddhist religions.
These beliefs could be a cultural memory of the mixing of these old and new religions, this as the ideas of Hinduism and Buddhism spread much like the mixing of pagan and Christian beliefs in Europe.
This is reflected in local legend.
It’s thought that many groups of people have an animal form but they choose to hide it.
The Han Chinese are said to be ‘wereanimals’ hiding in human form, the Tibetans and Na-hsi from the Yunnan province are said to be the descendants of tigers.

So how can we distinguish these Weretigers from real tigers?
There is a simple test, Weretigers have five toes on each of their paws whereas a real tiger has four.

Let’s get back to Indonesia.
Weretigers are thought to not be violent, something very different from their werewolf cousins, the only time they become aggressive is when they are hungry. 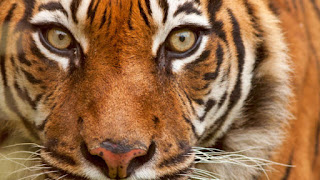 This may come from the idea that the Weretiger is a person with an ability that anyone can achieve through magic or meditation this makes them non-hostile to man.
In fact they may provide a service, guarding villages and farms from intruders and to show gratitude and respect they should be kept well fed.
It would seem that these Indonesian villagers forgot their own beliefs when they killed this tiger.
Fearing this creature, they followed it to a villagers stilt house. when the tiger slept the villagers attacked.
Spearing the animal in its abdomen several times until dead.
The carcass was then hung for all to see.
It would seem that the folklore that tells of respecting and feeding the tiger as it may really be a man was forgotten.
This story does have a monster, one that attacks out of fear and without thought, man.
Have you ever heard of these Weretigers?
Do you think that this tiger was indeed a shapeshifter?
What other shapeshifting cryptids would you like to see a video about?
Let me know in the comments below.