Sheepsquatch 'IF' this cryptid is a cousin of Bigfoot 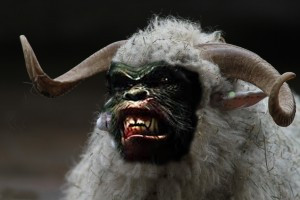 Bigfoot is probably the most famous cryptid in the world. Most people are familiar with the hairy giant and his cousins found around the globe.

There is however a Bigfoot type that is not so well known and has some very unique characteristics.

In this video we take a look at the Sheepsquatch.

The sightings of a bizarre animal began being reported in the countryside of West Virginia during the 1990’s.
These sightings were centered in the areas of Boone, Kanawha, Putnam, and Mason counties.
The earliest report can be traced back to West Virginia's TNT area in 1994, if the TNT area sounds familiar that is because this location was of great significance in another cryptid case from the 1960’s. The Mothman.

There is more information on the Mothman in another video, click the link above to see it.

The reports state that witnesses saw a large creature lumbering its way through the local forest. A group of women were driving along the road parallel to the wood when they were shocked to see a something they found hard to explain.
Standing at a height of between 7 and 8 feet, was some kind of strange beast. Covered head to toe in very long shaggy white hair with a head which was reported as being elongated with a distinct sheep like snout and ram like horns.
The shocked ladies got a clear look at the animal as the headlights of their car illuminated the cryptid and searing its image into their memories. 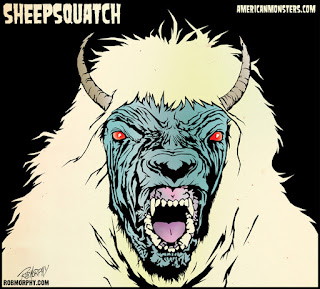 sightings continued when a former Naval man spotting Sheepsquatch, the man had been investigating  a recent spate of UFO sighting in the local area and while he was travelling along the bank of a creek north of Bethel Church Road in Mason County, The scary hairy white monster came crashing from the brush. The giant appearing in front of him and scaring the man half to death.

The man stood silently in fear, he watched the creature walk-on all fours toward a pond and take drink. He noticed that the matted white fur gave off the foul odor of Sulphur and that the fore limbs seemed to have hands in place of paws.
These hands had long fingers tipped with sharp claws.
After a few minutes the animal had its fill of water and moved on, the man then taking the opportunity to return to the safety of his vehicle.

The appearance of the monster continued into the following year of 1995, a report was made of a couple whom were attacked in their car.
This incident occurred after they had stopped at what they thought was an injured animal on the side of the highway.
This animal rose up and slashed at the car with its large claws, the couple then caught glimpse of its strange head. The animal revealing its horned, four-eyed head. The report tells of a large white creature which was comparable to a bear in its size.
Evidence continued for many years, strange tracks being found broken tree branches and strange shrill cries echoed from the forest.
This until the next sighting was reported to the authorities this sighting of the Sheepsquatch came in 1999.
A group of campers had decided to pitch tents in a clearing in the wood, whilst they were setting camp the massive animal burst from the cover unleashing an unholy scream and swiping at them.
The campers obviously ran for their lives when they looked back they could see the Sheepsquatch tearing the camp to pieces.

Sighting of the beast continued into the 2000’s with reports coming in from hunters, campers and outdoors people in the area.

2013 was the year the creature confronted a group of hunters, the Sheepsquatch startled the men as they tracked game. They reacted quickly firing off a number of shots at the creature.
These shot were said to have had little to no effect on the creature. The men turned and high tailed out of the wood. The Sheepsquatch was then seen again in 2015 when once again a camper reported the nine foot tall animal with its white hair and long claws attacking a pile of stacked lumber, maybe attempting to get at a food source hidden in the woodpile.
The animal spotted the witness and began to chase him toward the camp site.
A river blocked the path which the squatch looked for a way around, after it could not finding a way to circumnavigate the water it waded in.
Emerging from the water the beast was reported as resembling an extremely large dog but was walking on its two hind legs and its hair again was said to long white and matted.
Strangely this encounter came to an end when a loud shriek emanated from the forest. This seemingly startled and scared the creature resulting in the Sheepsquatch whimpering its way back into the woodland.
This is indeed an extremely strange cryptid spotted by a good number of witnesses and I cannot think of any explanation.
What do you think these witnesses saw?
Could this Sheepsquatch be a relative of Bigfoot?
Do you know of any more sightings of this strange beast?
Let me know in the comments below.