Project Blue Beam 'IF' The threat of war is cover for an alien invasion?


The threat of war is cover for an alien invasion?

The world is teetering on the edge of war, Russia and the West are becoming more and more vocal in their threats.

Is this fear of imminent military action fact or theater?

The conflict created to distract the public from a larger and more terrifying fate.

A threat not just too nations, but to the entire planet.

Is this war of words created to hide the fact that an alien invasion is upon us? 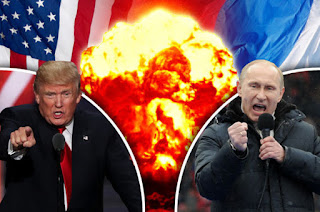 The idea of alien invasion has been played out in countless numbers of books and videos but could we see the scenario now coming to pass.
Recent theories have arisen that claim the U.S is planning to stage a fake alien invasion.
The government working in conjunction with NASA and other agencies, this with the compliance of mainstream media outlets will enable them to enact a project that has been years in the making.


“Strictly speaking, the militarists and war-mongers, itching to ‘kick some alien butt’ as it was said in the movie Independence Day, may actually only want a pretext to justify their existence and get the world to eventually spend huge sums of money on a perceived if contrived threat from space.” Return of Kings conspiracy website wrote: “As utterly insane as it sounds, it seems possible that the US Government is preparing to try to convince the world that there is an alien invasion about to happen, in the largest ‘false flag’ since 9/11.


“I don’t believe in UFOs or alien lifeforms but I do believe that the media puts on large-scale coordinated shows in conjunction with the government.


“It’s a way to unite the entire country (or world) against a common enemy, while also an excuse for a power grab. And an easy way to steal more money—‘oh, we need vaccines against alien viruses, my friend’s company happens to make them and it will cost $10 billion—but we need it!’.

Tensions are continuing to rise the Russian borders peppered with military forces from the U.S, France Germany, and the U.K.


Could the alien threat be used to defuse tensions and focus all nations on an outside threat?


We can go back to the famous speech made be president Regan. in which he said he wondered how quickly the world would unite if threatened by an alien threat.
This may sound like a fantasy too many, hinting at the desperate state of world affairs.
World leaders hoping for an outside influence, something which is beyond their control to enter the picture and distract from the fact the world is pretty messed up and that this has happened under their governance.

For some this is an idea that cannot, and should not be left to chance. They have crafted scenarios that would simulate an outside threat in the form of an alien invasion.
Going all the way back 1952 the C.I.A have been working with the government’s scientific intelligence director on such a scheme.
Notes sent during this time tell of how the C.I.A routinely worked on UFO cases, this as sightings continued to rise through the cold war.
During their investigations of these UFO’s they found that people had become somewhat preconditioned to accepting the idea of alien invasion, and that this psychology could be used to the advantage of the government.
In a memo it was noted that news of potential alien activity or possible invasion had the potential to spark mass hysteria and panic.
In the paranoia soaked climate of the cold war it was decided that steps should be implemented to identify all enemy aircraft as the Russians could take advantage of the UFO phenomena to attack with the added advantage of creating mass panic and confusion.
This was a situation in which they could seize control, global martial law for a global threat.
The cold war may have passed but today the climate of fear between Russia and the west is once again at the same levels.
Could we be seeing the operational use of a plan devised in the 50’s? 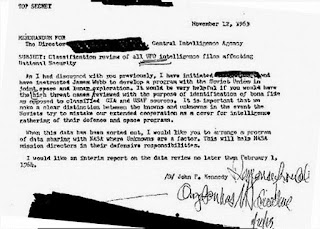 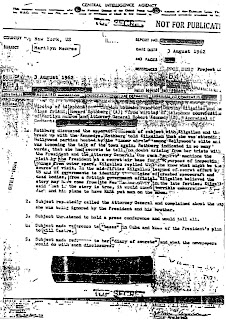 This plan would have needed to evolve and new projects using the old threat may be ready to be implemented.
These will be a lot more sophisticated then say “The war of the worlds “radio broadcast which caused mass panic back in 1938.
Could we see the infamous project blue beam coming into effect?
Project blue beam being the conspiracy theory first given to the world back in 1994 by investigative journalist Serge Monast.
He outlined how a four-step project designed by NASA and the United Nations would allow these organizations to accomplish a New World Order and a global dictatorship.
The four step process reads as follows:
Step 1 the manufacture of natural disasters, earthquakes, flooding and other events created to cause panic and have many turning to religion for answers.
Step 2 an answer from space. This is where we get the name “Blue Beam” as he says satellites will be used to beam holographic images of the figure heads from all of the world’s major religions into the skies above major countries, these images then merge into one, this new image being the one god of all faiths!
This new deity would then begin instructing the peoples of world.
Step 3 the controlling of the worlds populace. Here the New World Order would use Telephonic communication devices sending waves of information into each and every individual mind, convincing them god is speaking directly to them.
Step 4 alien invasion. Various technologies would be used to fool people into thinking that an alien invasion is taking place, thus making it easier for the powers that be to take control of a fear-addled populace.
This may seem a little farfetched but stop and think about each of these steps, have we not seen them occurring over recent years?
They may not be exactly the same as what was laid out in ‘94’ but the world is not the same the place, so plans would need to be tweaked and changed to suite todays social climate.
Let’s take a look at step1, not only have we seen many natural disaster but we have the mother of them all in global warming and climate change.
This threat has been used to implement so many changes and invoke massive amounts legislative change. Those that speak against the science are scorned and silenced, while those that go along with the programs are rewarded with billions of dollars in research grants.
Carbon taxes creating another form of revenue for the governments of the world and new laws regulating everything from rain water to the car you drive keeping Joe public in his place.

Step 2 we know that the technology is out there, and that a holographic image could be projected but I think that is only the means to an end. The goal here is to discredit religion not just one religion but all religion.
Once again we see that happening around the world. Religious terrorism turning people away from religions. Those that won’t turn from their faith then fighting and are killed leaving those without faith. Even in countries which are not gripped by conflict we see the social justice movements and the rise of pc culture demolishing peoples traditional values and ideas. This then creating a society which is of a weaker mind, this priming the population for the next step.
Step 3 mind control. The idea of a device beaming thoughts and voices into our brains may have sounded like the future in 1994 but remember that was an era before the rise of the smartphone and the prevalence of the internet and its social media sites.
Today people are constantly plugged in, the phone has become the device used to influence thoughts and control how we see the world.
Fake news broadcast 24 hours a day 7 days a week 365 days a year creating doubt. The loss of trust in the barrage of information we receive creating the need for a group or person to step in with perceived true answers.
And finally step 4 the alien invasion. This may have begun with the asteroid named Oumuamua. Scientists sowing the idea that this could be an alien probe may be sent to scout the planet or something worse.
The seed has been sown in people’s minds. The asteroid itself has only appeared as a computer rendered image as no actual pictures exist, as it is said to be too far away to photograph.
So we must trust them with this information they are giving us, I refer you back to step 3 and the establishment of trust.

Let me know your thoughts in the comments below.