'IF' Berry Pomeroy is the most haunted castle?

This location is known as one of the most haunted places in the country and maybe the world.

In this video we take a look at Berry Pomeroy Castle. 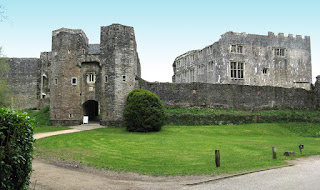 Nestled in the quiet countryside of the English county of Devon are the ruins of a grand stately home and castle.
The ruined walls of this ancient feudal barony hold many secrets lost to history.
These secrets may have been given some proof by recent pictures snapped at the old stately home.
This castle is old enough to be found listed in the doomesday book which was written in 1086 as record used to determine what taxes had been owed during the reign of King Edward the Confessor.
The Seymour family called Berry Pomeroy home - Edward Seymour purchasing the castle from the Pomeroy family in 1547.
The Seymour’s had a significant influence on the politics of Tudor England and Jane Seymour was the third wife of Henry VIII and the mother of his son, who later become King Edward the VI.
As you can imagine a place with such history, has become a hub for the supernatural.
People have reported seeing many an apparition and hearing odd noises when visiting what has now become a tourist attraction in the region.
Witnesses have seen what is known as ‘the Ghostly Guard’
This restless spirit is said to patrol the ramparts as well as watching people from the broken out windows of the ruins.
It has also been said that the guard likes to follow castle visitors, those that have encountered the ghostly guard saying that they could hear his footsteps behind them.
When they turn to see who is following they see nothing!
This guard maybe a harmless spirit who merely follows people but for the next specter it is said not to be the case. 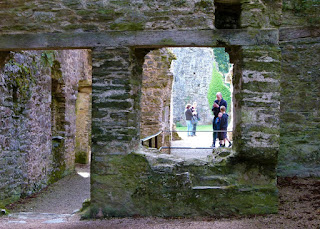 The white lady is considered an omen of death, something quite unique to this ghost is the range she is said to appear in.
Not only can she be seen within the castle walls she also stalks the surrounding land. Those that have reported an interaction with the white lady often falling victim to accidents or illness.
Speculation on the specter tells of the Lady Margaret Pomeroy. This beautiful young woman was locked in the tower by her jealous sister. Here she languished until death. Her fate slow and agonizing as she starved, now she wishes to reap her revenge on the unsuspecting visitors of Berry Pomeroy.
Another tragic tale which leads us to our next ghost, is the women in blue.
This spirit wonders the castle and is accompanied by a feeling of loss and sadness, the history of this tragic ghost is that she is said to have been a servant of the house whom fell pregnant with a child sired by her own father. The father smothered the baby and hid the body from his daughter.
Now, she searches her former home in the vain hope of finding her murdered child.
These are just a few of the many ghosts that inhabit Berry Pomeroy.
There are also some more unusual happenings in the idyllic Devon countryside in which the castle sits.
The castle itself appears to many driving on the nearby road which runs parallel to the castle.

But, here is the kicker. They do not see a crumbled old building but a dwelling that is as new as the day it was built. Glass in the windows, flags flying and fallen walls standing.
Another strange fact is that 80% of all sightings at the haunted castle occur during daylight hours.
Many people see men, women and children in old styles of clothing all around the castle grounds only for them to make a double take and the person to be gone.
These sighting have been happening for decades and the castle features heavily in local folklore but recently the activity at the castle has increased.
Local news reported of a group of friends visiting Berry Pomeroy during the early hours of a weekend morning.
They had been intrigued by the legends and scare factor of the castle.
They took some pictures of their trip and captured these images.
The 19-year-old witness tells the newspaper of how she was left startled to find ghostly images on the pictures she had taken. 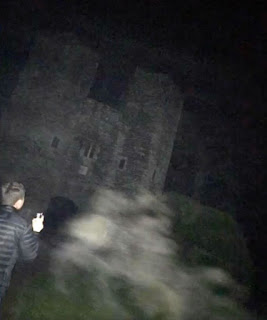 The witness named Chloe told local news
“We went in the early hours of this morning, the image was taken just before 1am.
“I’ve never been there before, we weren’t intending to actually go there but Tyler told us it was meant to be haunted so we thought we would travel there.
“Tyler is the only one who had been there before, so we followed him down.
She went onto to give her ideas on what they had seen.
Saying.
“Lots of people think its horses chasing someone, which I 100 per cent believe too.
“Charlie never believed in ghosts before and I have always been skeptical about it, I didn’t believe it 100 per cent until I saw it for myself.
“This photo is enough to make me believe.”

She went on to tell of how the group walked towards the castle and heard a noise which “sounded like an animal”, they thought that they had perhaps triggered a sensor alarm.
Chloe explained how the group hadn’t intended to find any ghosts or evidence of the paranormal.
She said: “Never in a million years did I think I’d get a photo like this one.
“I took the image just in front of the café shack they have there.
“It’s actually a beautiful castle but just freaky at night."
What could she have heard and snapped?
Going back into the turbulent history of the castle and before it was sold to the Seymour family, it had come under siege.
Legends of the two of the Pomeroy brothers taking their own lives say that as they were chased by enemies, and rather than fall into their hands.
The brothers, dressed in full their armor, rode their horses to the top of the castle ramparts and together leapt to their deaths.

Many visitors claim they have heard screams and noises in that area of the castle which has come to be known as, Pomeroy’s Leap.
Do you think these photos provide proof?
Have you seen or heard anything that proves the existence of ghost and spirits?
Would you be brave enough to stay at the castle IF you had a chance?
Let me know in the comments below.
at April 13, 2018