Weather manipulation has been occurring since the 50’s .The topic is however still hotly debated.


From chemtrails to HAARP both sides have their evidence.


But, is there a weather phenomenon that could prove once and for all there is a Programme to manage, produce and manipulate the weather and climate?


Has there been any evidence which is so undeniable it can prove the claims of those that say our climate is controlled? 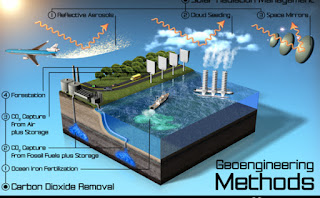 Climate control and weather manipulation is a topic which has been debated for years, the warming climate being blamed on the industrialized world.
This idea of a global warming being the fault of man has its opponents.
They give much evidence to their claim that this is a natural cycle of the global climate, and that extreme weather events are being created to control a worldwide agenda of climate engineering for profit and for war.
The streaks of chemical clouds crossing the skies being the one of the most highlighted forms of evidence.
Those that support man made global warming claim that these trails are nothing more than water and exhaust vapor from the planes.
Contrails which have been seen since the first days of maned flight. 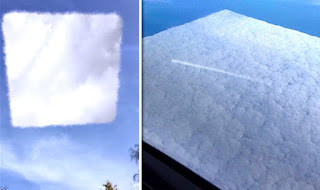 But what if there was a cloud formation that could show it was created by man.
A clearly unnatural formation that would show someone is creating weather.
How about a clouds that form into cubes.
Are these bizarre ‘square clouds’ proof of weather creation using the HAARP project?
Video has come to light that claims to show these strange clouds.
footage was shot in Tuscon Arizona in the USA.
It has sparked online debate many claiming that these images are the hard proof they have been looking for to support the claim the government is manipulating our weather.
The massive formation spans the skies and is indeed very strange.
These clouds having what appears to be a very regular geometrical shape the angles being a perfect 90 degrees.
Were these clouds the work of the infamous High-Frequency Active Auroral Research Programme (HAARP).
The US government has been using this research Center since 1993, and it is run jointly by the US Air Force and US Navy.
The top-secret facility, has been the source of many claims that the armed forces are attempting to weaponize the planets climate and weather.
People say that this base has capabilities ranging from the creation of storms and excess precipitation to earthquakes and scorching heat waves.
Conspiracy theorists are convinced it was really set up to research how to use artificial weather as a weapon against other countries and even how to trigger earthquakes or volcanoes.
The area is now run by a private institution and they say that they carry out routine "analysis of the ionosphere. These investigations researching the potential of developing ionospheric enhancement technology to boost radio communications and surveillance capabilities".
These public communications of an innocent research program have been thought to be a cover story.
Even world leaders think that this facility has a dark agenda.
Venezuelan leader Huge Chavez, even claims HAARP was used to trigger huge tremors, including the 2010 Haiti earthquake.

To get back to the square clouds, the idea that these are created does stem from the shape, many thinking that nature does not create such angles and perfect forms.
The problem here is it does.
There are many examples of nature’s ability to create natural formations that look distinctly man made.
From structures that are used as markers by astronauts like the Eye of the Sahara.
The Eye of the Sahara, a circular shape in the middle of an otherwise featureless desert area.
This symmetrical uplift looking like a huge bulls-eye created by erosion.
Another natural formation once thought to be terraces created by ancient man are the Pamukkale. This Turkish site being a series of basins filled with thermal spring water.
Their white color coming from calcite deposited by the water as it pours over the edges of the pools. That calcite-laden water also creates petrified waterfalls that look frozen in time.
Other Examples of natural geometrical shapes, would be places such as the devils causeway in Ireland or the formation of crystalline rocks.

The question and the proof still remain these clouds it would could be either natural or man-made.
Until we see more concrete proof of HAARPS effects on the planet. Evidence will to be continually gathered by those wishing to prove or disprove their point of view.
What do you think, are these clouds the work of the secretive research facility or are the natural?
Let me know your thoughts in the comments below.