Naga. ‘If’ The Naga is the biggest snake in the world?

Naga are said to be giant snake like creatures, common to Hindu, Buddhist and Jainist beliefs.
These giant serpent like creatures are both a danger and a blessing to those that believe in their existence.
What could they be, and is there any truth to the legends? 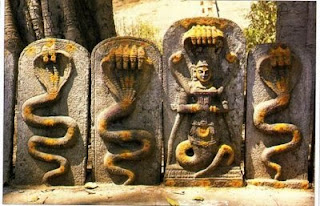 Naga is the Sanskrit word for serpent, and these snakes have been an important part of the three faiths I mentioned.

Images and statues of this creature adorn almost every temple, the stories of the serpents have them being responsible for creating rivers and punishing evil.

Said to live in an underground kingdom known as naga-loka they are very much like the dragons found in other cultures. They surround themselves with gold, jade and precious gems, this treasures are viciously guarded.

Sometimes appearing as a snake and other times seen with a human head and torso and a serpentine body in place of legs. They are a magnificent and terrifying vison.
Legend tells of how Brahma the god of creation banished them to these underground treasure holes as they had become too numerous on earth, commanded only to appear to and bite those that are evil, or die an early death themselves.
The Naga can be divided into various groups
The first are called Shisha, and they are said to accompany Vishnu and aid him in creation.
The Vasuki whom are said to lay at the bottom of the ocean and create tides and currents by undulating their bodies beneath the water, and The Takshaka said to be the leader of all other Naga.

The Naga also take the form of beautiful women, and many Indian rulers of old claimed to be the children of a Naga and human coupling.

The Naga being venerated in these cultures and seen as a god. Therefore these kings were asserting their dominance and right to rule by claiming to be sons of a god.

Sounds like some other religions had the same idea.

So is it only a story from the oldest practiced religion on the planet, or could there be more to it?

Some people have reported seeing these snake gods, what real world explanation could there be?

Nongkhai a small Thai village is the home to Malinee Phisaphan. This old Thai lady had a reported Naga sighting .
She tells tale of how her and a friend were riding through Nongkahi town, this is when the bus they were traveling on drove alongside a bridge.
At this moment the two women saw a huge black snake hiding beneath the bridge.
They report that this serpent was around seventeen feet long, and extremely thick and solidly built.
Its thicknesses being comparable to the size of a football.
Another sighting came from a Buddhist abbot and his monks.
The temple they reside in is built on the location of a much older temple, this older temple had been condemned and was due for demolition making way for the temple that can be found today.
The workers arrived and began the demolition, this is when an extremely large black snake rose up and struck at the men.

The abbot and his monks witnessing the incident, they said they could not give an accurate estimate on the snakes size as the majority of its body was still hidden under the temple.
Most temples are around the size of small house so you can imagine the large proportions this animal would have to fill the space under the building.

As is with Buddhist tradition the abbot and the monks stepped in.
Offerings were made to the reported Naga, and the next morning it had disappeared.

Crossing the border and entering the neighboring country of Cambodia the belief in Naga is just as strong and with more witnesses of the huge snakes.

A villager has the story of being out in the forest gathering plants and fruit when he heard a sound a deep hissing coming from the brush.
He decided to go and investigate and this is when he reports that he saw a snake of massive size.
This snake disappearing into a cave in a rocky out crop. In the man’s mind this creature was way too large to be a python or cobra, both species of snake that he was familiar with.
He was convinced he had seen a fabled Naga.

This part of the world is famous for having many types of large snake, as mentioned the king cobra and the Burmese python are two which grow to huge sizes in the region.
Naga however are reported as being much, much larger.

Are there any snakes that could match the description?

Well they were, and who knows maybe they are still around today.
Titanoboa was the largest snake the world has ever seen.
Longer than a school bus and weighing as much as a small family car this creature dwarfed today’s biggest species the anaconda.
Remains of this massive serpent were discovered in Columbia.
The snake lived and ruled the tropical world some 6 million years after the demise of the dinosaurs.
No doubt a super predator and most likely covered a large range.
This animal needed the hot tropical climate to live and achieve such size, and this is where the Naga crossover could come in.
Maybe these snakes were found over a much larger range and not only inhabited South America but also the Asia pacific region.

This may seem like a leap, but photographs have arisen reporting to show a snake of ginormous proportions traveling up a river in Borneo.
Borneo not being far from the Malaysian peninsular, if found in Borneo it would not be difficult for a snake to make it off the island.

These giant snakes may have been rare and early human sightings of a giant mysterious snake may have gave rise to myth and legend.

This bringing us full circle to the teachings and tales from the Hindu, Buddhist jainists religions.

Could the Naga be a real living and breathing snake?
Is the animal only a cultural symbol a result of the commonality of snakes in the region?
Or is the serpent a creature of the gods and a divine entity?
Let me know your thoughts in the comments below