American Giants. 'IF' The Smithsonian knows the Truth?

American Giants. 'IF' The Smithsonian knows the Truth?

Giants, if the Smithsonian destroyed evidence of monstrous giant skeletons? 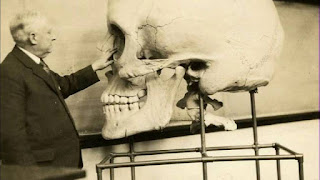 Giants have been with us from the start, myth and legend on the huge humanoids can be found across the world.
They have been talked about by all peoples and have influenced all cultures. We know that gigantism is a natural phenomenon with animals becoming extremely large from the mega fauna of old to today and animals like the blue whale we know that huge size is possible.
We have seen many humans grow to be extremely large, most as a result of medical conditions which effect the pituitary gland.
However a real giant size is thought to be natural gigantism and not medical
So with all these stories where is the evidence?
Many claim we see it all around us ancient giant constructions and enormous burial mounds and artifacts found which seem to large to wielded by your average sized man.
What would prove their existence once and for all would be physical remains and this is what brings us to this videos title and the Smithsonian.
Some say that the institute along with a global cabal have hidden such evidence from the public..
Those that follow this theory say that the Smithsonian Admits to the Destruction of Thousands of Giant Human Skeletons.
There is some actual legitimate historical information that could support the claim (and don’t worry yes we are going to look at that)
But most people today would ask for an explanation as to why so few–if any–specimens of giant humanoids have been found before they signed on to agree that these remains were kept from public view in a clandestine conspiracy of silence.
The skeptics would say it is a simple answer to an incredible question, because no such creatures exist or have ever existed.
There have been many researchers in this field that would disagree and have proposed evidence for giants.
These supporters of the theory point to nineteenth century newspaper articles as proof that these discoveries are indeed being hidden.
Skeptical researcher Jason Colavito, spoke on the mystery of the giant skeletons conspiracies and the Smithsonian Institute.
He suggests that those, that site these articles as evidence are wrong.
This because they are assuming that these old reports are true, when in reality they are nothing more than over exaggerated stories designed to sell newspapers.
He also highlights that the claim that the Smithsonian had the skeletons of giants cannot be found in literature of the nineteenth century.
This being when these giant bones were supposedly consigned to the museum.
When research is carried out one kind find that In fact, as early as 1865 the Smithsonian was publishing on the very subject.
A Smithsonian document of the time attributes “giant” humanoid bones to misidentified mastodon bone.
(A mastodon being an extinct ancient ancestor of the modern elephant.)
Covalito concluded his argument with the statement, “until the rise of the modern creationist and alternative history movements in the middle twentieth century, when suddenly Victorian yellow journalism became proof of biblical truths.”
However, this does not mean that such gigantic remains were never found.

In 1911 one of the strongest cases for a tribe of ancient giants surfaced.
A pair of researchers named Hart and Pugh found preserved remains of giant, red haired humans.
Sunset Cave a location in the Nevada desert hid these remains for years, these caves were a big part of local myth and legend, Stories of giants common to the area.
The remains found by the two researchers were reported to be between 6.5 and just over seven feet in height.
Not exactly the giants of legend but for the time they were certainly on the larger side of average height.
The remains were exhumed and shipped to the Smithsonian Institute by L.L. Loud, an archaeologist with the University of California.
And this where our conspiracy begins.
These remain were listed under the reference number 544, An Anthropological Expedition of 1913.”
Interestingly, Pugh and Hart managed to keep a number of the strange artifacts and bones which they had found, this included several skulls.
The majority of the remains were released to the Smithsonian.
The artifacts recover and held by the researchers can still be seen today at the Humboldt Museum in Winnemucca, Nevada.
The Smithsonian artifacts cannot!
They have seemingly misplaced the skeletons, however other finds are on display in their exhibits.
No giant skeletons to be found on display or in their catalog.
So with records being incomplete can we find any other sources of evidence for giants? 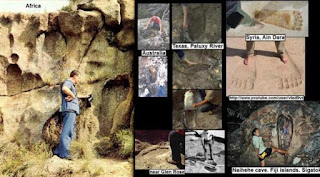 In the Twelfth Annual Report from the Bureau of Ethnology to the Secretary of the Smithsonian, published in 1894, Cyrus Thomas and Thomas Powell of the Bureau of Ethnology wrote about several discoveries reporting that large, seemingly human skeletal remains had been found.
Discovered in Roane County, Tennessee underneath [a] layer of shells and very dark earth in what appeared to be a mix of vegetable mold and soil at a depth of 1 foot.
Resting on the original surface of the ground, a very large skeleton was discovered lying horizontally and stretched out at full length.
The bones were distinct and it was possible to take careful measurement before attempts were made to remove them.
The length of measurement for the skeleton taken from the base of the skull to the bones of the toes was found to be 7 feet 3 inches.
This individual would have been 7½ feet high tall when living.
Another instance occurred and was taken from the same report, and tells of what was found upon excavating an Indian burial mound in Dunlieth, Illinois:
“Near the original surface, 10 or 12 feet from the center, on the lower side, lying at full length on its back, was one of the largest skeletons discovered by the Bureau agents, the length as proved by actual measurement being between 7 and 8 feet. It was clearly traceable, but crumbled to pieces immediately after removal from the hard earth in which it was encased.”
It would seem that more often than not these bones crumble to dust when being removed from their resting place, are there any that survived the excavation process?
How a about A giant human femur found in Ohio in 2011? 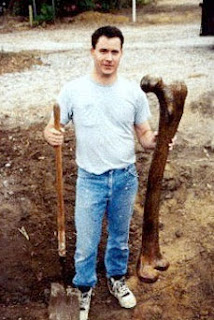 This sadly is another fake.
The image which has been found online since 2008 is the same bone which can be found on display in the Mt. Blanco Fossil Museum.
The museum’s curator and artist Joe Taylor states:

That he sculpted this femur after reading a report featured in a newsletter in which it was reported that a construction engineer found the huge bone along with skeletons of great height.
He was commissioned to sculpt the femur by a college professor whom wished to use it as a teaching aide for his students.
The real bone is unavailable for inspection or research…

It would seem the more you dig the less you find or the more is hidden, the argument for ancient giants still needs that smoking guns piece of evidence to revealed.
What if we look at a more modern discovery could that help us with our decision on giants?
A story told by a soldier who had fought in World War II, tells of how he had had been stationed on the Aleutian island of Shemya.
He was assigned to build an airstrip, and while bulldozing a group of hills in the area, the engineer and his crew unearthed several sedimentary layers of human remains.
It was noted that the remains had an extraordinary long crania and leg bones, apparently belonging to a people of gigantic proportions.
The skulls were said to have measured up to 24 inches from the base to crown, this is far greater length than that of an average human skull.
Also of interest was that each was said to have been trepanned, the strange process of drilling or cutting a hole and removing a top center portion of the skull, thought by some ancient cultures to enable a variety of alleged “benefits”, including psychic abilities.
The existence of those abilities we looked into with these two videos
Telekinesis        and      Telepathy

This story was corroborated by other members of the man’s unit.
The closer for those that believe in the conspiracy, the remains were said to have been gathered by the Smithsonian Institution!
And you have guessed it, there is no record of where they were taken.
With stories like this letting us know that such skeletons may have indeed been found from time to time and the Smithsonian’s poor record keeping skills, it is far from surprising that there is conspiratorial speculation.
Do you think that giants once roamed the earth?
Do think that the evidence is being hidden?
Let me know your thoughts in the comments below

Catch up with the latest @WeareIF