Jurassic park is one of the most popular film franchises in recent years. These movies putting man and dinosaur side by side with terrible consequences.


These stories originating from a book first published by Michael Crichton.


So we have nothing to fear, it’s all just a work of fantasy?


Living dinosaurs have been a consistent belief of those that follow the world of crytptids.


From living pterosaurs to giant spider there’s is a place that has them all, and it’s no fantasy.


In his video we ask IF Papua New Guinea is the real ‘lost world.’ 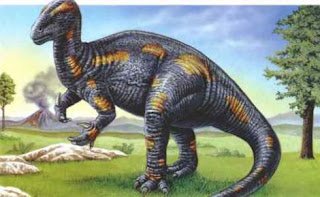 Papua New Guinea is somewhat of a lost world still vastly unexplored, its jungles hold many a mystery.
Local tribes still practice head hunting and rumors of cannibalism persist.
However these natives are not the worst thing on the islands it is said there are many larger things to fear.
The country has a rich cryptid history but unlike many places where the stories of cryptid creatures needs us to accept a creature that has more in common with a creation from a fantasy novel, Papua New Guinea’s cryptids could have leapt from the pages of a history book.

Papua New Guinea’s cryptids seem to have a grounded origins, many being creatures that once existed.
The first living fossil reported in the area is The New Guinean Iguanodon, or Papuan Iguanodon.
This living dinosaur has been seen by many villagers, the first known sighting at Tinganavudu with other sightings occurring near Rabul not far from the nation’s capital of Kokopo.

This creature has been described by witnesses, they say the beast stands around 3 meters tall, has a canine shaped head with a long crocodilian tail. Its skin is said to be reptilian and grey in colour, and it has large round body, one witness comparing it to a 900 liter water tank.

More sighting of the creature give it some distinctly dinosaur characteristics.

The creature was spotted in an area to the west of the island this witness saying the beast was as large as truck again mentioning the big dog like head, a long neck and long tail, the animal was lizard like in appearance.
However it walked on its hind legs. These hind legs were said to be very thick, and elephant like. whereas the front limbs were much smaller and not used for walking.
The animal had large eyes and long sharp teeth protruding from its mouth in the same way the teeth of an alligator do. One very interesting feature was the patterning of its scales, these formed large triangles running down the creatures back.
These description had people comparing this creature with the extinct dinosaur Iguanodon.
This species was very prolific and fossils have been found over much of the planet.
Its theorized lifestyle would also be suited to Papua New Guinea as it is thought that the herbivore preferred marshes and swamps, an environment easily found on the island today.
But it doesn’t stop there, this place has probably more reported dinosaur sightings than any other location on the planet.
Pterosaurs have reportedly been seen soaring in the island skies.
This flying cryptid is known as a Ropen, Duwas, Indava, or Seklo-bali.
The creature matches the appearance of the long extinct flying reptile.
The observation of strange lights in the night sky are said to be the Ropen, this leading some to think they have a kind of bioluminescence.
The purpose of which, is not known.
The native tribes fear these creatures telling tales of how the Ropen will snatch up a man carrying him off to the caves in which they roost and his doom.

These ancient long thought extinct animals are not the only cryptid reptiles said to roam these lands.
There is also Parker's snake.
Described as a serpent measuring over 6 feet in length the snake is said to be highly venomous. The tribe’s people report this animal as having smooth scales with large ventral scales on its underside.
They can be found in fresh water streams and swamps but are said to be extremely rare.
Maybe this is a fresh water species related to The Belcher sea snake, one of the most poisonous animals in our oceans.

Yet another mysterious reptile is a large species of monitor which is said to be semiaquatic and another which is said to be up to 20ft long and live amongst the trees.
Once again we see these animals reflected in fact, with the giant lizard Megalania once inhabiting Australia, a land not far from Papua New Guinea.
These cryptid sightings are not just limited to reptiles or possible dinosaurs, another extinct creature from Australasia is also said to be seen.
The Thylacine or ‘the Tasmanian tiger as it’s more commonly known’ being reported

this along with an unknown type rhino.
Local legends say there is large pig like creature living in the jungles and that this creature has long horn growing from its nose.
There is some evidence as dung heaps and rhino sounds have been heard and seen often by native peoples. 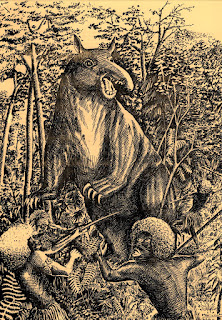 Other pig like creatures are said to stalk the jungles.
The Papuan Devil-Pig or Gazeka, is said to resemble a tapir or giant sloth, having a long, proboscis-like snout, it is said to be very dangerous disemboweling those that are unfortunate to stumble upon this beast.
One idea is that this could be yet another living fossil or a living relative to the giant ground sloth, an animal which are thought to have gone extinct around 9 to 10 thousand years ago.
Others claim it to be a living Diprotodon a species of giant marsupial, related to the wombat, from Australia.
More types of cryptid have been seen in this land that time forgot, giant birds and huge spiders both hunt in the deepest jungles and marshes.

Local legends speak of an eagle so big it is said that they can catch and fly away with a dugong in their claws.
A dugong or sea cow is no small animal, so you can imagine the size this bird would need to be in order to lift such a weight.
And what may be the most terrifying of all, especially for those arachnophobes out there, a spider measuring the size of a family dog.
This spider hiding in a web nest waiting to ambush unsuspecting passersby.

I think we can agree that this country certainly has its share of cryptids, but they have a grounding in real biology.
There is nothing too fantastical about them, especially when we compare them to cryptids such as dragons, fairies or creatures that comprise of elements from many different species.
Could this largely unexplored land still hide creatures yet to be discovered by science?
Could those creatures be animals we thought lost to history?
Let me know your thoughts in the comments below.