Valentines 'IF' you could love a monster?


'IF' you could love a monster?

Valentines a day to celebrate all that is love or wallow in loneliness.
This Romantic holiday has a long history.
Valentines day’s origins can  be traced back to the time Rome, the dates back then were a little different with the festival  Lu/per/calia lasting from February 13th to the 15th.
The romance like the dates was also a little different to what most people are used to today
Men sacrificed a goat and a dog, then whipped women with the hides taken from these dead animals which they had just slain.
The whole event was a mess of sex and drunken nudity.
The men drew the names of women from a jar and they would be …… shall we say joined for the rest of the festival.
This sounds pretty far removed from what we think of as ‘a romantic valentines’ today.
The festival was eventually replaced when 5th century pope Gelasius combined Lupercalia with St. Valentine's Day.
This saint’s day coming from the execution of two men both named Valentine on February 14th in the 3rd century.
This is when the holiday became something we would recognize today with its love hearts and cherubs. 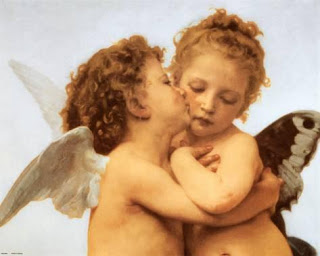 The cherub being the defacto creature we think of when pondering love, these plump little winged babies are in fact angels.
The cherubim are the second highest rank in the angelic hierarchy and thus should be considered very powerful beings.
They may adorn millions of valentine’s cards each year but their image can be seen on churches and they are even reported as the two figures found on top of the arc of covenant.
This because they are considered protectors. They were first charged with the protection of the Garden of Eden
(I guess they didn’t do a great job with that, maybe the Valentines thing is their punishment?)
So far from being the cute, cuddly creatures we think of, the Cherubim are the mighty and powerful guardians of God.
But while we are talking creatures of love and the celebration of Valentines, let’s see if there are any other amorous creatures from outside the realm of Christian beliefs.
We are familiar with the stories we see popularized through film and book “beauty and the beast, the little mermaid and sleeping beauty”
All with a monster that is beaten by the power of love but what creature is out there that uses love to its own nefarious means?
Let’s welcome the Asrai.(ashray) 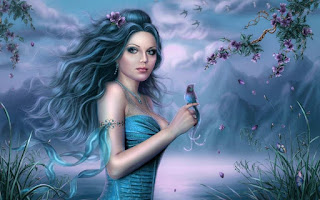 Asrai are described as a species of aquatic fairy but should not be confused with mermaids, they do not have the fish like appearance associated with merfolk.
The Asrai look like beautiful young maidens, and sometimes appear as children.
This is a trick as in reality they can live to be hundreds of years old.
If you stumble across this creature you can inspect its hands and feet to see if you have run into a water fairy, this because they are said to be webbed.
No doubt a specific adaptation for their watery home.
Stories say that if an Asrai is caught in, or even touched by sunlight they will die and melt into the pool of water in which they reside.
Now for the love part.
If an Asrai is seen by a man, her beauty is so great that, according to folklore, the man will instantly wish to capture her.
The irresistible beauty has men falling instantly in love with the creature.
The obsession then leading the demise of the besotted man.
The water nymph luring him with promises of love, gold and jewels.
The man makes his way into the deepest part of the lake and drowns.
If the man does not drown but makes it to the focus of his desire, his troubles are just beginning one touch of or from the Asrai will see your body burned and permanently marked, if he survives he carries the mark for the rest of his life.
This letting everyone know how foolish he was to fall for Asrais tricks.
Another victim of the water fairy and its love trap!
I hope you have a great Valentines
at February 13, 2018