Thunder birds 'IF' the legend is true?

Thunder birds 'IF' the legend is true?

The Thunder bird!!
A quick google search will find you landing on the pages of a vintage puppet show, or tech tips and tricks for managing your email list, to look for this cryptid we need to search a little deeper.
This most elusive cryptid of the America’s is hard to find, said to be a giant eagle-like bird with an incredible strength and size.
These avian terrors have been reported and sighted in much of the Midwest United States.
The Thunderbird has many incarnations and is found in many of the legends told by the first nations tribes.
One such tribe is The Sioux Nation, their tales of this demon bird has the thunder bird called the “Wakinyan Tanka.” 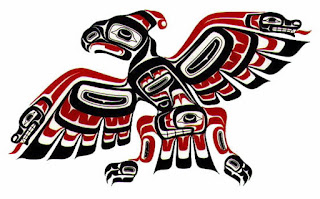 These first nations’ people say that the Thunderbird is far from a mythical monster, they tell of a group of non-physical entities whom live in the regions Black Hills.
These beings wear cloth made from clouds, they are formless but when they appear and take form, each different entity manifest a colour to match the four cardinal points;
Black for the west, yellow for the east, the north represented by red, and the south is white.
The non-corporeal nature of these men like creatures is not where the strangeness ends, they are said to be of huge size and possess wings that have four joints, and they have large hooked beaks filled with sharp pointed teeth and on their feet, enormous talons.
These birdmen are thought to be watchers, overseeing the world making sure it is kept pure and clean.
“Shaman are said to see the Wakinyan in dreams, but only in fleeting glimpses.
The Thunderbird as a whole has reportedly never been seen in its entirety in any vision, so instead is pieced together from the many shamanic dreams and visions that have occurred over the years, and the descriptions have then been passed down through the ages using native oral tradition.
Another tribe has a different take on the creature.
The Yaqui tribe tells of the “Otam Kawi.”
This is a giant bird reported to be living in the hills of Otam Kawi.
This huge raptor is said to fly out in search of food, sometimes carrying men, women, and children away to feast upon in its hilly hide away.
Yaqui people had so much fear of the monster that they would avoid holding ceremonial dances for fear the noise would attract the beastly the bird.
So if these thunderbirds are attracted by noise and commotion as is the case with many other predatory species, there must be some compelling sightings and maybe hard physical evidence?
On July 25, 1977, in the early evening a group of three boys were playing hide-and-seek in a backyard this is  when two giant birds swooped down at them, these aerial behemoths narrowly missed one of the boys,
Travis Goodwin.
Travis ran and hid in a plastic pool in the yard.
The birds circled around and dived in for another attempt, this attack was successful as one of the birds snatched up Marlon Lowe.
The bird held Lowe in its talons, carrying the young boy about three feet from the ground, for a distance of 35 feet. The boy fought and screamed for his life until he broke the birds grip and was free to run for cover.
This attack was witnesses by the Marlon Lowe’s parents and two family friends whom were also present at the time of the attack, the third boy who had been playing with Travis and Marlon also saw the whole event unfold from the safety of his hiding place.
Local police received reports of the incident along with the Illinois Department of Conservation.
The authorities didn’t take the Lowe’s report seriously.
Maybe they should have because as it turns out Illinois has a rich history of giant birds-of-prey.
In 1673 Jacque Marquette and Louis Joliet traveled the area, they made a record in their diaries of an image carved some 50 feet high into a bluff where the Illinois and Mississippi Rivers meet.
This giant image could have been an ancient warning sign left to warn others of the danger of these winged agents of death.
This carving was given the name “Piasa Bird.” 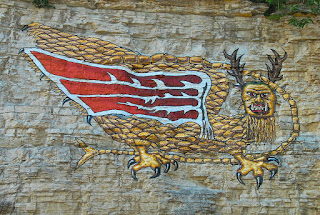 The “Piasa Bird,” according to local tribal legend was a large scaled bird its body was said to have aspects of mammal, bird, reptile, and fish.
The Illini tribe tell tale of living under threat of attack from this creature, that was until chief, Ouatoga, killed the monster with poison arrows.
This was said to have happened long before the area was explored by European settlers.
If we trust that the story could be true we should take into account that most predators have a range or an area to which they lay claim, and often defend said area keeping others of their kind away and securing their source of food.
If these thunder birds are indeed real they would not be numerous, so maybe once the chief had killed this Thunderbird there wasn’t another bird near enough to take its place?
The sightings didn’t stop there.
Numerous reports of giant birds dot the pages of history books through the times of Europe settlement.
Old tin-type photos have appeared online showing men of the old west holding carcasses of thunder birds they shot and killed.
These vary in believably, some are clearly frauds showing what seems to be pterosaurs, an ancient flying dinosaur.
Although some claim that this animal may also survive until present day. Maybe something we should look into at a later date.
Let me know if you would like to see that in the comments.

Back to the thunderbird.
Sightings do still happen today in 2002 A huge bird was spotted in Alaska.
Residents in the villages of Togiak and Manokotak saw a bird the size of a light aircraft,
Reports said the wingspan of this bird was an estimated 14 feet.
One of the most recent sighting was captured during closing stages of US Grand Prix on October 22, 2017.
A shadow of a bird shaped figure soars over the track and it is enormous when compared to the Formula One car below.
So what could this animal be, is there an enormous species of bird flying around mid-western America.
Giant birds have and do exist, and it would seem that the biggest of them are always predatory in nature.
We know of the giant condor, the cassowary and the many species of large eagle found around the world.
In the not too distant past the planet was stalked by terror birds with their T-Rex-like feet, and a hooked beaks that could sever the spinal cord of a horse in a single blow, They were however flightless.  one would think they would be the scariest bird we can imagine.
But no!
There was a large flying predator that matched the reports of thunder birds.
Argentavis. 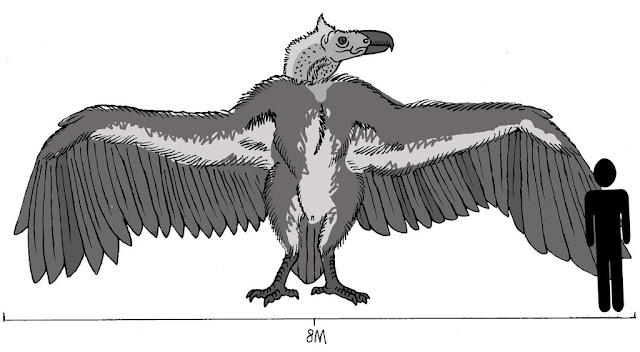 This giant bird was a highly aggressive predator.
Thought to be a territorial creature, an active hunter and scavenger, they scavenged dead bodies over large distances.
This sounds very much like reported thunder bird behavior.
Its appearance also rhymes true with the description of thunder birds over the centuries
They had stout, strong legs and large feet which enabled them to walk with ease. This could account for the comparisons with birdmen made by the Sioux tribes. The manner in which they walked being comparable to that of a man.
Their bill was large, rather slender, and had a hooked tip with a wide gape. This again fits Sioux description.
Argentavis had an estimated wing span of almost twenty feet, the largest flying bird on record, this brings us to the last piece of evidence or coincidence depending on your belief, the name.
Thunderbird got their name as they were often seen at the time before a large storm hit, this could lend credence to the story as large birds would need to follow and ride the drafts to stay in flight, not unlike the way a modern eagle rides mountain up currents today.
Researcher John A. Keel mapped Thunderbird sightings and found that they corresponded chronologically and geographically with storm movement across the United States.
This cyptid seems to be associated with many hard facts could they be out there hiding in the highest most inaccessible parts of the U.S?
What do you think, are Thunderbird's real?
Let me know your thoughts in the comments below
at February 03, 2018