Hollow Moon 'IF' there are aliens on the moon?


Hollow Moon 'IF' there are aliens on the moon?

First it was flat earth, then it was hollow earth, new earth and virtual earth, all theories that claim our planet is not what we have been told.
But what about our nearest celestial Neighbor the moon?
Often ignored when these alternate ideas are discussed, surely if the earth is not what we have been told the moon must not be too?
HOLLOW MOON THEORY. 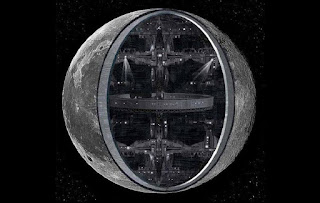 The idea that the moon is not solid body has been around for quite some time. We can go back to the 1970’s when two Russian scientist proposed their theory that moon was in fact a large spacecraft crewed by an advanced alien race.
These aliens used their advanced technology to build the celestial body as an observatory for monitoring the earth or I should say to keep an eye on humanity.
The outward appearance camouflaged to appear to us, as a natural formation while hidden in the interior a community of E.Ts go about their daily business.
One could almost think of them as a space based security team, the moon being a gigantic CCTV base surveilling the globe!
Two scientists named this  “The Spaceship Moon Theory.”
Michael Vasin and Alexander Sh/cherba/kov,first proposed this idea in July of 1970, when they published the paper
“Is the Moon the Creation of Alien Intelligence?”
You’re mind maybe jumping to images of the death star or some other mechanical monster weapon featured in a sci fi book or movie
But Vasin and Shcherbakov’s thesis was a little more practical in an engineering sense.
The idea of alien constructions crews zipping around in near earth orbit building a huge structure like the moon, all without being seen is unbelievable.
Instead they say that the Moon is a hollowed-out planetoid.
The unknown beings used technology far superior to any construction machinery we find here on earth.
Melting the rock of the inner moon to create large cavities in which they build their base of operations.
The claim is we can see marks from this construction method on the moon’s surface a result of molten lava spewing out onto the face of the moon.
This implies the Moon has been altered to have an inner hull and an outer shell thought to be consisting of metallic rock.
The earths satellite now being something engineered and not natural.
Other evidence of the moon not fitting with natural explanation is said to come in the form of large lunar craters.
Main stream astronomy tells us that these were formed by meteor impact, the hollow moon thesis says ‘no’ this because they are too shallow with flat or even convex bottoms.
They use the comparison with the smaller craters, which have a depth that is proportional to their diameter.
Using the same measure the large craters should have a far greater depth but they do not?
They are not saying that the craters are fake but that the smaller craters are formed in a more natural way as meteors of a lesser size impact and leave an accurate impact site, a true fingerprint of the collision if you will. 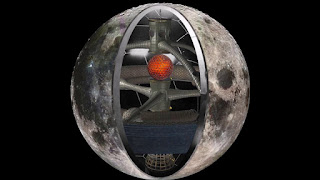 Whereas the larger meteors are impacting with a lot more energy they drill through a five mile rocky layer until they hit the high-tensile metal “hull” underneath.
This hull creating a depth limit to the large craters and providing evidence that the moon has been altered and reinforced to withstand these impacts.
More claimed evidence of this construction comes from materials recovered from the lunar surface.
The moon’s surface comprises of different elements from the surface of the Earth.
Chromium, titanium and zirconium are all found in concentration.
The two scientist believe that the moon comprises of a rocky outer layer, this outer layer is thought to be 20 miles thick.
This provides a covering, while a strong metallic hull that perhaps houses an atmosphere lays beneath.
Artifacts are said to have been photographed and retrieved.
According to George H Leonard and his book[dw1]  “Someone else is on the Moon.”
We have a good quantity of evidence proving the moon is home to an alien race.
The concluding piece of evidence for many is the idea that this is the reason we have not returned to the moon since 1972.
The discovery of these ‘watchers” putting an end to maned visits to the moon.
Others have the opposite idea and say we are now working with these aliens, and the moon has become a place where both species, human and alien, are developing technologies and experimenting on one another.
An alliance founded in science.
Others believe that it has become a military stronghold and a defensive structure protecting us from threats that may come from beyond our solar system.

What do you think, is the Moon hollow?
Are we being surveilled by an advanced alien race and if so to what ends?
Do you think that all astral bodies are hollow and both the moon and the earth have an empty inner core?
If you do catch the video on hollow earth linked in the corner.
Let me know your thoughts and idea in the comments below
Catch up with the latest @WeareIF
at February 16, 2018