Demon Spotted "IF" the Arizona creature can be identified?

Demon Spotted "IF" the Arizona creature can be identified? 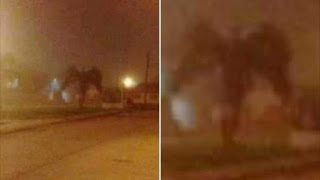 This image has been viewed over 100,000 times as of the time of making this video and looks like it probably be 100,000 more.
First appearing on a Facebook post by an Arizonan resident, the picture shows what some think is a huge winged demon.
Many say that on closer inspection a man can be seen kneeling at the feet of the beast.
According to the witness once this picture was snapped the beast just walked away.
Many have claimed that this sighting is a sign that the end times are upon us.
Others that it is nothing more than hoax.
Winged humanoid figures have played a huge part in human history, stories of angels and demons have both entities sporting huge wings.
The angels having wings with a bird like appearance whereas demons have wings similar to those of a bat.
There are however other cryptids that could match the description of this image.
The first that springs to mind would be the mothman or I should say mothmen as sightings of these creatures span the globe.
Said to be a large grey creature with glowing red eyes and a 10 foot wingspan the most famous sighting took place in Point pleasant in 1966.
This appearance said to be connected to a devastating bridge collapse that occurred after the creature had been reported in the area.
Mothmen are not only found in the US some of the earliest reports can be found traced back to the UK where a creature matching the mothman was seen on multiple occasions over the years.
In the UK it is known as the owl man.
In 1976 witnesses reported seeing the cryptid they said.
“It was like a big owl with pointed ears, as big as a man. The eyes were red and glowing. At first I thought that it was someone dressed-up, playing a joke, trying to scare us. I laughed at it. We both did. Then it went up in the air and we both screamed. When it went up you could see its feet were like pincers!”
Could this picture be of a mothman or something else?
There are winged humans across all cultures could this be a picture of something from outside European folklore?
How about a Manananggal? 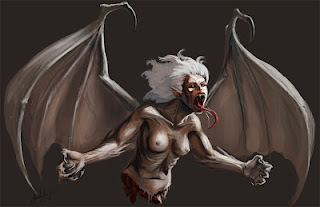 This beast is more commonly referred to as a tik-tik.
Originating in the Philippines this creature is winged humanoid but with some unique abilities.
It can detach its upper body from its lower body and in the day light, takes the form of a beautiful woman.
When night falls, it retreats to a hiding spot to and begins its ritual and transforms into a hideous, vampire-like hunter.
Its body grows a pair of enormous bat-like wings, very sharp teeth and a dreadfully long sharp tongue. In the process, it produces this very tiny shrieking sound repeatedly. Then it separates itself from its lower body and flies to the air to begin hunting for its prey, leaving its legs and the bottom half of its torso on the ground.
So maybe this monster is not the answer it would most likely leave a body count in its wake.
Maybe it’s from a Middle Eastern culture?
Jinn, jann or djinn are supernatural creatures of Islamic mythology but are also found in pre-Islamic Arabian mythology.
They are often mentioned in the Quran and other Islamic texts and reside in an unseen world, another universe beyond our known universe.
The Quran says that the jinn are made of a smokeless and “scorching fire”,
But are also physical in nature, being able to interact in a tactile manner with people and objects and likewise be acted upon
The Quran tells tale of how Allaah created many different types of jinn.
These Jinn have the ability to take on different forms, such as dogs and snakes; some are said to have wings.
Islamic teachings say
The jinn are of three types: a types that has wings, and they fly through the air
a type that looks like snakes and dogs;
And a type that stops for a rest then resumes its journey.”
Could this image be that of the Jinn?
Maybe it’s something else, let me know what you think it could be in the comments below and if you think this is a sign of an apocalypse make sure you share the video as a warning
Catch up with the latest @WeareIF
at February 20, 2018