Water 'IF' its a human right?


Water 'IF' its a human right?

Water is essential to all life on the planet, access to clean drinking is a basic human right and sadly in many parts of the world a right many still do not have.
As we look to the poorer countries and help them secure this basic need have we taken our eye off the ball at home?
First world nations do not give much thought to water unless there is a problem, pollution or drought bringing the issue to the forefront of people’s minds.
But are we slowing losing this right and not to accidents or climate change but to big business, is there a plan to privatize water? 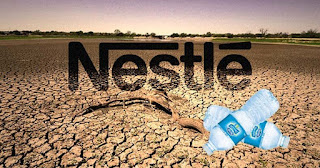 The current Chairman and former chief executive officer of Nestlé, the biggest producer of food products on the planet, believes that the solution to the world’s water problems is privatization.
This plan coming from the company that has introduced junk food to the peoples of the Amazon, invests massive amounts of cash to stop the labeling of GMO- produce.
And has a cyber army at its disposal to crush criticism and discussions on the internet.

This is the multinational monster we are meant to trust to manage our water, this group having a documented history of creating shortages:

These Giant international companies are given water-well privileges and tax breaks, this often over an area’s population rights all because they are said to produce jobs.
Next time they’re thirsty let them try drinking a job!
Firms like Coca Cola and Nestlé suck up millions of gallons of water, the water they use to produce the sugary soft drinks leading to shortages in the area.
Even with this being common knowledge Company Chairman, Peter Brabeck-Letmathe, believes that “access to water isn't a public right.”
He also stated that it’s not an individual's right.
He wants privatization!
Is this a man and corporation worthy of our trust with something that is so essential to all life?

This is beyond money, this is power!
We could be giving up our humanity.
The access to water allows us to build our cities and towns grow our food and many other things, is this a level of control we want to give to a company with a less than ethical history?

Here is one example of this company’s regard for the general public
In the small Pakistani community of Bhati Dilwan, a former village councilor says children are being sickened by filthy water. Who’s to blame? He says it’s bottled water-maker Nestlé, which dug a deep well that is depriving locals of potable water. “The water is not only very dirty, but the water level sank from 100 to 300 to 400 feet,” Dilwan says
Why?
Because if the community had H2O piped in, it might deprive Nestlé of its moneymaking market in water bottled under the Pure Life brand name.
Let’s take a look at this captain of industry’s views (video)

Do we want or need a man who chooses profit over life in control of water?
I think not.
But he is not alone Water is a right and should be conserved for the benefit of all, yet industrial agriculture  uses and pollutes a disproportionate share of this resource, even as millions of people die every year for lack of clean water.
This scarcity only helps to increase water’s value as an economic commodity —and multinational conglomerates are eager to profit from this deteriorating situation by buying up water rights on every continent.
Today about 90 percent of the world’s freshwater stocks currently remain in public control, but privatization is becoming more common as cash hungry governments increasingly cannot afford to maintain and repair crumbling municipal water purification and delivery systems.
Historically, however, in places where privatization has been established, it has proven to be another cause of—rather than a solution to—chronic water shortage problems.
This  because corporations are more concerned with making money than serving people’s and communities’ best interests, water privatization has led to corruption, lack of corporate accountability, loss of local agency, weakened water quality standards, and steep rate hikes that eliminate poor people’s access to water.
Clean Water is a basic human right we know this, we carry this message across the globe helping those without access install the necessary systems to manage their water.
We believe we are helping but are we really just installing a system that will eventually be privatized and used for profit.
Are we giving the corporations the infrastructure they need to enslave the planet?
This may seem like an extreme idea but if we face that very threat at home today it will spread in the future.
Let’s not allow access to water to become a privilege or enable it to be used a weapon of societal control.
Let’s keep it in the hands of everyone.
What do you think, is water privatization a good thing or a bad thing let me know in the comments below?
at January 10, 2018