Fame is something many people chase, the dream of being rich and well known is all some people

want.
But as the old saying goes sometimes you must be careful what you wish for as you may just get it.
In this video we look at the 27 club.
The "27 Club" was the name given to an unsettling trend of superstars dying as they careers peaked this coincided with them reaching the age of 27.
Originally, it seemed to be limited to famous musicians such as Jimi Hendrix and Jim Morrison.
However In the past few years, the club of 27 has grown to encompass more artists, like Anton Yelchin and Jean-Michel Basquiat.
These ten star deaths are considered the most compelling of the 27 club.

1.Ron "Pigpen" McKernan (1945-1973) the original front man of the Grateful Dead is noted for bringing the influence of the Blues to the band's sound. He died from gastrointestinal bleeding after complications from alcoholism.

4. Brian Jones (1942-1969) The original founder and leader of the Rolling Stones found dead at the bottom of his swimming pool.

10. Jimi Hendrix (1942-1970) details of his death are disputed. He took nine sleeping pills the night before he died. 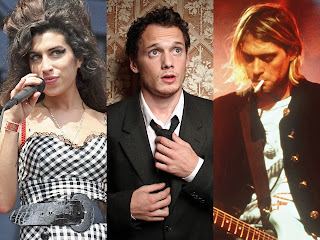 All of these stars dead at the age of 27!
And at the height of their fame due to tragedy and personal demons, but could there a more sinister undertone.
Would you sell your soul to obtain stardom?
Did these people make a deal with the devil?
The 27 Club is thought of by some as a group whom made this Satanic Pact.
They signed a contract with the devil so they may achieve fame and fortune playing rock and roll, this starting with the blues legend Robert Johnson.
Johnson supposedly had little to no talent playing guitar, but he wanted success.
The story goes that one night, he heard a voice telling him to visit the crossroads by Dockery’s plantation at the stroke of midnight.
When he arrived he was greeted by a large black man who was apparently the devil in disguise.
The big man took the guitar from Johnson, tuned it, and returned it to him.
The guitar was then offered to Johnson in exchange for his soul.
Returning from the plantation with the new guitar Johnson became a blues virtuoso overnight.
In 1938, at age of 27, he was poisoned and died and the devil claimed his soul.
An “anonymous” Satanic high priestess claims that all members of The 27 Club since that night when Johnson sold his soul have been promised fame and fortune.
They can have the fame their hearts desire but at the cost of their soul and in exchange for their agreement to teach youth of that age to serve Satan.
Special ceremonies are held during the recording of the artist this is when a satanic blessings is placed upon their music.
From that day on when the music is played, demons are called into the room.
These demons possessing the person playing the music and the people who are listening.
I feel you all deleting your music files and smashing C.D’s in an attempt to hold onto to your soul but wait just one second.
Actual statistical research shows celebrities aren't more likely to die at the age of 27.
56 is actually the age that has the highest death rate.
Or maybe that what the devil wants us to believe.

Let me know your thoughts in the comments below
If you enjoyed the video Please, please, please remember to subscribe
Maybe throw me a like or even share
Catch up with the latest @WeareIF
at January 30, 2018