Gnomes 'IF' There is proof?


Gnomes 'IF' There is proof?
Gnomes!
Harmless garden ornaments or a sinister group of angry little creatures?
Let’s take a look at what secrets these tiny garden guardians hold.
Traditionally thought of as diminutive spirits gnomes were first introduced to world in the 16th century. Since that time many authors have included these creatures in their works of fantasy literature.
Typically said to be a small humanoid that lives underground.
Dressed in a unique outfit of a loose smock like shirt, tight leggings, pointy shoes and the iconic tall pointed hat.
But could they exist in more than the ink found in the pages of story and fable?
Let’s take a trip around the globe and see if Gnomes are real.
Our first stop is Devon a county in the south west of England.
Plymouth, a town that sits on the coast and is famously known as the departure point of the pilgrims when they traveled to the Americas, and legends of pirates and smugglers.
Has the”Knockers.”
For the miners of Devon these mischievous little imps would make noises letting the men know of their presence hence the name ‘Knockers’.
It was believed that these small gnome like critters lived underground and often interacted with miners in the region they were ambiguous toward the men invading their subterranean space, doing both good and bad things to those working in the mines. 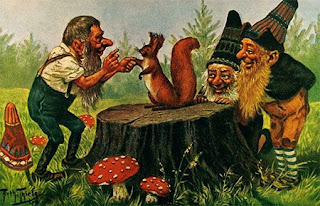 When these gnomes were having a good day they knocked to guide miners toward an ore bearing seam or as a warning of impending danger.
In some mining communities knockers were even said to appear from walls that contained a thick seam of coal or ore.
On their bad days though, knockers were to be feared.
Like most sprites and faeries the legends tell how they could get both mischievous and malevolent.
It was said that they were often to blame for stealing candles, picks and clothes. They also broke and sabotaged the miner’s equipment.

The legend tells us that it was fairly easy to get these gnomes on your side.
Just as in the stories of faeries whom are appeased by a bowl of milk, these knockers are appeased by something a little bit more common in southwest of England.
A hunk of pasty (the traditional food of miners)

But belief of and sighting of these little menaces is not only found in tales of old England but in modern times and from all over the world.
Let’s take a look at Argentina.
Back In 2008, reports began to surface that a small town in the country was being terrorized by a gnome.
The reports stated that a very small humanoid creature wearing a tall pointy hat had been seen. These sightings had gone on for quite some time, however it wasn’t until footage was captured that their struggle gained international attention.

As you can see in the clip this gnome like creature invokes real fear in those present.
It would seem that these gnomes like to get around as more footage was captured this time of a Gnome Crossing a Street.
A similar encounter, where a group is hanging out in the middle of a road, they then see a gnome shuffle across the road. This video again ending with the screams of the witnesses.
From Argentina we move to Mexico and a Gnome Attack.
A group is seen playing football. One of this group goes to pick up the ball, when a very tiny gnome jumps out and scurries away.
It’s unclear who startled who but again you can feel the fear of those that have seen the little human like creature.
What could these mini men be?
If not captured on film I would think, as maybe would others, that they are nothing more than fantasy. An imp created to explain the things that go bump in the dark.
Is there a possibility that these videos show something real, and if they do what could it be, could it be a small human?
The smallest humans ever discovered excluding genetic defects like dwarfism, were found on the Indonesian island of Flores In 2003.
Fossils discovered in a cave at Liang Bua belonged to an unknown hominin. This relative of modern humans lived between 60,000 and 100,000 years ago.
It stood at an adult height of 3-foot (1 meter) it was given the nickname of the "hobbit," due to its similarity with the race found in J.R.R. Tolkien's book of the same name.
This discovery changed the thinking of the time on the migration and genetic diversification of early human ancestors.
Is it possible that more extreme reduction in size could have occurred within our species this leading to what we know as gnomes? 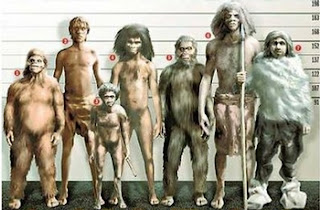 Island dwarfism occurs when a group of animals become trapped on a small land mass they reduce in size to better fit the environment.
This has been recorded across many species, we have seen dwarf rhino, elephant and tigers.
Could homo floresiensis be just the first human example that we have found.
Maybe a sub species of human continued to evolve to a subterranean life, growing ever smaller and rarely being seen.
When encountered by us it was seen as a magical being and the legends began to grow?
Radical changes in size are common when animals are trapped on islands. If we know about animals like the extinct dog-size giant rats of East Timor, an example of island gigantism, dwarf mammoths and dwarf dinosaurs as examples of ancient island dwarfism.
Why not an impossibly small human?
Could Gnomes be real and out there running around today?
Let me know what you think in the comments below
Catch up with the latest @WeareIF