The legend of Greek fire

The ancient Greeks have been credited as the founders of western civilization and culture.
They have been credited with giving us mathematics, philosophy and democracy.
They also had a rich mythology
They used myth to teach people about gods, heroes, nature, and their religion.
The stories they told map the globe, tales of adventure and life’s truths.
From Achilles and Poseidon to Hercules and Athena, these stories have preserved the most entertaining parts of Greek history well into the present day.
These myths and legends are still popular today, from Block buster historical movies like ‘Troy’ and ‘clash of the titans’ to modern reimagining’s like ‘the Percy Jackson series’ show that people still have a fascination with the Greeks and the stories they told.
But for as much as we know there is much that we do not, many legends speak of not just mythical monsters but magical objects.
These objects are often woven into the Greek heroic tales and this brings us to Greek fire.
So what was Greek fire? 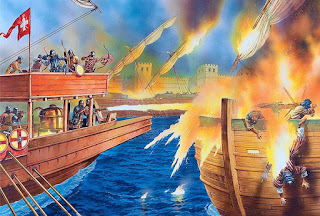 It was a weapon was used to defeat the enemies of the Byzantine Empire and repel invading hoards. A substance steeped in legend it was said to have been gifted to the Greeks by the god Prometheus.
The mysterious liquid was shot from pipes mounted on ships and city walls.
The would be attackers were sprayed in this substance which ignited upon impact, it was said to even burn on water making the oceans boil.
When these flames were dosed with water in an attempt to stop the blaze, it only grew larger engulfing more ships and causing massive devastation.
This was a weapon of terror and quickly became legend.
Any nation that wished to go to war with the Byzantine Empire knew they must face this ancient WMD.
A more accurate definition of Greek fire is given by the ancient history encyclopedia.
An incendiary weapon first used in Byzantine warfare in 678 CE.
The napalm of ancient warfare, the highly flammable liquid was made of secret ingredients and used both in catapulted incendiary bombs and sprayed under pressure so as to launch flames at enemy ships and fortifications. It was also used with success in defensive situations. Greek Fire became the most devastating weapon of Christendom for over seven centuries and ensured that Constantinople resisted all comers. Emperor Romanos II (r. 959-963 CE) knew its value and declared three things must absolutely never reach foreign hands: the Byzantine imperial regalia, any royal princess, and Greek Fire. As it turned out, the first two were, on occasion, bestowed on foreign rulers but never the third.
So this ancient weapon of mass destruction was of such value its formula was one of the best kept secrets of that age, even to this we day we cannot be 100% sure of what or how it was made.
Researchers believe that the ancient napalm was probably a combination of quicklime and naphtha or turpentine.
Quicklime or Calcium Oxide is a white, caustic, alkaline, crystalline solid at room temperature but Upon coming in contact with water, quicklime increases its temperature to above 150 °C and ignite the fuel.
On its own it is an effective weapon, Roman general Sertorius deployed choking clouds of caustic lime powder to defeat the Characitani of Hispania, and  Henry III used it to help the English Navy destroy an invading French fleet by blinding them with the substance.
Naphtha or turpentine is a hydrocarbon that is derived from crude oil it is very similar to modern petroleum and has the same properties.
It’s an easily ignited fuel source that can burn at high temperatures and float on water.
So how was this mixture used on the battlefield?
It could be launched in containers, these containers being varying sizes from large jars fired from catapults to smaller handheld vials that would be thrown like modern hand grenades.
But probably the most infamous weapons were the flame breathing beasts mounted on the Byzantine ships. 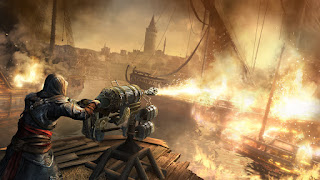 These ships had metal sculptures of a lions and other beasts on their prow, made from a combination of iron and brass Greek fire was pumped along tubes running into these sculpted heads.
They then spewed the deadly concoction over the approaching force.
A terrifying sight for anyone of that time, unnerving enemies and emphasizing the strength and ferocity of the Greek fleet.
The weapon acted like an ancient nuclear deterrent and thus was so secret the actual recipe has been lost.
And as is with most weaponry, it was eventually surpassed by gunpowder.
Gunpowder was widely adopted by all and Greek fire was confined to the annals of history.
Once again many thanks to Thomas H for suggesting this topic.
And If you have an idea for video let me know in the comments below
If you enjoyed this video please give it a like
at January 06, 2018