Ancient Civilization 'IF' There was a Nuclear war?

Ancient Civilization 'IF' There was a Nuclear war?

I hope you all had an amazing new year and my best wishes to you for the year ahead.
In 2017 we took a look at ancient civilizations and asked if we are the first to have possessed advanced technologies.
In the time between that video and this, there have been many more discoveries that are shining a light on these lost peoples.
From the discovery of an ancient city in a valley of the Mosquitia mountains, in Honduras, to the uncovering of a breath-taking temple in ancient Sumeria.
The science slowly rolls on and seems to be confirming what many believers in advanced ancient civilization already knew.
We are not the first! 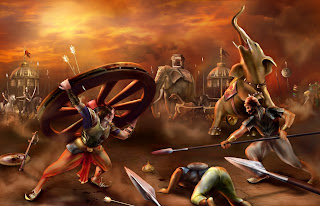 So if we are not the first what happened to these once great cultures, why do we have so little evidence of them today?
There are a many ideas as to what led to the downfall of these cultures from the legends of a great floods found in today’s history to meteor strikes and even war.
Today we take a look at the later.
It would seem almost fitting that today, as we reach such a high level of technological ability we find ourselves teetering on the edge of a third world war.
Is there an inbuilt reset button to human the race keeping us from reaching beyond a certain point of societal development?
That philosophical idea can be explored in another video, post a message in the comments below if you would like to see that.
So did war wipe out the ancients, whom was that war with and what weapons could cause such complete destruction?
There are theorists that have claimed to have discovered references to a large scale war occurring in the past over 4000 years ago.
Along with the claim of massive conflict, they say evidence can be found at many ancient sites and in many ancient texts that our ancestors had and used highly advanced weaponry.
And that these weapons may have been atomic in nature.
Probably the most well-known of these texts is the Mahabharata.
The story tells of a war between the gods in which weapons never before seen, were used to level cities and kill billions.
This war was said to have lasted 18 days leaving 1.6 billion dead.
The book itself reads:
“It was as if the elements had been unleashed. The sun spun round. Scorched by the incandescent heat of the weapon, the world reeled in fever. Elephants were set on fire by the heat and ran to and fro in a frenzy to seek protection from the terrible violence. The water boiled, the animals died, the enemy was mown down and the raging of the blaze made the trees collapse in rows as in a forest fire. The elephants made a fearful trumpeting and sank dead to the ground over a vast area. Horses and war chariots were burnt up and the scene looked like the aftermath of a conflagration. Thousands of chariots were destroyed, then deep silence descended on the sea. The winds began to blow and the earth grew bright. It was a terrible sight to see. The corpses of the fallen were mutilated by the terrible heat so that they no longer looked like human beings. Never before have we seen such a ghastly weapon and never before have we heard of such a weapon. (C. Roy, Drona Parva 1889.)
And in another passage there are yet more references:
“The very elements seemed to be perturbed. The sun seemed to turn. The universe, scorched with heat, seemed to be in a fever. The elephants and other creatures of the land, scorched by the energy of that weapon, ran in fright, breathing heavily and desirous of protection against that terrible force. The very waters heated, the creatures residing in that element, O Bharata, became exceedingly uneasy and seemed to burn. From all the points of the compass, cardinal and subsidiary, from the firmament and the very earth, showers of sharp and fierce arrows fell and issued with the impetuosity of Garuda or the wind. Struck and burnt by those shafts of Aswatthaman that were all endued with the impetuosity of the thunder, the hostile warriors fell down like trees burnt down by a raging fire. Huge elephants, burnt by that weapon, fell down on the earth all around, uttering fierce cries loud as the rumblings of the clouds. Other huge elephants, scorched by that fire, ran hither and thither, and roared aloud in fear, as if in the midst of a forest conflagration. The steeds, O king, and the cars also, burnt by the energy of that weapon, looked, O sire, like the tops of trees burnt in a forest-fire. […] We had never before, O king, heard of or seen the like of that weapon which Drona's son created in wrath on that occasion. […] Burnt by the energy of Aswatthaman's weapon, the forms of the slain could not be distinguished.”
This description sounds very much like a nuclear impact of coarse using the language of that time.
We now have to ask the question, if such a catastrophic war did actually happen what physical evidence remains to corroborate these writings?
We can look to an ancient city in Pakistan called “Mohenjo Daro”
This site is not a new discovery it was uncovered back in the 1920’s. When the sight was being excavated some usual things were found.
As the dig reached the ancient street level, skeletons were discovered scattered throughout the city, many of them holding hands and laid in the streets.
What ever happened to them must have been instant and horrible, but what had taken place?

To add to the question many of these bodies had no apparent cause of a physically violent death.
And the odd fact that we are interested in is that these skeletons are among the most radioactive ever found, their radiation levels match bodies recovered form Hiroshima and Nagasaki nuclear bomb sites.
But is this just one sight on which something terrible fell some 2000 years before Christ?
No, many other cities in the region show strange findings like vitrification the process when great heat converts minerals into glass.
And the discovery of an epicenter where everything was crystallized, fused or melted indicates a huge blast occurred.
And since there is no indication of volcanic activity at Mohenjo-Daro or any of the other sites, the intense heat needed to melt clay vessels and alike can only be explained by an atomic blast or some other unknown weapon.
We need to ask what type of weapon or what technology did they possess to create such incredibly high temperatures?
If it was a weapon who built it?
If it was technological what could have happened to create such heat and radiation?
Let me know you’re thought in the comments below.
If you believe Mahabharata got it right hit that like button.
at January 02, 2018