Tribes 'IF' These peoples exist?

Tribes 'IF' These peoples exist?

Humanity
We are one of the most prevalent creatures on planet earth
We have controlled our environment in such a way that we stack ourselves into high rise condominiums and live in densely packed congested cities.
But
There are those that do not!
We have seen the peoples living in remote areas and regions
From the tribes of Papua New Guinea to the lost tribes of the amazon, there are humans who live on the edges of modern civilization.
Their lives hearken back to a way of life long forgotten by those that live in the urban jungle.
There have been many mysterious groups of humans that are said to have existed.
In this video we at these groups and ask if they existed?
The first group we are going to take a look at are known as the Toda.
Toda people make their homes in the Niligiri Mountains in the south of India.
When Britain controlled India under the raj they became fascinated by the Toda.
Their appearance was unique for the region, they were of fair complextion with light eyes.
Their likeness was said to resemble that of ancient Greek statues.
They also wore unusual clothing for that region.
They wrapped themselves in cloth much like the highlanders of Scotland.
They had an unusual language known as Dravidian.
As a society they were a polyandry this is when a woman marries all male family members.
As a people they are considered a modal for sustainability and commitment with nonviolence.

The next group of humanity we will look at are even more mysterious.
The Yamnaya.
These nomadic people swept across Europe some 5000 years ago.
Originating from the Pontic Caspian Steppe they took technology and their ability to tame horses with them.
They were accomplished workers of bronze and used wheeled wagons to travel.
They traveled so wide and far that a large part of European DNA is from the Yamnaya and some say we can thank them for our ability to digest lactose and drink milk.
In Our third group we look at a tribe that is harder to believe.
The Blemmyes. 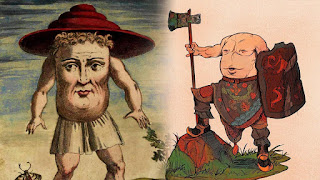 This people were said to be a nomadic race that existed from 600BC to the third century.
It was said that they had no heads, instead they had a face on their torso.
They were said to be cannibals and have been mentioned in literature for centuries.
They are often depicted as blood thirsty and violent and it was even said they were employed to guard the temple of Solomon.
The truth however is a little less spectacular, they often worked as mercenaries against the Roman Empire.
Over the centuries they fought for many different kings and queens.
As a culture they practiced sun worship.
Their religion was centered the temples of Kalabasha and Philae.
This is where a lion like divinity called Mandulis could be found.
From a tribe that was said to have no heads to a tribe that was to have the head of a dog. 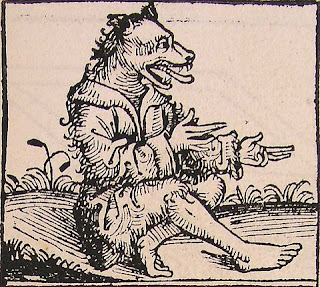 Known as Cynocephali these people had normal bodies with heads exactly like those of our canine friends.
It was said that although they could understand speech they did not possess the ability to speak.
They were said to be savage in nature, living to hunt and kill.
This people it is claimed lived around 400BC.
Reports from the time said that they originated in India near the Indus River.
They ate only raw meat and survived by hunting.
They were reported to be masterful warriors, with claims that they could not be defeated in battle.
It was also said that they lived up to 200 years, which would be amazing as they resided in caves and did not bathe.
One of these dog headed people holds an important role in Christianity.
Saint Christopher the patron saint of travelers is often shown as a dog headed man.
In his story it is said that upon meeting Christ hew was changed into a normal man on his baptism.
But more religions than just Christianity have dog headed men as part of their pantheon.
From ancient Egypt to medieval Germany they have stalked our history but are the real?
Let me know what you think in the comment below?